by Christopher Priest, Kyle Hotz, Sal Velluto and more
Collects Black Panther (1998) #'s 18-35, Deadpool (1997) # 44
Priest continues his storied take on the Black Panther as superhero political satire. To kick off this volume, Erik Killmonger, revived by the Resurrection Altar of Wakanda and by his own hatred of King T'Challa, makes a ploy to crash the Wakandan economy! Three steps ahead of his opponent, T'Challa crashes it himself, dissolves the Wakandan parliament, nationalizes all foreign interests, and crashes the global economy in response.
Add to that another tribal challenge by Killmonger, which King T'Challa never wins, and you have an amusing take for a couple issues where Killmonger, as the Black Panther, joins the Avengers. His whole life he had looked up to these people, but by the time he's Black Panther and sees them as equals, he has nothing but distaste for him. Pretty amusing:

There's so many storylines packed in this collection. My biggest qualm with it is the lack of emotional core -- and maybe that's a feature of the story. The characterization of T'Challa is that he's a good person...so good that he's willing to start World War III to protect an innocent child, as the second storyarc after the Killmonger arc. Black Panther as a character doesn't seem so personal, and as far as the comic is telling us, that may just be because he's not allowed to be a person -- he has to be a king. A king is beyond such things. This tension erupts in the next storyarc, when Malice, a former member of the Dora Milaje who turned her love for the king into a deadly obsession, begins to enact revenge on all the people that T'Challa's loved before. T'Challa has to keep the peace not just with her in the states, but at home in Wakanda with the tribe that she represents. 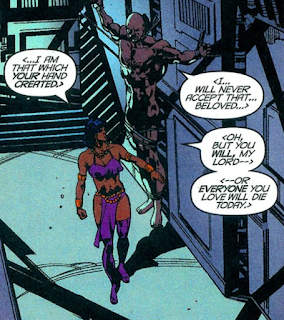 Finally, the Man-Ape returns in the two-part "Gorilla Warfare," unleashing another secret of the newest member of the Dora Milaje. Queen Divine Justice, the Chicago-born Wakandan learns that she is the last line of royalty of the condemned Jabari tribe, worshippers of the White Gorilla.
The major theme of this title is what it means to be a king and to be a man, but the main character handles them with panache. Unfortunately it's this same trait that keeps the character from taking off. More often than not, he is this faceless entity always planning and plotting for the sake of a disparate, diasporic nation. Certainly not your standard super-comic, and while the character is the hook, he's not the main draw, and it's the situations and plots that are at the heart of the title.
Follow chezkevin on rss | twitter
No comments:

The Batman Adventures was a continuity-free, all-ages(-ish) comic meant to follow up on the success of Bruce Timm's Batman: The Animated Series of the early 90's, itself a follow-up to the success of Tim Burton's Batman movies of the late 80's. They even used the same theme song!
What a time to be a kid. 8-year-old chezkevin caught the fever around the end of the series, but that was basically my first exposure to Batman. I loved it. I drew Batman on the walls around our house. My grandpa got me Batman shoes, and used the shoebox as his personal spice rack. I imagine opening the cupboard and it warms my heart to see that shoebox in there, a reminder of both my childhood heroes. My uncle got me the 1998 Batman & Mr. Freeze: Subzero animated movie on VHS for Christmas that year...from Blockbuster. Remember those?!?
For these reasons, Batman: The Animated Series will always be close to my heart. I'm a sucker for nostalgia. The way that Batman looks in this particular design will always be home to me. So it's a no-brainer that I picked up the 4-volume collection of the comic book spin-off. For whatever reason, these 10-issue collections are budget-friendly at $2.99 or $3.99 at comiXology. They're worth much more than that.

The Batman Adventures: Volume 1
by Kelley Puckett, Ty Templeton and more
Collects the first 10 issues of the 1992 series 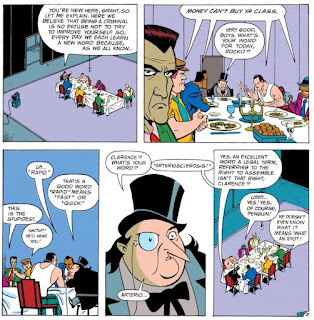 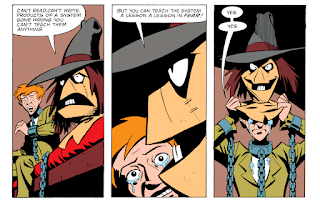 See the tears in his eyes. You can tell that he really doesn't want to give in, but he can't help it. This psychotic persona is the only way he can cope. Like a lot of other Batman villains, he's a victim of himself. 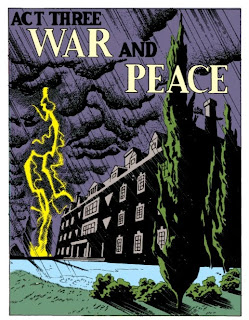 I love this scene. Really evokes the pulp origins of Batman. What an amazing piece of sequential art. 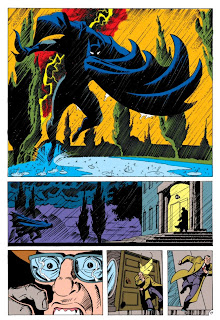 The art takes a dip when it transitions to Parobeck, but for the most part he's still serviceable. It's so difficult in comics to have both quality and reliability, consistently, but the sequential art remains strong with him. You can never go wrong with triple batarang action: 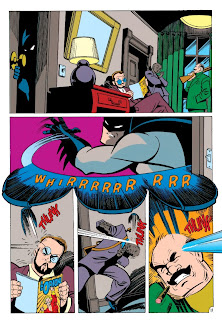 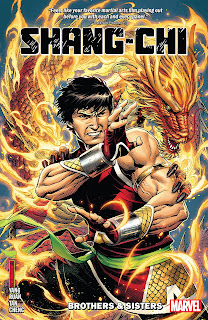 Ever since his Eisner-award winning coming-of-age story, American Born Chinese, Yang has been a writer to watch. To follow up, he's adapted the original radio play Superman Smashes the Klan to a 3-part graphic novel, written the Justice League of China, as well as co-wrote for the Avatar: The Last Airbender Dark Horse adaptation, among other things. Now, he takes on the Marvel universe's greatest fighter: Shang-Chi.
Shang-Chi's already had six omnibii of stories published, so you can tell there's some quality reads in there. But I have to admit, for all my years of reading Marvel Comics, I've never bothered to learn about him. If you're in the same boat as me, here's a quick primer: Shang-Chi is the son of one of the oldest Marvel villains The Mandarin, a man known for seizing power through a mystical set of items called the ten rings. Around the kung fu craze of the 70s', fostered by the Martial Arts superstar Bruce Lee especially, Marvel decided to capitalize on it like they had with the horror craze (Tomb of Dracula) and due to copyrights, spun off the story of The Mandarin's son, Shang-Chi. A master of hand-to-hand combat, he was raised by his father to take over his empire, but refused and, so the story goes, killed his father in a conflict.
That catches you up to now, where Shang-Chi is trying to live a normal life in San Francisco, as a bakeshop employee. Check those buns! 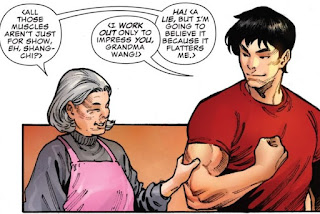 His rapport is effortless and it's obvious he enjoys working there. So of course his old life catches up to him, when MI-6 agent Leiko Wu tells him that his sister, also brainwashed by his father, is coming to murder him to claim dominion over the Five Weapons Society, a 300-year-old secret society originally developed by his father to protect China. Part history lesson, part family drama, all action: it's up to Shang-Chi to stop his sister. 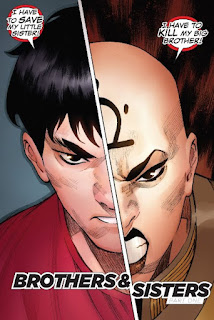 Shang-Chi makes some colorful friends along the way. He meets his long-lost brothers & sisters, children who were whisked away from China to protect the Five Weapons society, each of them trained in a different martial art. Shi-Hua is Sister Hammer, who murdered Brother Staff in the first issue, so we don't get to know much about him. But Esme is Sister Dagger, with her headquarters in Paris and Takeshi is Brother Sabre in Japan who accompany Shang-Chi to stop Shi-Hua. Esme is my favorite mainly as the comedic relief, but they each have their own personalities. 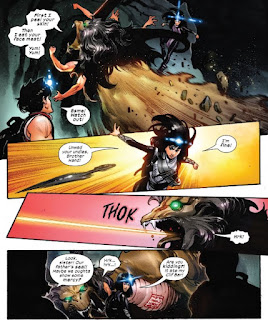 At the heart of the conflict is Sister Hammer's vie for ownership over the Five Weapons Society. Here's one thing that the writer does so well: she's not just the villain of the month. She has a story that we learn about over the course of the novel. She's raised an army of Chinese ninja zombies, Jiangshi and even infected Shang-Chi with the same zombie virus. But there's a mystical aspect to this army: they need three things to sustain their undeath: a dead body, spirit energy, and an unavenged grievance. In the last issue, Shang-Chi discovers that Shi-Hua is microchipping each zombie with the same unavenged grievance: her own trauma from her father. It was never about who's stronger or the better fighter. Might doesn't make right, and Shang-Chi shows his inner strength when he attempts to connect to his sister and mend her wounds over their abusive father. 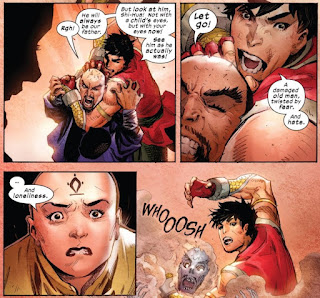 Philip Tan and Dike Ruan split art duties, with Tan on the flashback scenes and Ruan on the contemporary story. Tan's lines are scratchy and reminiscent of the 90s', while Ruan has a cleaner, more straightforward style similar to Stuart Immonen. I'm more fond of Ruan's, but it's important that they're distinct, since the split stories are quite different -- as it turns out, the Five Weapons Society has been a part of China's history for a while. It's here that Yang weaves in actual history, including the Boxer Rebellion (known in China as the Eight Nations Invasion), and the Opium Wars. Did you know Baron Harkness summoned Lord Dormammu and the Mindless Ones in that war? I didn't!
History is so important to identity, and the most powerful scene to me came when his uncle, a ghoul, attempts to commune with Shang-Chi, and so Shang-Chi uses a long-known Chinese ritual: the tomb-sweeping ceremony: 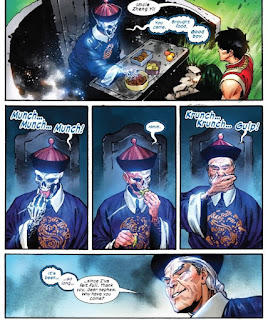 Among plenty of other things, this makes Shang-Chi a uniquely Chinese Marvel comic. His uncle could have communed with him in a dream, or in a séance. But instead he came to him a tomb-sweeping ceremony. It's extraordinary how his uncle comes to life after eating some of the food. This is the kind of stuff I imagine when I go with my family to the cemetery. We still do this today. We drive out there with incense, barbecue pork and paper money. We sweep the tomb of my grandparents and burn incense in front of their graves to wake them up. We eat rice cake, oranges and barbecue pork with them to nourish their bodies, and burn play money so that they have money to spend in the afterlife. My Gonggong, maternal grandfather, especially favored barbecue pork (who wouldn't!). In Chinese folklore, the dead still need food and currency in the afterlife and the tomb-sweeping ceremony is meant to connect with your ancestors in this way. In Shang-Chi's words:

It's a way to remember. To PAY RESPECTS to those who came BEFORE.
To remind ourselves that PAST and PRESENT -- aren't as FAR APART as they seem.

It's pretty wild to see this part of my life represented in a comic. Comic books are meant as windows to different worlds, and sometimes that world happens to be your own. Shang-Chi is this Marvel character with this storied past, and years of acclaimed comics, that can help with that. Marvel did a brilliant job with the artists for this comic book, and I hope they do it for years to come.
Follow chezkevin on rss | twitter
No comments: