Last month, I took a Spring Break trip with my family to China. It was my first time there, and I spent a week while everyone else took 3-4 weeks. It was my first international, overseas trip, so I wanted to take thorough documentation via pictures. We went to Beijing, the country's capital and then Taishan, my parent's hometown. Everyone else went on to places like Hong Kong.

Did you know that international flights have tablets on the chair backs? It was a 13-hour long flight, so we had amenities like a care package of socks, toothbrush, eye mask. 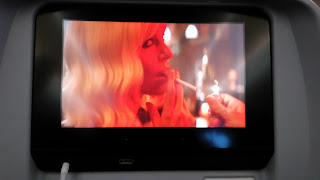 It was a unique flight for me. My fiancee and I sat in a row of three, with one unoccupied -- meaning we enjoyed the privilege of 1.5 seats! We watched Charlize Theron's Atomic Blonde, a movie I've had on my list for a while. The plane air system creates a lot of ambient noise that made it difficult to hear. I had earphones, but it must have been a better experience for my fiancee, who had a bulky pair of Beats.

I was thinking it was a modern spy thriller story, but I was completely wrong -- it's a spy thriller told in the era of Cold War Berlin, coated in a thick layer of contemporary German techno/pop music. Would have been nice to know beforehand, previews.

The meals are very fancy, though I was dismayed by the amount of packaging and tray usage on the flight. 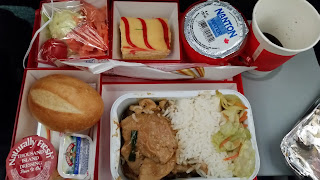 Did you know? In 2016, airlines produced 5.2 million tons of waste. Reading that article, all of the packaging makes sense, but I still think they could use less trays. We flew Hainan Airlines, which was a good experience, as far as 13-hour flights go.

I also watched the animated movie Batman and Harley Quinn on the flight, and have some words on it. It's in the style of Batman: The Animated Series and retains the voice of B:TAS icon Kevin Conroy, but it's much more racy than the original children's cartoon. There's a steamy scene between Harley and Nightwing, when Harley (gasp!) strips down in front of Nightwing, tied to a bed (gasp!). Your children's Batman, this is not. There are also fart jokes. If anything, this is a cartoon comedy that happens to involve Batman. The Batman show this ain't. 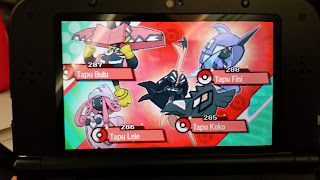 I also caught all four Island Guardians in my Pokemon Sun game! Outside of my productive flight with video games, movies, and power naps, eventually we landed in Beijing Capital International Airport.

The Airport is optimistically a half hour away from the heart of Beijing, but getting out is a little different. The plane taxis you to the ground, but from there you need to take a shuttle bus to the airport proper. It's your job to know which shuttle to take (there are people with signs), so you can take your correct transfer/exit/baggage claim. Not a user-friendly experience, but survivable.

Our tour guide was outside the gate waiting for us, and from there we checked in to our hotel at the evening. The next day, we had breakfast like you wouldn't believe. 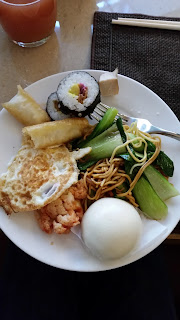 Fried noodles? Check.
Kimbop? Don't mind if I do.
Long johns? Yes please. The breakfast had everything we needed and more. Not pictured: bacon, congee, soup noodles, more long johns.

Our first day was a visit to a Jade gallery and then the Great Wall of China. There are some tours that are pushy and try to force you to buy something. In the past, my mom has spoken of the tour waiting hours for you to buy something, like some kind of high-noon showdown!

Thankfully that was not the case for us. Our tour guide snuck us in with someone giving a tour of the gallery, and jumped off when they started pushing products on us. I took it as a chance to walk around and take some sweet pictures of jewel art. 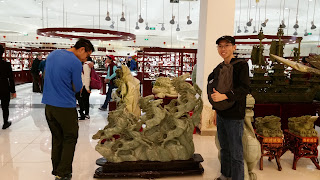 Jade is a special mineral in China and one of the country's biggest imports. Different emperors/empresses in history have valued it, and our tour guide told us of one who was given a Jade mouth in her grave!

Like many other things in China, Jade is subject to counterfeiting: here are a couple tips to help you not get bamboozled: hold the jade up to a light and it should be translucent, and, when you knock it on a hard surface, it ought to make a pleasant knocking sound. Jadeite is second to Diamond in hardness (6.5 and 10, respectively), and it's said that if you nourish your Jade for 3 years, it will nourish you for life.

Next up was the Great Wall of China. Some parts of the Wall are closed off for reconstruction, and it took us quite a while to get up to the right spot: a little village called Mutianyu. We went through the mountains and passed numerous villages, some that had even built an economy as resorts for Great Wall hiking. It was an enjoyable hike, not longer than 2 hours perhaps, and the top was a rewarding view. My poor mom got tired halfway, and sat down in the cabin area while the rest of us got to the top of our particular section of the Wall.

The Great Wall is also known as China's largest cemeteries -- peasants and prisoners were conscripted to work on the wall, and when they died of exhaustion (which was often), their bodies were buried with their work. Yikes. 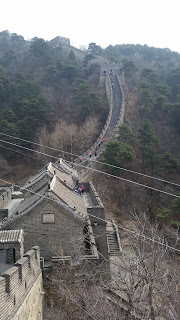 The rest area was a halfway point that also included a toboggan area. Fiancee and I took the toboggan, while everyone else walked the rest of the way down. Billed as "the Michelle Obama experience" (there are photos!) by our tour guide, it was a hoot. It moved quickly and while the line was long, we were consistently moving along. My one complaint was the slow people in front of me. You need to use the control stick on your toboggan: push it forward to go forward, pull it back to brake, and there was more than one person who didn't get it. Heck, the man in front of me was using his hands to push himself along the rail -- idiot!

We met up at the bottom, washed our hands and left. An interesting note about sanitation: things are generally more dirty on our trip than in the states. It may be partially due to the mugginess, but I never felt quite as clean as I do normally. The water isn't potable, and so if you want clean drinking water you need to boil your own water or purchase bottled water. Most toilets are squat toilets, although our hotel had sit-down toilets. Squat-ies aren't too bad. After an emergency at the Temple of Heaven, I got accustomed to them, and if you ask me, they seem more maintainable than sit-down toilets.

That'll do it for this post. Next time: the Forbidden City and Peking Duck! Have you been to Beijing before? Used a squat toilet before? Leave your comments below, and I'll reply!