That's right you guys. He's been gone for a while, but now he's back. It's the long-awaited return of the McRib sandwich.

. . . wait. Hold on. I'm confusing my Americas. Today we're talking about Captain America. I got ahold of Road to Reborn and Reborn, and got to finishing them as well. So get your flags ready, and put on your baseball caps, 'cause America's back, baby.

Issue 600 is super-sized, so don't let the issue count fool you. For a four-issue paperback, there's a lot of material, and the material is really repetitive. Each issue rehashes Steve Rogers' life in one way or another. Issue 49 has a splendid Marcos Martin-drawn set of pages that retell his life and times. Then over the course of the next few issues, Cap's teammates, Sharon, the Falcon and Bucky start monologuing the heck out of his life. Then issue 600 throws another montage at you! It gets tiring you guys.

What this trade tells me is that people are not over the Death of Captain America. Which is fine, he's a great guy. Did a lot of cool stuff. I'd just rather read some stories than keep getting told how great a guy he was, or how much people miss him. Y'know, because that's why I'm reading this thing. To get some stories.

Gene Colan does a super-special supernatural special for issue 601. It's. . . strange, to say the least. The anatomy is off, and there's this murky painting color to it. There are no panels, so the pages blur into each other. Bucky recalls the time Hitler set loose some vampires during the war, so it's this whole Cap n' Bucky vs. vampires deal, a little reminiscent of Mike Mignola's Hellboy-verse.

Lastly, here is a nice page about Bucky striving to live up to Steve's legacy: 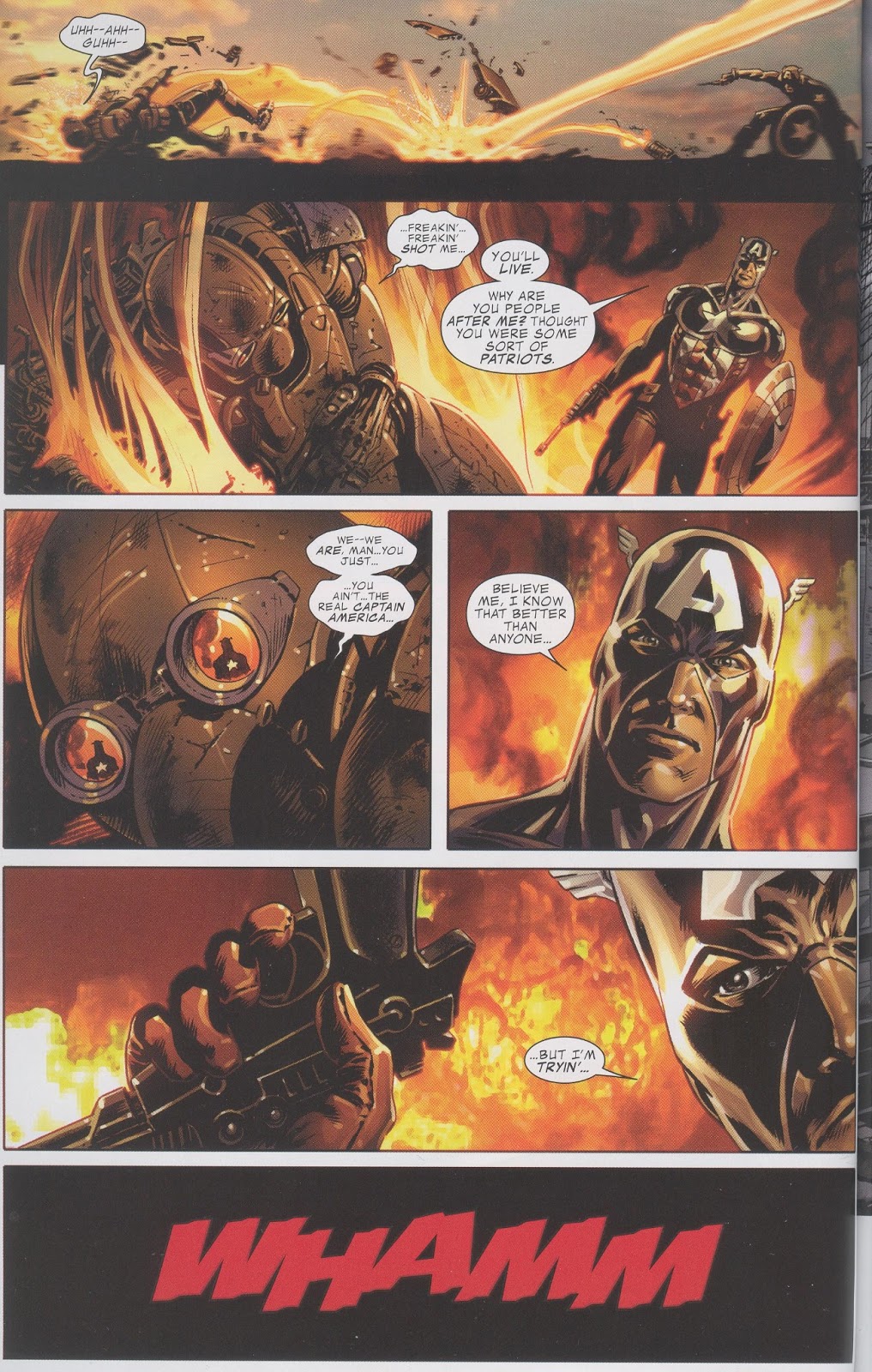 Remember Captain America's assassination? That sucked didn't it. Well, it turns out that the bullets used to shoot Cap, were time bullets, and so Steve Rogers' consciousness was stuck on a never-ending loop of the ridiculously exciting and tragic times of his life. And he can't do anything about it, otherwise his actions in the past will affect his future.

With some scheming from Norman Osborn, Director of H.A.M.M.E.R. and some collaboration with the Red Skull-bot from previous storyarcs, they force Steve Rogers back into their own time. It ends pretty much the way you'd expect, with a huge fight in front of the Washington Memorial, an army of M.O.D.O.K.s to kill the Avengers, a Red-Skull controlled Steve Rogers and a giant robo Red Skull to fight. 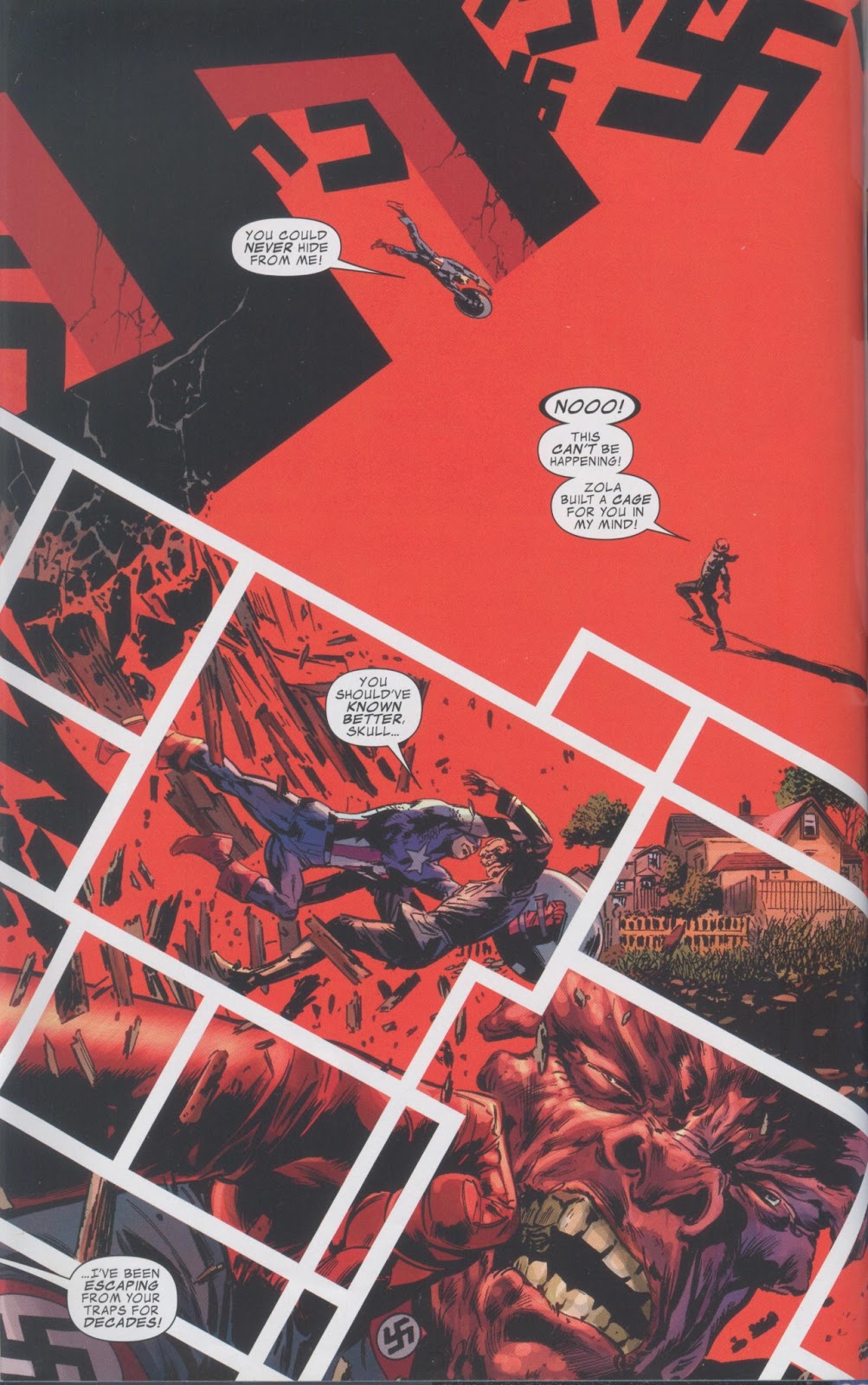 This thing is its own miniseries, and that makes sense. It doesn't fit the tone of Brubaker's Captain America title, and it has a way different artist. It reads like a big action movie, with a lot of wide-screen shots and splash pages. Although it doesn't have the intrigue that Brubaker's Cap does, tt's really fun to read, visually. It was a good way to bring back Steve Rogers, but I don't think it'd be a good introduction to the title or the character. 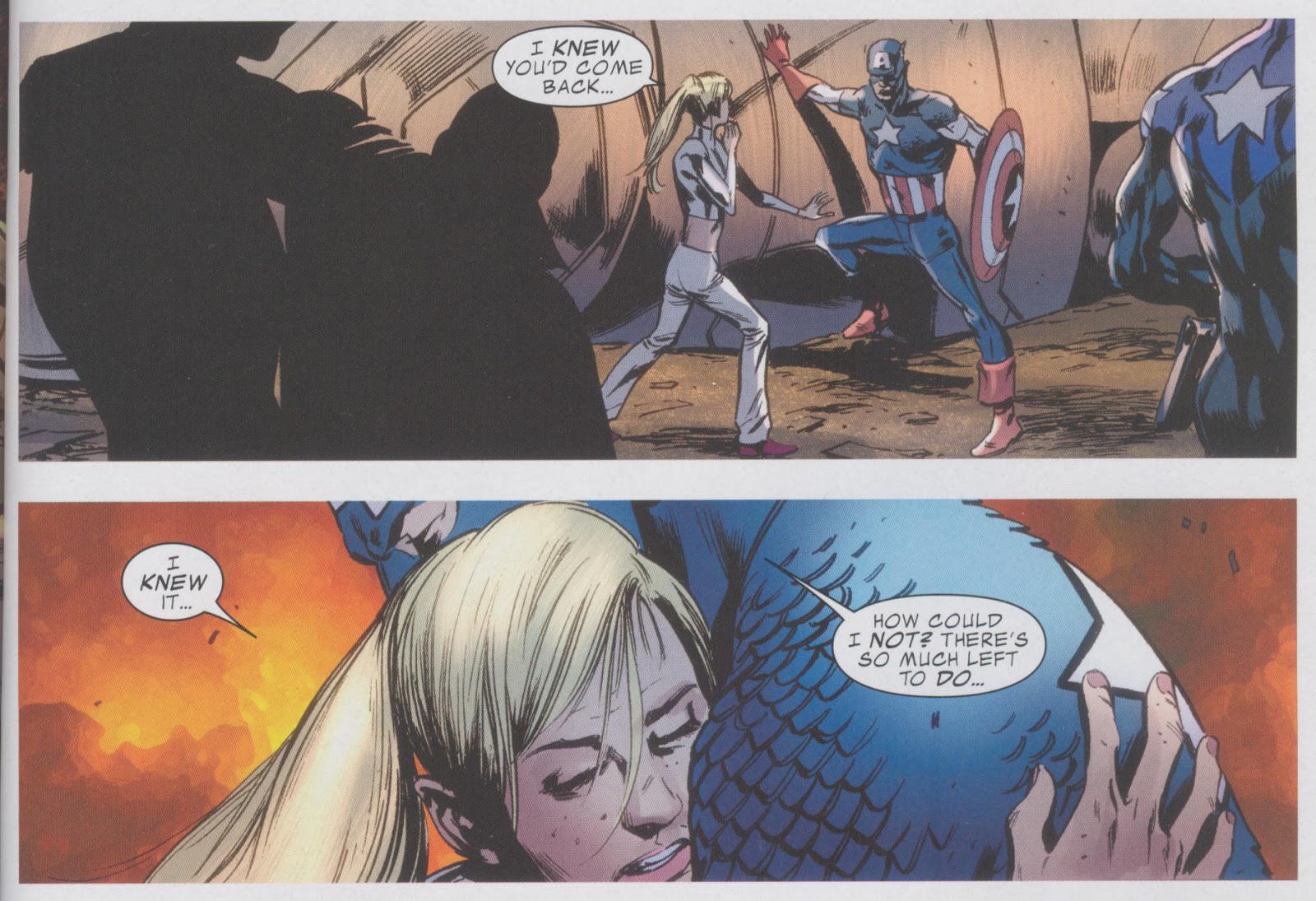 My scanner was not manly enough to capture the glory of this two-page spread. Dig the way his body takes over the two pages. It's a great shot! 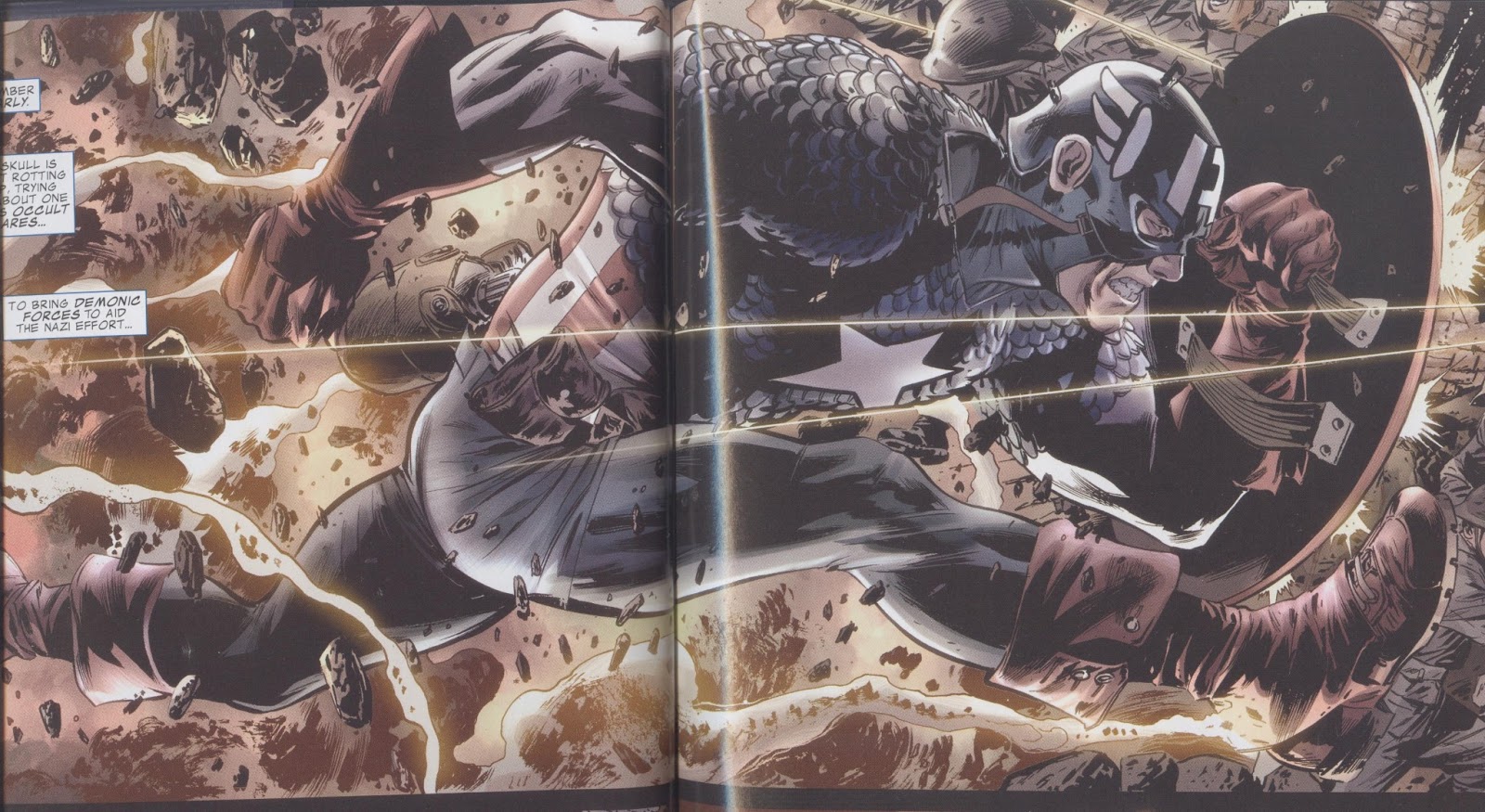 Check out Iron Man's supple buttocks. Metal has no right to be this sexy. 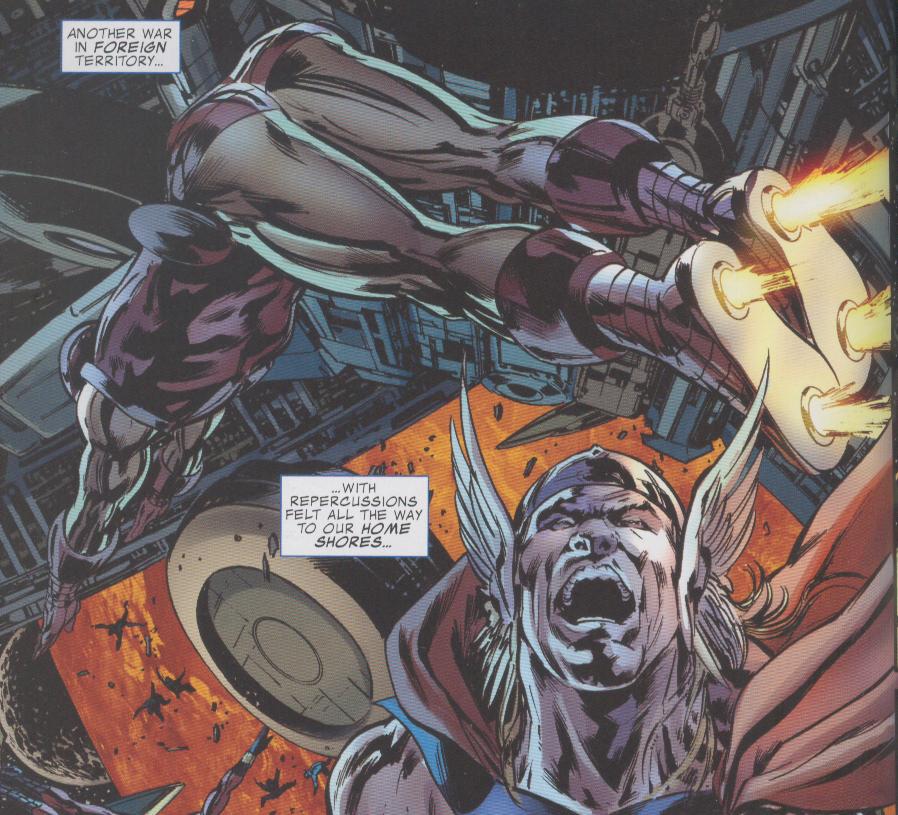 Verily, Thor would tap that ass.