aaaaaand we're back! It took some hot water, a little sweating, and a WHOLE lot of sleep, and even a bit of healing, but I am fine now! No more cold for Kevin, and the blog is back in town. . .

. . . hopefully for longer this time, too! Although with finals coming up soon, I won't be blogging so frequently as usual.

Anyways, in anticipation of Keith Giffen's Doom Patrol reboot with a Metal Men back-up, we are going to review today 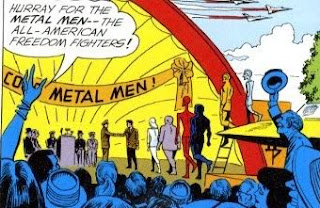 Metal Men is part of my attempt to read more DC books, and although I'm not too familiar with the main feature of the comic, Doom Patrol, I have enough faith in Keith Giffen and J.M. DeMatteis to give it a shot.

In terms of Metal Men, I really liked them in 52, I have a couple Brave and the Bold issues with them, and the reboot from Duncan Rouleau that was really confusing. 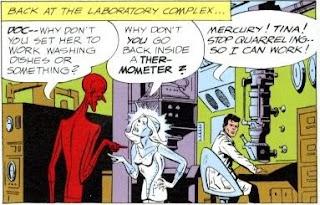 WHAT IT'S ABOUT: I believe these are the first Metal Men stories. They draw on 50s-era sci-fi, so we're talkin' about animate, anthropomorphic metals having adventures against freaky robots looking for wives, huge radioactive manta rays, and vats of chemicals that somehow come to life. Think War of the Worlds. Think Forbidden Planet. Stuff like that, in Technicolor! 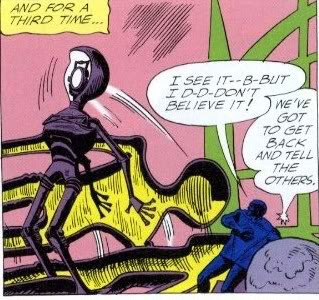 They really went wild with these things.

Also, there's an introduction by Dan Didio, whether we like it or not. He talks about how Metal Men was the first comic that he really grew to love.

WHAT I DIDN'T LIKE: The stories get really repetitive! In every issue, they make some inane comment on how, "Shush Platina! Why do you keep acting like a woman, when you're really a robot!" or, "Oh, Doc! I can't help it if I don't act as the robot I am! You were the man who designed me!" 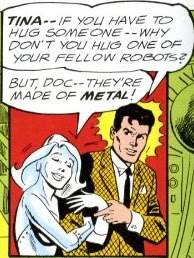 Along with other lines, it gets incredibly, painfully tedious. It's like you're reading the same issue over and over again! Arggggh.

Also, there's pretty much no characterization beyond, "That guy's a jerk. That other guy's really timid. That one girl has a hopeless crush on Doc Magnus. Yeah. That's all." The status quo gets kinda boring, guys. 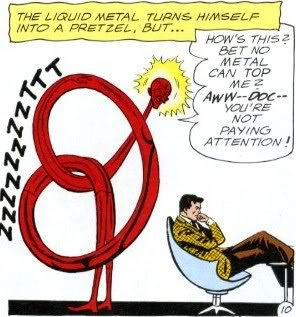 I can probably chalk these complaints up to, different era, different audience and stuff. That is why I am not the kind of person who'd pay 50 bucks for a trade like this.

WHAT I LIKED: Everything is sooooooo crazy! The concept of animate metals alone, each with their own unique personality! The gallant Gold! The timid Tin! The douchebag-y Mercury! The reserved genius, Doc Magnus! And so on. Now what's really stretching it is that these so-called "responsometers" are what give the metals their personality, but that's pretty kooky on the kooky gauge. 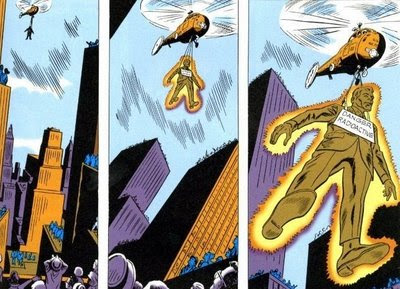 LAST THOUGHTS?: The problem is, the concepts lose their novelty after a while, so you really gotta do something to expand more on this. Flesh out these guys and give them more than bare bones (sorry), and give me a reason to care about them beyond, "Hey kids! Look! Mercury can turn himself into a pretzel! Whooooah pretty snazzy!"

Hopefully J.M. DeMatteis can work some magic on this. 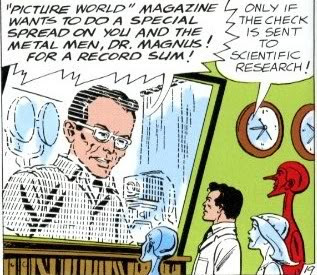 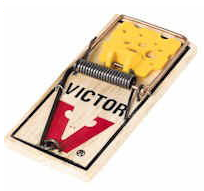 . . . that he even has his own brand of mouse trap.
No comments:

An epic tale from the distant land of. . . Newark!

Hi guys! The blog is back in business, and I have a couple comics to go over for today. Both of them I got on impulse, because both of them looked like campy fun. One of them came out last week, and the other came out this week.

Can you guess what they are? Keep on reading to find out!

Lockjaw and the Pet Avengers #1
by Chris Eliopoulos, Ig Guara and Colleen Coover

I really did not plan on getting this thing. The problem is, the 13-pg preview was just too adorable to pass up! You can find it here. Plus, Colleen freakin' Coover is doing the art, and I haven't seen her since I gave up X-Men: First Class, along with Ig Guara, who I haven't pal-ed around with since I gave up Marvel Adventures: Avengers! I was so weak, I even succumbed to buying the variant cover by Niko Henrichon. sigh. 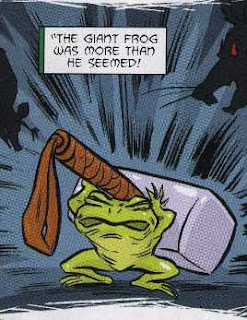 The comic itself consists of Lockjaw slobbering and teleporting and eating random things, while recruiting the pets of superheroes to reacquire the Infinity Gems. It's a pretty standard Avengers #1 issue with the "Hey you. Join the Avengers." --> "Sure." deal-y, except this time. . . they're animals! 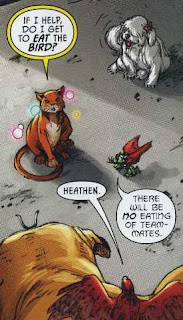 It is too adorable. I love Coover's storybook art for Throg's origin. Each pet has their own personality, from the dutiful Lockjaw (teleporting bulldog of the Inhumans) to the noble Throg (frog Thor), from the proud Falcon (Falcon's Falcon) to the grumpy Hairball (Speedball's cat!) and the depressed Lockheed (dragon to the now-departed Kitty Pryde), all the way to Ms. Lion, Aunt May's longhair pup! 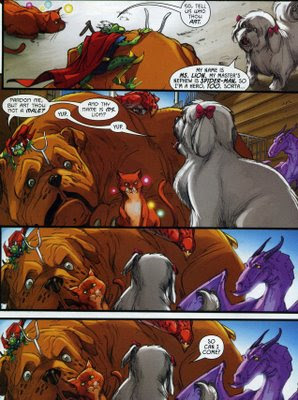 They really gotta be scraping from the bottom of the barrel there! Of the. . . four Avengers books on right now, this is the fun-est. Call me set for the next 3 issues of this mini!

This has got to be the most outspoken guy I've ever read in comic books.

Dude. Forget about Geo-Force. You're my new hero.
Seriously, look at the way he cheers Pee-Gee on! 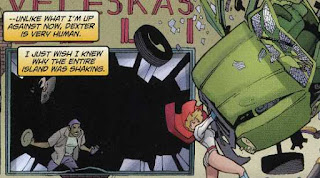 Anyways, Jimmy, Justin and Amanda take on the Herculean task of trying to make Power Girl more than just a pair of breasts. I didn't really think of getting this, mostly because well -- why would I wanna read about a pair of breasts? But then I read the preview, and there's certainly a lot of potential with her. The writers know how to have fun with, and not exploit, Power Girl, and there couldn't be anyone better to draw it than Amanda Conner! In the comic, Pee-Gee, AKA Karen Starr, sets up her own company -- Starrware -- and get this: it's devoted to ecological and environmental R & D! I can totally dig that. 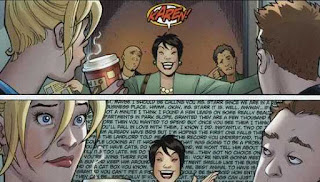 The Ultra-Humanite undergoes an assault on Manhattan, and the plot twist cliffhanger thing-y is really interesting! It's a good way to play on Power Girl's ubiquitous assets.

I could definitely see this as a superhero sitcom down the road, and lord knows we need more fun in our comics.

Let's do some MATHS 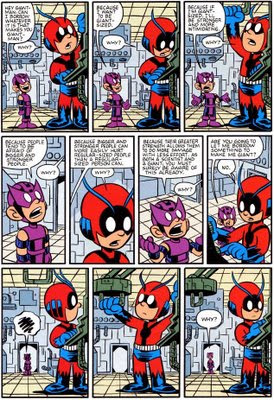 So if you haven't heard, I am getting no comics this week. The simple answer is that I forgot I had to feed myself don't want anything coming out this week.

Now this actually has a ton of benefits! 1) I get to save some money, and 2) we get to look at some old stuff I've had on my "to blog" pile! Hooray.

Strap yourself in, guys, 'cause I had way too much fun with my scanner today.

I bought this on impulse maybe a month ago, mainly because A) the cover has Captain America punching a portrait of Adolf Hitler. . . in the face, and B) Marcos Martin is doing le art, and C) this comic book is total fanservice. Referring to Marvel's original incarnation, Timely Comics? Total fanservice. Steve Rogers using a trash can lid as the shield of America? 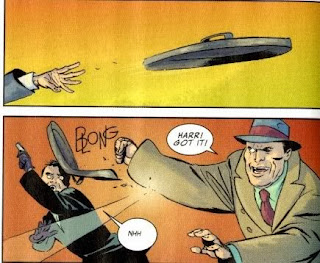 I feel like a story like this should have had a more universal appeal, and the little nods to the fans were a bit forced, but all in all it was pretty goo- 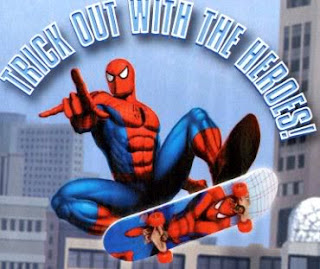 OH MAN! Spidey on a skateboard! I would totally hang ten with you, webhead.

There's a reprint with a 1941 story by Cap's original creators, and it's absolutely genius. If you ask me, it's worth more than the first story by a mile. 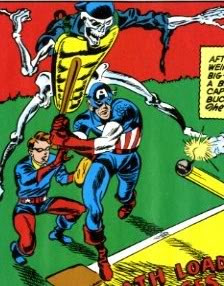 Steeee-rike three! You'reeeeee DEAD! The story is like something out of Scooby-Doo, where a local, fictional threat appears to be terrorizing the top baseball stars. . . and it's up to Cap' and the gang to solve the mystery!

Batman #686
Detective Comics #853
"Whatever Happened to the Caped Crusader?" by Neil Gaiman and Andy Kubert

This thing took way too long to get out to the stores, and I'd argue that it isn't really worth it.

I mean, it's nice and all, and it does a great job of martyrizing The Legend of Batman, but, y'know what? He doesn't really need it. He's Batman. 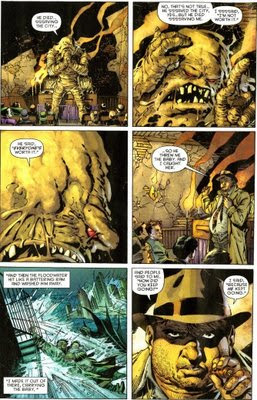 One of the great things about the arc is that it refers to so many different tales of Batman. You can spot Bill Sienkewicz Batman, Jim Lee Batman, All-Star Batman (with special Bat-stubble!), and even Adam West Batman. It's craaaaaazy the amount of references they stick in here, but it's both a strength and a weakness!

Comic books these days are impenetrable anyways, and you already have to know way too much to be able to access one of them. One by Neil freakin' Gaiman shouldn't have such liberal use of it. 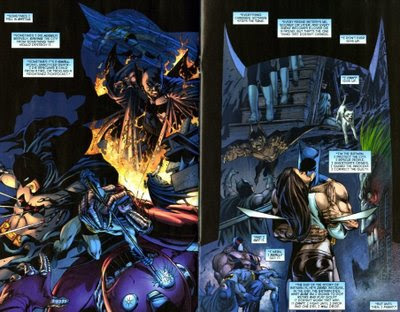 A funeral is nice and all, but it's not really anything special, especially in comics. If you ask me, this arc was all about the art. It's just so fun to see Andy K. drawing in all these references, in all these crazy panels of Batman himself. Plus, at the end of both issues are some of Andy's sketches. BatMite could've made it into the story!

Personally, I don't think this really belongs in the pantheon of Bat-classics like "The Long Halloween," or "Year One." Referring to so many other Bat-tales without trying to make its own makes it feel generic, so I don't think it has any real value by itself. You'd have to have read a ton of other stuff to really "get" it, so I think only Bat-fans to begin with would really like this.

I wish this were as thought-provoking as some of Gaiman's other stuff, but I guess he can't swing a home run all the time.

I hope everyone had a good Free Comic Book Day! Mine was great.

This week doesn't look too good for the blog. I will be, surprisingly, camping in Michigan this weekend. Holy crap.

WHAT IT'S ABOUT: This is Meltzer's high-profile reboot of a high-profile comic book with a high-profile artist. Make of that what you will. He rebuilds the JLA from the ground-up after Infinite Crisis, and it's a fairly entertaining take on superheroes. 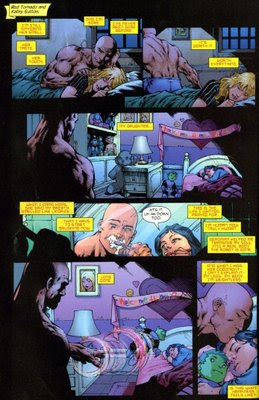 Well, he becomes a real man in this story. He also gets punched in the face lots of times, and his right arm torn off. And then eaten.

WHAT I LIKED: There's some nice narration here. You can really tell Meltzer's a novelist.

He even tries to spotlight some smaller members of the Justice League, like Vixen, or Red Arrow, or Black Lightning. 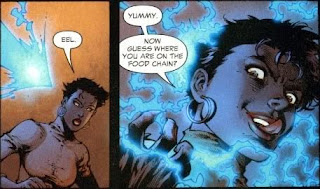 WHAT I DIDN'T LIKE: It's all nice and all, but, well, not all that moving. It just feels like a really, really standard superhero story. The superheroes get to show off their powers, and be buddies. That's it.

I dunno. Maybe it's because I'm more of a Marvel person, but I wasn't all that impressed. Meh. 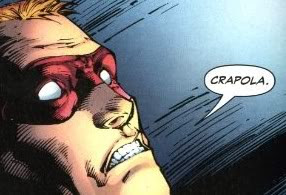 EXTRAS?: There's an introduction by Damen Lindelof, and outroduction by Brad Meltzer, and a 7-page dissection with Meltzer and Benes, and a variant cover gallery. That's a lot! 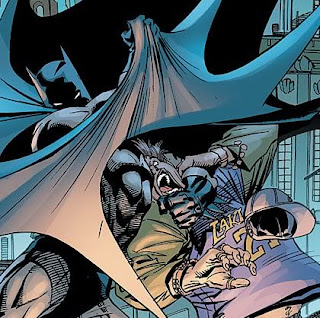