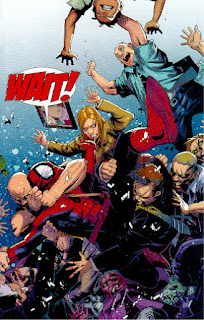 Aunt May is attacked by Kirby dots! 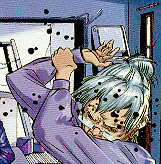 Spidey vomits on the Lizard's face!

But naw, I'm mostly playing with you. Issue 633 is part four of SHED in the Spider-Man title, and it closes the arc. In a single-sentence story summary: Curt Connors becomes a new, shed lizard that induces the reptilian brain over the mammalian brain across Manhattan -- dudes grab ladies to mate with them and people jump off buildings and such. It's a pretty odd premise that I think is treated too seriously by Wells, killing off poor ol' Billy Connors, resulting in a pretty tasteless story. In the last issue of SHED, Peter goes to May for some old-fashioned consoling, but she's still under the influence of Mr. Negative, and her internal conflict is portrayed as really graceless and tacky.

Which is to say: the writing is positively awful. Wells has done better work, like his Peter Parker, Spider-Man stuff from the past. The art, on the other hand, is positively brilliant. Chris Bachalo draws a frightful Lizard, a frenetic Spidey and some great paneling.

It's a shame that he needed a fill-in artist. It's also a shame that the issue came in late and had to ship with 634, the first issue of Joe Kelly's "Grim Hunt." It's another shame that the writing couldn't match the art. I gotta give it 2 Foam-Finger Freddies out of 5.