It's a new banner!

Superman punching himself, from Adventures of Superman #1, by Jeff Parker and Chris Samnee. 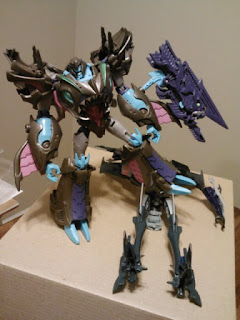 Much like Deluxe Soundwave, I wanted a show-accurate figure, but I was too late to the bandwagon and the prices had inflated by then. It's a heavy redeco of the Robots in Disguise mold, with an homage to the Sharkticons from the 1986 movie.

His limbs are sprinkled with this coral blue paint. I want to put him in a diorama of The Little Mermaid.

The robot mode looks great, but has a deceptive appearance that hides his flaws. The shoulder pads are in no way attached to his arms, and you need to disconnect some pegs in order to actually move his arms in a meaningful way. There are no ratchet joints on the figure, and his "sharktooth spear" fits only loosely in his hands. He transforms into a shark-faced Cybertronian jet: 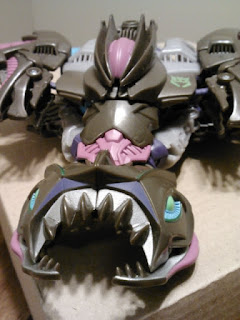 Again, it looks great, just look at that face! But it's a whole lot of, "rearrange the robot parts to look like a jet," and pins, pegs and ball joints hold it together, rather than the stronger joints I'd expect from a voyager figure. I'm not fond of the transformation. 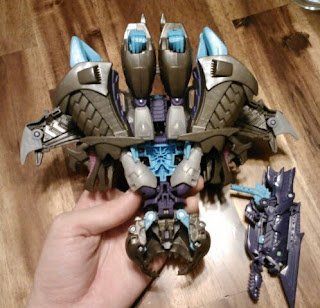 His head does poke out, if you open the lid, like ceiling cat but in reverse: 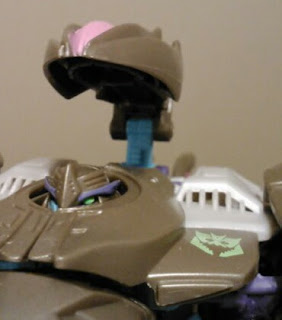 In summary, a nice-looking figure. I wouldn't transform him much, but he looks great in photos. 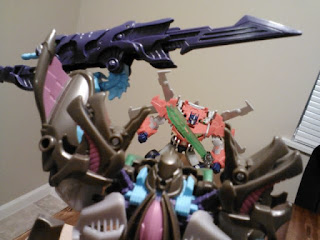