Best of May 2012: Action Comics #9, The New Deadwardians and more

Action Comics #9
by Grant Morrison, Gene Ha and co.
I haven't been following the nu52 Action Comics at all, but the preview for this done-in-one sucked me right in. It's the story of Calvin Ellis, President of America (and Superman) of Earth 23! Clark, Lois and Jimmy of another Earth take refuge in his, running away from "The Curse of Superman," an idea that they sold to a corporation which ran rampant with it. Read this two-pager: 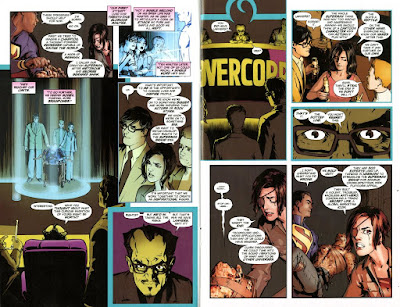 Do you get it? Morrison is explicitly having a jab at corporate cape comics. What started out as an ideal became a brand, to be marketed. It's the extreme transition from art to commercial, using the Superman story as an example. I'm really surprised they let Morrison run with this. Here's a last two-pager. I really like Lex Luthor in this issue: 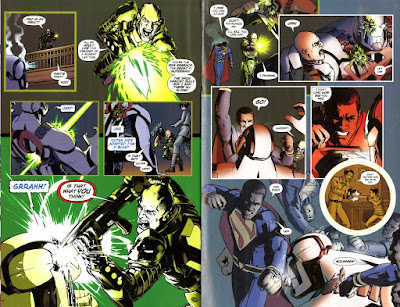 By any means, you should pick this up. It's a good comic book issue that engages one of the major issues in the comic book industry.

Atomic Robo: Real Science Adventures #2
by Clevinger, Cody, Reilly, Brogila, Speroni and Powell
There are four installments in this issue: a 4-pager, an 8-pager, 4-page, and then a 5-page reprint. I expected Clevinger to take advantage of the tighter space to tell tighter stories, but it's really only one beat per installment in this issue. The 8-pager has this last-page reveal that only regular readers would understand. That's frustrating to see in a comic that I want to enjoy. 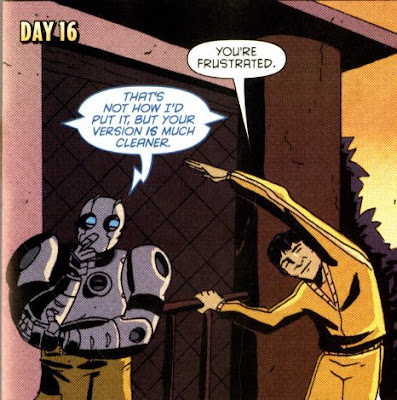 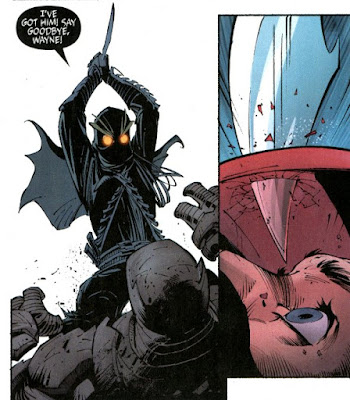 The "Night of the Owls" crossover event is literally one night, and that night ends here in issue 9. Snyder weaves this cute narrative about the bats in Wayne Manor, that frames the action. You get the impression that Bruce is at the end of his stick here, and it's the narrative that brings "Night of the Owls" to an exciting conclusion.

Batman Incorporated #1
by Grant Morrison and Chris Burnham
I picked this up on a whim. I haven't read any of the first volume of Batman, Inc., and this issue did a fine job of telling a story independent of that first volume.The threat seems to be a terrorist organization called "Leviathan," which feeds devil-branded cattle meat to their clients. . . or something. I'm not exactly sure what's going on with the bad guys yet, but it's certainly an exciting story to look at. 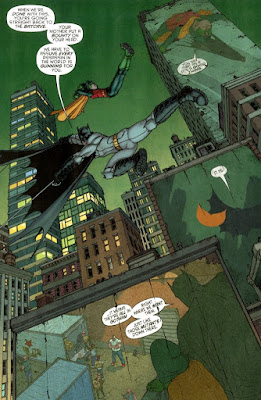 Check out this splash page! It's so creative, putting the panels of the comic book on the sides of the buildings that they're passing by. I love Burnham's design sense, and hope he can keep up with the shipping schedule.

Chew #26
by John Layman and Rob Guillory
Tony Chu takes a sabbatical. . . in the hospital. . . for this issue, so it's up to his siblings to hold the fort -- and hold it they do. Toni and Chow Chu take on the case of the kidnapped recipes in this issue, and it's a nice diversion.

Daredevil #12
by Mark Waid and Chris Samnee
This one is a nice done-in-one that tells the story of Matt and Foggy's time in college, as a story-within-the-main-story of Matt going on a date with D.A. Kirsten McDuffie. It's a bit contrived, but cute nonetheless. 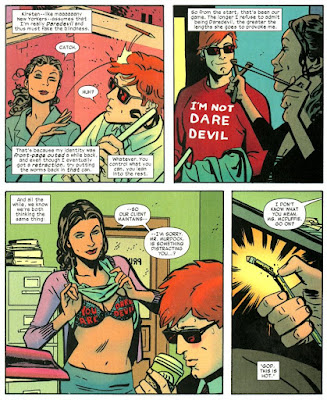 The ending is pretty random, and issue 13 came out the next week, so I decided to forgo that issue. I have no regrets!

The Flash #9
by Francis Manapul and Brian Buccellato
I'm really impressed with this issue. The creative team uses the theme of fear, and a flashback to guide the main narrative of Barry Allen -- The Flash! Escaping from the loopy world of the Speed Force and into Gorilla City, it's this flashback of his mother that returns his identity to him, and helps him overcome the fear and escape Gorilla Grodd. 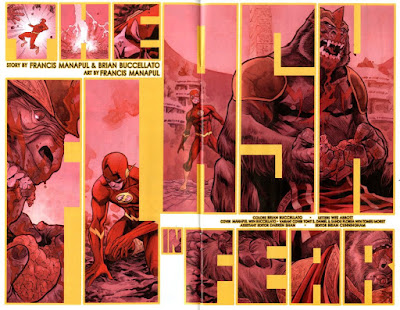 The New Deadwardians #3
by Dan Abnett and I.N.J. Culbard
Inspector George Tuttle takes a ride to Zone B (area of the "Bright," regular humans) in this issue, and the class differences rear their heads. Suttle explores a new aspect of his status as "Young," (a vampire), when he enters a boudoir in order to gain more information. His libido's been replaced with a thirst -- for blood. 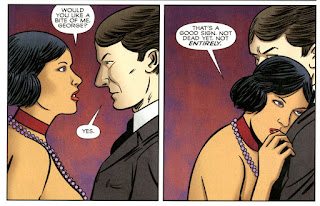 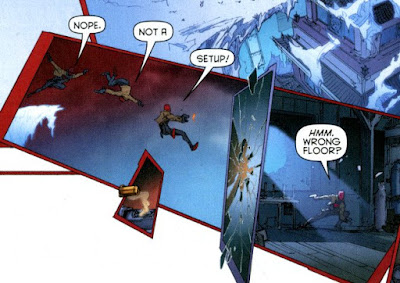 Isn't that panel amazing? It convinced me to buy the issue, from the preview, and I only partially regret it. The story is not particularly compelling, and there's a one-page change of heart that's supposed to be meaningful, but fell flat to me. 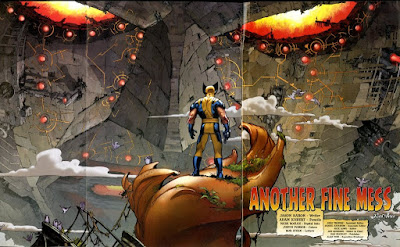 This is a three-page spread of Doom, the Living Planet staring down Wolverine, on top of the wreckage of the Statue of Liberty! In fact, the scanner at university wasn't big enough to scan this -- it cuts off the left side, which includes a narration box.