Batman: Gotham by Gaslight and The Walking Dead 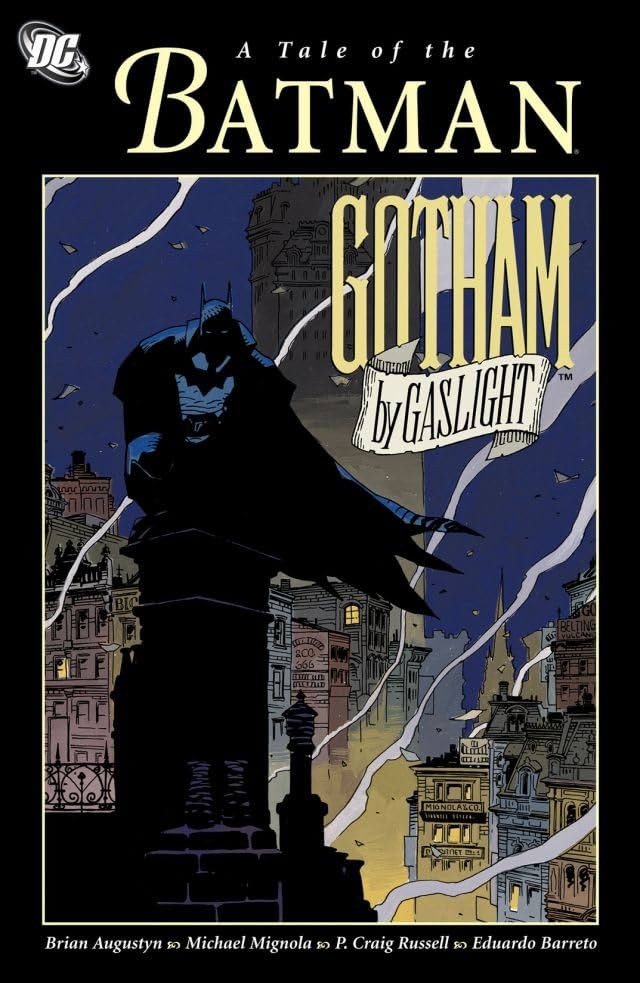 Batman: Gotham by Gaslight
by Brian Augustyn, Mike Mignola and Eduardo Barreto
This has been a longtime wishlist read for me and I finally remembered to place this on my hold list at the library. The paperback collects two short graphic novels both written by Augustyn, the first illustrated by Mignola the second by Barreto. They both ask the question, what if Gotham City and the Batman took place in the Victorian era?
The first story sees a young Bruce Wayne returning to Gotham City after training in psychology with his friend, Freud. Little does he know, there's someone else who's smuggled on board -- Jack the Ripper. Bruce dons the cape and cowl (for the first time? Don't recall) for the first time to fight crime and eventually cross paths with this Jack the Ripper as he murders women in the night of Gotham City.
Here's the twist -- the authorities jail Bruce for Jack's crimes, and so it's up to Bruce to exercise his detective skills, from jail!, and prove himself innocent before his execution, on Halloween!

It's a standard murder mystery that doesn't quite maximize the mashup between Batman and the Victorian era. It's no Batman: Vampire, and I wouldn't relegate it to more than a library read.
The second story, Master of the Future, takes place later after Bruce has -gasp!- found a lady, and --double gasp!-- hung up his cape and cowl. Only when a genius inventor claims to threaten the Gotham City fair does he don them once again. It's not a very winding story that's short on showing and long on telling. In general, both tales would have been 100% improved with more Batman shots. That's a great design, because you can see his eyes and he's in a collar. Just those two differences make it unique by itself.

The Walking Dead
by Kirman, Adlard and co.
What? An entire series? I'm not even going to dignify the Eisner award-winning The Walking Dead  with more than a few paragraph or two?
Yep -- you don't need me to tell you that the series is good. Try it for yourself, It would take me far too long to go through each arc, and in my opinion I'm not at the point where I can comment on each story.
For me right now, the best way to read this series is through the compendiums. Tomes that have nearly 50 issues of content in black and white. It's great! It's basically the equivalent of binging the series, and way faster than watching the series which, who knows, maybe I'll watch someday.
Mainly, it's a story about the man who helps people find their humanity in a sea of the walking dead, and slowly brings them back from the edge of their worst instincts to rebuild society. It's stunning that it ran for 193 issues, and the entire team deserves kudos for maintaining quality on it the entire time.
Follow chezkevin on rss | twitter
No comments: