So apparently Bad Dog #4 was released today. It wasn't listed on the regular site I check, and Image's site continues to solicit it incorrectly. It was never solicited for May, so this is completely out of the blue, too.

Bad Dog is a title from Joe Kelly and Diego Greco, published by Image. It first debuted in August 2010 and ran for three issues before going on a huge hiatus, which apparently ended today.

I had to see for myself over at comixology's website, which lists it as a recently reduced digital comic.

This is pretty crazy. I'm very fond of the title, and even though I didn't know it was out today, it's exciting to see it back on the racks. I found out after I already made my trip, so I called my local shop. They said they were sold out, and they weren't able to tell me how many copies of issue 4 they had originally. For all I knew, they didn't even know about this title.

I called Graham Crackers, the chain in Illinois, and they said that they had copies since March 2011 (the Loop branch itself received no such title today).

But it's out there, and it does exist. Here are a few reviews for the issue (I'm not reading them until I read the issue itself, and I WILL).
IGN gives it a 9/10, "amazing."
CBR has 5 preview pages.
ifanboy gives it perfect marks.

This is going to be my last post for a while, and it's a doozy (what does that even mean?). Between a camping trip this weekend, problem sets and midterms, I'm afraid I won't have enough time to talk about that wonderful medium that we all love, comic books. So, for today I will be talking about my weekend of Marvel The Avengers and Free Comic Book Day. After that I'll be on hiatus.

Here's a photo of an Avengers promotional at the avenue! I went to the Evanston Cinearts cineplex. Look closely and you can see the sixth avenger. 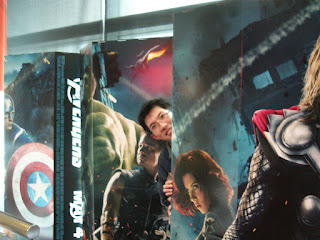 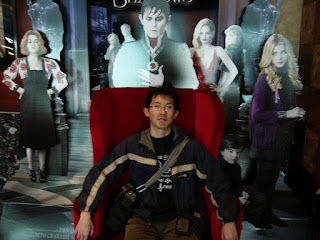 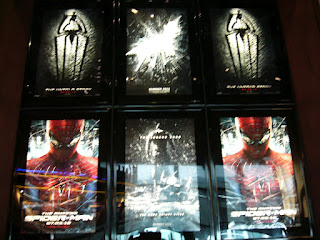 I enjoyed The Avengers, and it was certainly worth my movie voucher. My favorites were Captain America and the Hulk, and I'm really impressed with Mark Ruffalo's portrayal of Bruce Banner. His mannerisms were very well-done, and you got a good sense of who he is by the way he talked. I loved Ed Norton's Hulk movie, and I'd love a Hulk movie with this guy. Great team movie, great action movie.


Here's what I did the next day. I went to Free Comic Book Day in Graham Crackers Comics Chicago! Here's what the shop looked like: I went in the afternoon (1-ish), and there was a line -- check it out: 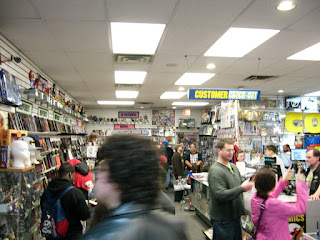 I've visited FCBD in that shop in a few previous years, and in none of those years have I had to wait in a line. Graham Crackers gave everyone a copy of the FCBD The New 52, which included a coupon for 3 free comics on any Wednesday from select boxes, and we got to choose 3 free comics that day from the FCBD selection! I brought my baby cousin and my friend. Here's my baby cousin on the bus ride back: 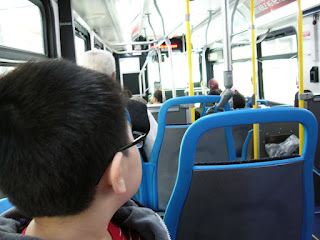 Here's another guy toting his comics on the same bus: 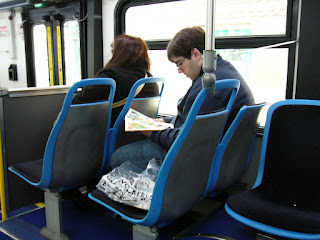 Graham Crackers was offering finger painting, and I was very hyped to get Spider-Man's web shooters face-painted on my wrist, but my friend was in a rush, so I didn't get my wrist face-painted. . . that night I took some Crayola markers and did it myself: 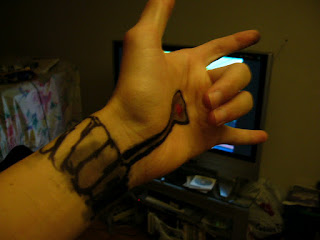 I also spent that night putting an order down for a few comic books, including 100 Bullets vol. 1 and Hulk 100 Project. 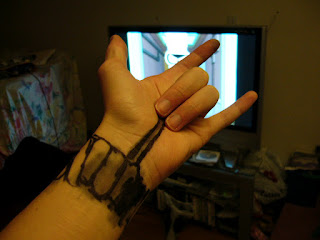 Now I'm off to debug code. I'll see you again in, I dunno, two weeks? Whenever I feel like it.


And lastly, here's this one panel from Archie Comic's Megaman.
Megaman's sister, Roll, asks him whether or not he needs his extra powers in the middle of an intense fight between robots. 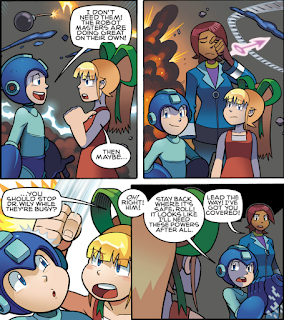 I love that second panel. You can see the action that's going on in the background: your eyes go from the explosion, to Megaman's self-satisfied face, to Roll's look of concern, to Time Man's attacks in the upper right corner. The second panel makes you take a visual pause, so the punchline in the third panel is all the stronger. You rarely see good examples of these visual pauses in comic books. There tend to be wide shots of backgrounds in the comics, intended as visual pauses but there's nowhere for the eye to linger! 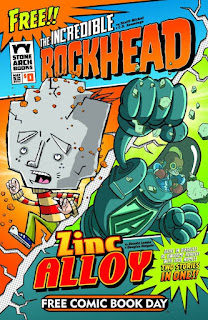 What is this???? I don't know, but it's free, and it looks awesome! I know what I'm getting this Saturday!

This title and more, at Free Comic Book Day's site!

Best of April 2012: Atomic Robo, Chew, The Flash and more

I picked up several titles in April, and here's a collection of my favorites! 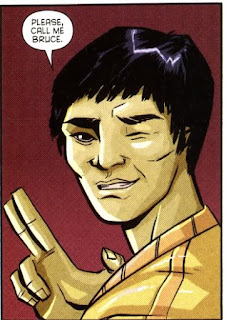 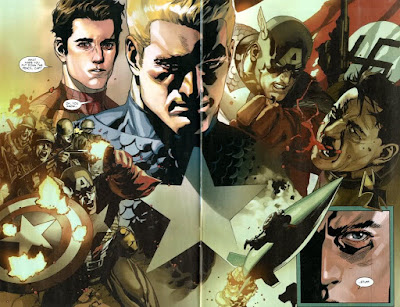 When Peter asks Cap'n about why he gave up his career as a comic artist, this is his reason. And it's a stunning one.


Batman #8
"Attack on Wayne Manor" by Scott Snyder and Greg Capullo
"The Call" by Snyder, Tynion IV and Albuquerque

"Night of the Owls" started in April, and I decided to jump back on. I'm so glad I did.

I love the use of the black space. Bruce has literally been in the dark as to the true nature of the city he grew up in, and the city he helped build.

The action scenes are clever, and they're not the only parts that are smart. Check out this chilling scene from the Owls. The feeling is genuine that Batman's up against some big odds. 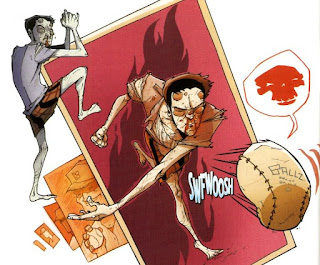 What an amazing visual. Now that Tony has a baseball, he uses the knowledge that he learned from eating all the dead baseball players, to throw a killer fastball. All the baseball players are behind him, and he's framed in a card-esque panel! 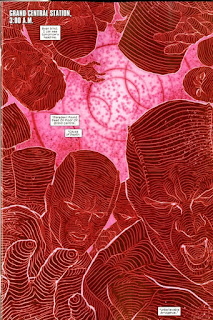 It's not too creative, and the issue doesn't hold up so well alongside other issues, but I'll take it. There's also an impassioned page from Daredevil that engages the theme of the reboot.


The Flash #8
by Francis Manapul and Brian Buccellato

Omigosh I loved this issue. 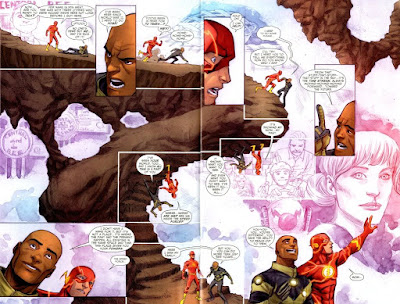 Man, look at this thing. I love it. Flash has ended up in a weird place, and he's meeting a weird person. He doesn't know what's what, and it's awesome.

Here's how the Speed Force works: 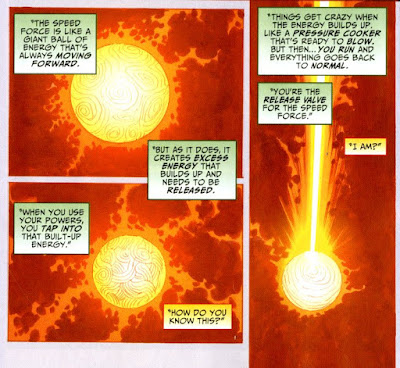 I love the close-up on Hynes' finger. You can see the anxiety in his face: it's the first time he's met someone since 1944, and he's scared about what to do. When I look at his face, I'm scared too, for the Flash and what Hynes might do to him. Without a doubt, my favorite title of April.


The Goon #39
by Eric Powell and Dave Stewart 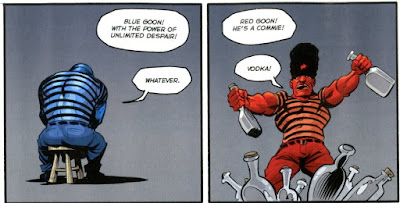 If you're on this blog, you might already get the joke. If you don't, here it is. 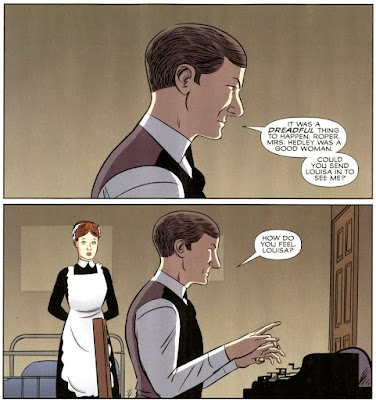 I really like this sequence. There's no need to show the time between "Send in Louisa" and, "Hi, Louisa" so these guys just leave it to the time in between panels. You see what you need to see, and nothing superfluous. Excellent piece of visual story.

The Punisher #10
by Greg Rucka and Marco Chechetto, with thanks to Mark Waid
It might just be me. . . 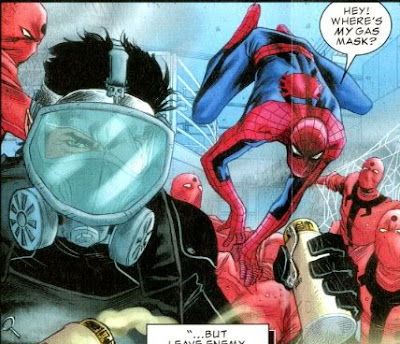 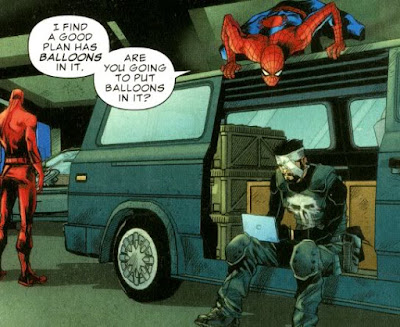 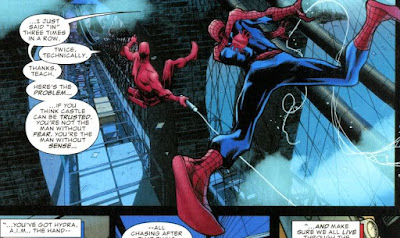 . . . but Chechetto must have a lot of fun drawing Spider-Man. 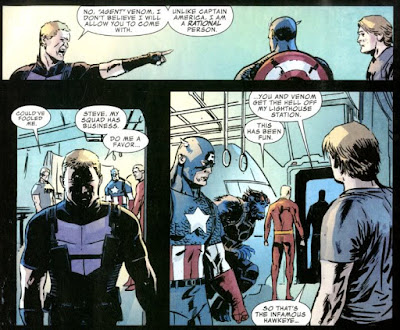 This is one emotional beat in an issue with a lot of turmoil, making it that much stronger. I also really dug the last page here, in which Ant Man reveals that he isn't dead. What, not even an issue where he's gone, and I'm already excited that he's back! That's good drama.

Marvel's The Avengers premieres on May 4. . . and Free Comic Book Day is on May 5!