Spider-Man Noir: Eyes without a Face

"We've got a new president and a new deal. And the same old homeless bums are still lining up for Aunt May's soup." Peter Parker, teenager and reporter at the Daily Bugle provides the hard-boiled narration in Spider-Man Noir: Eyes without a Face. It's same kind you've come to expect from Marvel's noir series. 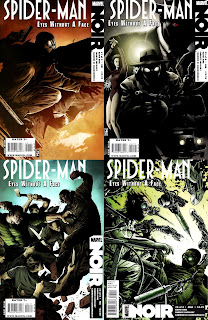 This is the sequel to the original Spider-Man: Noir, by the same team of David Hine and Fabrice Spolsky. This might be the biggest project they've done, because I don't quite recall a bigger project from the. To read my review of that, click-y here: http://chezkevin.blogspot.com/2015/01/spider-man-noir-not-your-mamas-spider_13.html.

When Peter defeated the Goblin in the previous series, he left a power vacuum that the Crime Master is looking to fill, a masked man that's marking his territory with dead bodies. This sequel also introduces you to the noir version of Sandman, a tough enforcer with skin as hard as rock, and Dr. Otto Octavius, a paraplegic refugee from Berlin who's come to America to continue his experiments on human neurology. Over the course of the four issues, Peter uncovers a neo-Nazi plot aimed at enslaving New York's African-Americans.

Peter takes it down with the no-nonsense panache characteristic of the Marvel Noir series: 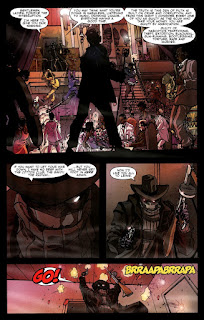 Recommended if you liked the previous series. Sorry there isn't much meat in this review -- I'm getting back into the hang of things. 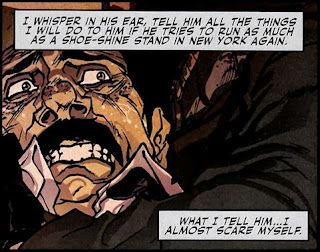