The Justice League 2017 film strongly follows the plot of this six-issue collection, so if you've seen that, you can just replace Steppenwolf with Darkseid, and you've got the story here. As for this review, well: come for the Jim Lee art, and stay . . . for the Jim Lee art. The script in this story doesn't call for much depth in this ensemble book, opting to introduce members of the Justice League one-by-one as caricatures. Green Lantern is the cocky man who thinks he can do anything, Wonder Woman is the battle-hungry Amazon. . . Superman doesn't do much beyond asking "What can YOU do?" to Green Lantern and punching Darkseid.
Marvel's take on the Justice League, the Avengers, worked because it organically brought together these characters that people had already gotten to know as individuals, for a cause that only they as a team could overcome. It didn't hurt that they were all located in New York City either. In Justice League: Origin, the super-heroes come together because of Darkseid's Parademons placing macguffins in major cities, like the Green Lantern's Keystone City or Aquaman's Atlantis. The heroes don't get along, not in the Marvel manner that heroes mistakenly get into, but in a teenage, who-can-piss-farther kind of way that doesn't garner any sympathy. This book is full of super-heroes bickering, fighting, and insulting one another, along with the widescreen moments, two-page spreads and splash pages those entail. In other words, it's long on action, but short on soul. Read JLA instead.

It becomes a running joke, to make fun of Batman for having no superpowers: 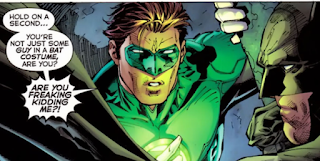 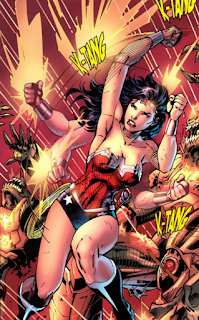 When the U.S. president asks if the group has a name, Barry Allen proudly tells them:

Bendis has this way with words that allows you to understand his characters. They speak with this maturity that allows them to express what they're feeling, and sometimes I get a little jealous of it. If only I could express myself with such maturity!

Anyways, there are two stories in this volume. Issue 10 is an abstract comic about J. Jonah Jameson's job for Jessica Jones, to find out Spider-Man's true identity. It's a character piece for Jonah as much as it is for Jessica, with a great gag at the end. I say it's an abstract comic because it challenges the format. Gaydos's paints are sometimes single-page splashes, and there are barely any panels separating disparate scenes. Dialogue is mostly placed on the side, but still in a recognizable way that you know who's saying what, for example, the below 3-page sequence.

A creatively fun, and funny issue from the team. Issues 16-21 tell the story of "The Underneath," a six-part epic started by an intruder in Jessica Jones's bathroom. . . Mattie Franklin, A.K.A. the Spider-Woman! It leads Jessica all around New York, stopping by Jonah Jameson once more, as the foster father of Mattie, and sets up vague hints at Jessica Jones's history. For people coming in from the Netflix series, that might seem a little familiar. Mark Bagley draws the hell out of these flashback/dream sequences, depicting Jessica Jones back when she had a super-hero alter-ego, Jewel.

What makes Alias so good is that its hero isn't perfect. She's a flawed person in a flawed world, but she knows the difference between right and wrong, and that difference matters to her. So she'll go to great lengths to save people, and when Mattie goes missing, it's important to Jessica to find out what happened to her. You see everything that works about a crime noir story, work in the Marvel Universe, and you find out about the dirty corners in what you thought was a squeaky clean Manhattan.
Read more Alias:
Volume 1
Volume 2
Volume 3
Volume 4