Now that "Venom, Inc" is over, Spider-Man can get back into the swing of things, pun. . . not intended. Immonen and von Grawbadger make the visual indication that we're back in Spidey's world, not Venom's world, and I mean the "Spidey" part too. Peter Parker hasn't unmasked in several issues, choosing to focus on his Spider-y life, and in this issue, the focus is on one villain from yesteryear: Zodiac, the man who assembled the Zodiac Key and understood a year's worth of happenings in the world.

Zodiac breaks out of his prison with 1 hour left in his year's worth of knowledge, so Spidey's on the clock to beat him. . . and beat him he does, with a twist! You don't need to know much about Zodiac beyond the intro blurb, so it results in a solid done-in-one issue with a neat and tidy "A" story, and a shocking "B" story on the last page.  Spoiler alert: Wouldja believe. . . Norman Osborn and the Carnage symbiote?

This is gonna be a good one.

That cover is after John Buscema's cover on Silver Surfer (1968) #4. But for most people, it's really their first introduction to that iconography. I think Unbeatable is the closest you can get to a modern Marvel comic. There's lots of callback to the larger Marvel universe, with threats of Galactus and Squirrel Girl teaming up with the new Doctor Strange, and there are these cute little annotations from the writer on the bottom of most pages. It's usually a little joke that expands on the page itself.

When we first saw the "surfer hunks" from last issue, I knew that there was something off, and it pays off here: turns out these guys are scam artists who go from planet to planet, heralding the (false) coming of Galactus and promising that they can ward them off in exchange for material goods. Squirrel Girl doesn't like people who take advantage of others, so she unknowingly gets in a tangle with. . . Norrin Radd, the true Silver Surfer! 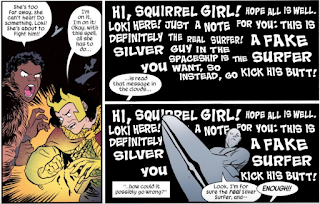 Unbeatable is one of Marvel's most consistent, consistently fun comic books. While it modernizes established Marvel mythology, it plays with them in a way that evokes the free-spirited optimism of the silver age.