Ah, the time is upon us once again. Generations of family get together to watch claymation Frosty the Snowman come to life. Friends gather by the tree to exchange presents. What's Santa brought this year?

Chicago hasn't gotten a lot snowfall for once, but it's Christmas all the same, so I've dived into my back issues for a little treat to share with you. The name of the issue is The Spectacular Spider-Man #27, from Paul Jenkins and Mark Buckingham. Together with J. Straczynski and John Romita Jr on Amazing Spider-Man, they made some of the best Spidey stories of the double-oughts, with a pathos and maturity that few modern comics are interested in showing. I have it in trade format, which you can find in Spectacular Spider-Man vol. 6: The Final Curtain. There's a one-shot where Spidey plays poker against the Kingpin, a second one-shot reviving the supervillain Mindworm, and a three-parter where Doc Ock teams up with a new guy and, that final issue with Jenkins and Bucky. It was their last issue ever, and the end for that run of Spectacular Spider-Man.

Issue 27 is pretty simple: Peter Parker visits Uncle Ben's gravestone to wish him a Merry Christmas, and imagines a conversation with him. The issue starts with an adorable young Peter Parker having a snowball fight with Uncle Ben. 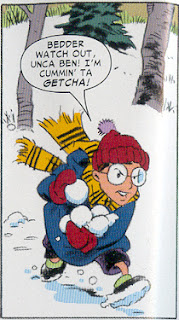 Then it changes to adult Peter, playfully tossing a snowball at Ben's gravestone before laying down a present for him. 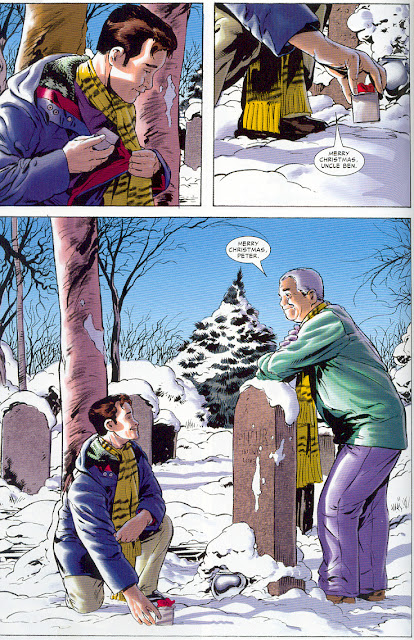 So they start talking about the weather, and about Aunt May's scarves. They make snow angels and Ben starts to prod Peter about his troubles. Peter talks about a nightmare he has, when he's running through a backstage. When he opens the curtains, a light blinds him, and he's surrounded by his worst enemies: Venom, Doc Ock, the Green Goblin. 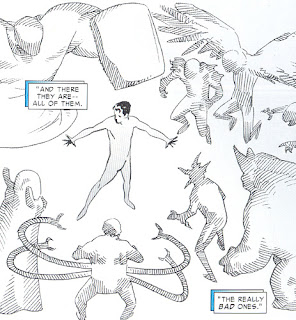 He can't escape his troubles, no matter how hard he tries. He feels guilty that he loves Mary Jane now, when he never got to tell Gwen he loved her. It's difficult for Peter to move on, when he'll never know if his parents would be proud of him. 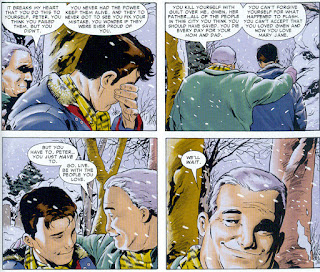 But the Uncle Ben moves him to live and be with the people he loves. Christmas is about memories, but it's also about sharing the time with loved ones. So Peter leaves, right after Ben tells him to send his love to Mary Jane.

That night, Peter has a good dream. 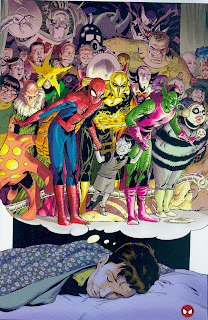 Issue 27 was "The Final Curtain," and it was for the creative team, and Spectacular Spider-Man. For an issue that was just an imaginary conversation, it was pretty damn good.

I´ve been looking for this issue so badly and you come up with this review (awesome, by the way). So I was wondering: If you have it, please please can I get it? Internet has betrayed me with this one.

Thanks for checking out the blog! I don't have a digital copy, but you can look for a physical copy from your local comic book shop: http://www.freecomicbookday.com/storelocator

The paperback is also available on Amazon for an absurdly low price: http://www.amazon.com/Spectacular-Spider-Man-Curtain-Marvel-Avengers/dp/0785119507 (I've seen similar absurdly low prices at cons and shops as well -- maybe Marvel overprinted it?)