Jack Kirby's The Demon Omnibus
collecting The Demon (1972) maxi-series, #1-16
by Jack Kirby, with an introduction by Mark Evanier

Jack Kirby, originally born Jacob Kurtzman, gets a lot of love, and that's for a good reason. He co-created the Fantastic Four, the Hulk and the X-Men, after all! When he moved over to DC, he created the Fourth World universe, into which I personally never got, and when the comics climate seemed to be moving over to the supernatural and horror, Kirby came up with the idea of an immortal man, Jason Blood, whose demonic alter ego, Etrigan, served Merlin of medieval times. The introduction is really useful, because it gives us the context in which Kirby created all this. He'd never planned on full-on writing and pencilling and inking the book, but DC were cancelling his Fourth World series, so he ended up doing this along with his Kamandi book. The stories in The Demon involve evil wizards/phantoms/ogres/immortal sorceresses using the occult to gain dominion over the world/Gotham City/Etrigan himself. The supernatural vibe was new to Kirby, so the work depicted has this experimental feel to it. 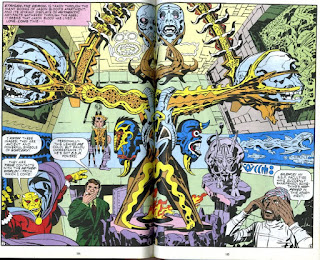 It might be the colors, or it might be the art, but The Demon has a Saturday morning cartoon feel to it, even if it deals with dark things such as the abusive relationship between a "Baron Von Evilstein" and his Igor, or the repulsive face of the once-famous opera singer Farley Fairfax. 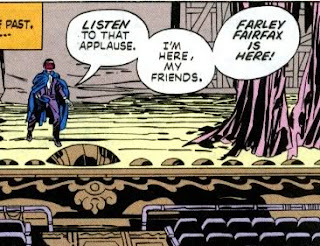 It feels like a Saturday morning cartoon, mainly because whatever conflicts arise in the story, they're easily resolved by the end of the issue or arc. Jason Blood and his cohorts have this dry, blank personality embedded onto them that make only Etrigan's life compelling in the least.

The introduction echoed an anonymous comment that The Demon was a book about life and death. I don't really see where that comes from, so I'm afraid I can't analyze it on that level. I'd rather read it as an exploration of Kirbyisms. Being in color, you can see the way Kirby draws anatomy, as well as his design sense. He has this metallic way of drawing muscles, and you can practically play a game of "Spot the Kirby dots." I also dig the way he draws Etrigan's cape. 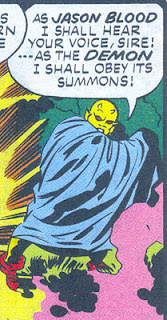 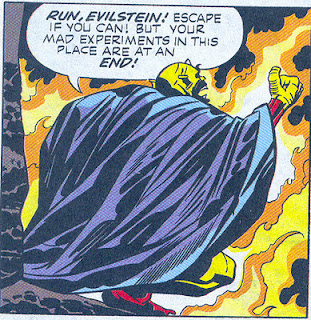 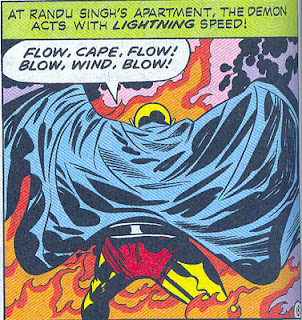 If he didn't enjoy drawing The Demon, it sure looks like he did. Check out this sequence around issue 15. 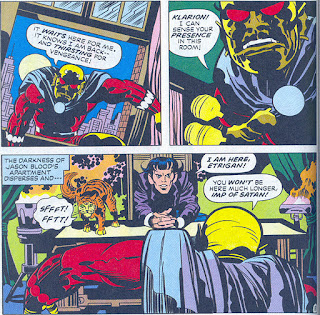 Isn't that first panel just wicked? It demands your attention with the way the window is tilted, against the comic panel itself. Here's one last sequence that I liked, that does a really good job of using the words, supported by the art, to emphasize a dark, horrific moment. 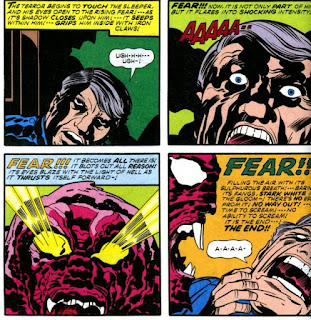 I'm really glad the library had this, because there is no way I'm paying $50 for it, but it's a great way to sink your teeth into Kirby. After every other issue or so, they'll feature a rough sketch page from Kirby, and they also number every page in this hardcover -- this really helped me out as a blogger, as I could jot down the page number of something I liked and go back to it to scan it and show you guys. The reason some scans differ from others is that I used my home scanner vs. the scanner at university. Them's the breaks.

One last note: If any of you followed/read Chris Sims' original blog, the-isb.blogspot.com, his slogan was, "I'm unleashing every horrible thing you can imagine! CAN YOU TAKE IT?" This is, in fact, a nod to Kirby! Specifically, the cover to The Demon #13. 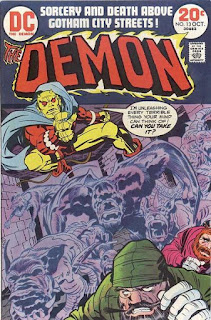