tooth decay. On this dread evening of all hallows, sweet tooths and skanky costumes, please be safe! And have a frightful, fruitful, Halloween guys!

From DC's 52, by several wonderful people. This is volume three.
No comments:

Well that's new to me. 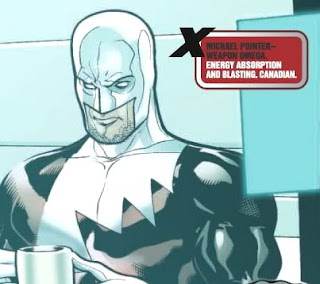 I didn't know that being Canadian was a superpower!
1 comment:

This week I did not get any comics, but you know what? I got some last week and the week before that, so let's not leave them all by their lonesome.

I have been hanging on to this title since issue 1, if you're curious. It's a nice title and all, and it's pretty fun too, but it's just so hard not to see Power Girl as another one of DC's generic super-heroes. Even when you add way hot alien party girls to the scene, Power Girl is pretty generic. So much of her dialogue is just a simple grunting word! 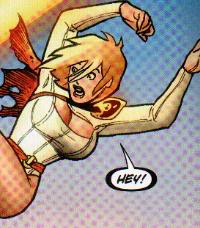 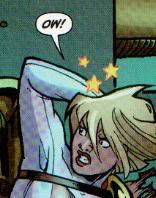 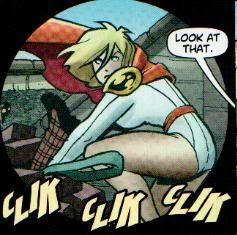 Despite the title, this comic isn't about Power Girl or her boobs. It isn't even about the perv who's totally stalking Pee-Gee. Not really. It's about funny sight gags, and goofy jokes here and there, with Power Girl on the side. As always though, Amanda Conner totally rocks the title with wonderful expressions, with that "Whoa." panel up top, for example.

Anyways, Power Girl as a title: it's not great, it's not good, but it's fun-er than your average DC comic book.

Surprisingly, this comic contains more than just Catwoman's boobs or Poison Ivy's butt. It also contains Harley Quinn's legs. It also contains an actual story with some pretty sweet art. The inking has really stepped up since issue 1; it's a lot tighter with more detail. March has kinda toned down the cheesecakiness of his pencils, yet he's retained Poison Ivy's "I don't need gravity." hair, and does some great facial expressions, especially with Joker. It's the best of both worlds!

So yeah: Harley hooks up with Hush, who's masquerading around Gotham as Bruce Wayne, which pisses off Joker. Naturally, both of them try to kill her. It's like some weird sitcom love triangle! Oh that Harley. What will she get into next?

I expected Joker to get a bigger, you know, fanfare in returning to a Bat-title, but no such luck. He's treated a lot here like the 1960's Cesar Romero "I'm gonna wreak may-ay-ayhem in Gotham and you can't stop me!" Whatever.

All in all, a fairly entertaining issue which gets me excited for the next one. You couldn't ask for more.
No comments:

Email ThisBlogThis!Share to TwitterShare to FacebookShare to Pinterest
tags: .DC, /cover to cover

WHAT IT'S ABOUT: Take one sleazy Depression-era city with all its squirrel-sized rats, mob wars, rough-and-tumble bunch of dirtballs and add ZOMBIES and demons and whatnot. Need I say more?

Okay, well, THE GOON is one tough guy with his pal Franky, and he's A GOON for a mob boss called Labrazio. He fights turf wars with The Priest, a zombie who reanimates the dead as well as the Feds. All in the first three issues of Eric Powell's first miniseries THE GOON!

WHAT I LIKED: The humor is pretty great! A good portion of it's over the top, but hey, we're dealing with ZOMBIES here. Vampires, werewolves and the occasional demon-possessing-my-child come into play too. 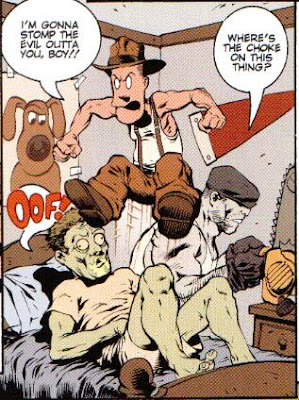 Not only that, there's also a little mystery about the Goon's past: what's his real relationship with Labrazio? And so on.

WHAT I DIDN'T LIKE: Some humor might come off as flat. Franky running over people, for example. It's also a lot of information in three issues, so that might get some people winded.

EXTRAS?: Oh man oh man, there are so many extras here. Powell talks about the evolution of THE GOON, several concept sketches, a few pin-ups, and the original THE GOON comic strips that appeared on thegoon.com! Pretty impressive. 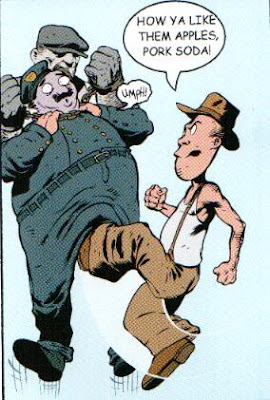 FINAL THOUGHTS: A pretty good outing, and the art gets even better as Powell refines his style. The Goon creates a world for itself, and thrives in it, so it can only go up from here. 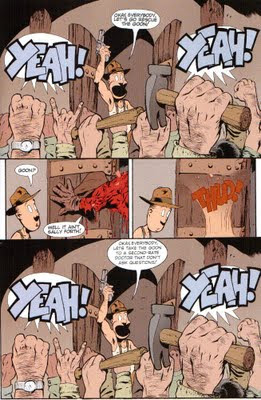