Issues 15-16 tell the two-part story "Royal Flush," featuring Captain America foe Ana Soria, AKA "Spider Queen," a woman who's able to control folks with the "insect gene," which Spider-Man apparently has. It's an extremely straightforward story, one that could be told in the (kid-friendly and now defunct) "Marvel Adventures" imprint of Marvel.

Well, it would be extremely straightforward, if not for the fall-out from Peter's forced kiss with the Spider Queen, leading to some tension between him and MJ for the next arc, and a terrible, horrible, no-good very-bad transformation for Peter. 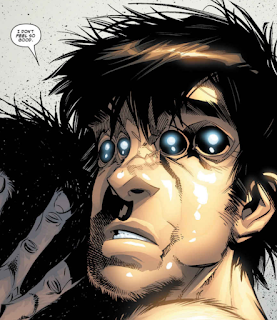 That first kiss was all part of Ana Soria's plan to reshape Manhattan into a world of insect drones. Predictably, it doesn't work out, and I can't help but feel this was only a re-hash of another "Peter almost undergoes infidelity" story, similar to 2003's "Peter kissed the bug lady Shathra" in J. Michael Straczynski and John Romita Jr's Amazing Spider-Man. But worse, and, combined with Stan Lee's "Peter almost becomes a Spider" story from Amazing.

Somewhat redeeming is the process of Peter's transformation. Superhero action almost becomes superhero horro, as you see the little details from Peter transform, and how the world around him reacts. The dog across the street, who never liked him to begin with, now barks at him even more than usual. A smart detail to convey Peter's transformation, almost like Jeff Goldblum's transformation in The Fly (1986), one of my favorite sci-fi movies. I will never forget the scene where his fingernails fall off. Yeesh.

All in all, a re-hash of earlier, better stories.

So, back in 2004, the Spider-teams revealed that Gwen Stacy had an affair with . . . her murderer, Norman Osborn, and bore two children out of it, Gabriel and Sarah.

The less said about it, the better. But they had to wring four issues out of the fallout, where Peter visits Sarah in her home, Paris, after she's taken to the hospital for a potential suicide/overdose. You know, the girl who's rapidly aged to her twenty-somethings (it's kind of like progeria?) and looks just like Gwen Stacy, the love of his life. In, you know, the city of love, Paris, away from his wife in Manhattan.

What could go wrong?

The story once again deals with infidelity, and is kind of a crime/mystery/family drama. It's just unfortunate they had this material to deal with, an ugly retcon of a dearly-loved character's history. There's no denying that Sarah's a bombshell like her mother, but it's way too weird knowing that we're expected to expect this amorous tension between him and Sarah. God no.

Paul Jenkins isn't a bad writer, and I don't think Sara Barnes is either, but these were way off the mark. A forgettable volume 4 followed up by a wish-you-could-forget volume 5. I'm willing to believe in Spider-Men that can shoot webs out of their hands. But not a guy who will go to Paris and go on dates with the girl young enough to be his daughter, but just so happens to look like his dearly-departed high school sweetheart. Yeesh.