The menacing premiere of: the lil lizzies!

A new week means new comics! And what a week it is, bringing the return of Gail Simone with the Birds of Prey. It seems like only yesterday that Zinda Blake, Lady Blackhawk was showing us how to call a cab, and today she's showing us how to shoot terrorist kidnappers in Greenland.

Birds of Prey #1
by Gail Simone and Ed Benes


Gail writes the birds as they were meant to be written: head-on in the 11th gear, kickin' ass and makin' jokes. It's the perfect mix of action and humor that keeps me on my seat, and dude, in the middle of the issue, Huntress takes out a goon and then throws him at his pals approaching on motorcycles. Hardcore:

Which isn't to say that BoP was just an adrenalfest. The core birds, Oracle, Canary and Huntress have to deal with a mystery dude who apparently has files on all superheroes: where Oracle's dad goes to walk every morning, the addresses of every student that Huntress has ever taught in school. They ruminate over this before they're attacked by "the White Canary."

And that's not even the half of it! Gail for sure is making her money's worth, introducing Hawk -recently brought back from the dead in Blackest Night- and Dove, hinting at some character conflict there. With how they're working off the past, and bringing in new characters, I couldn't be happier that I got this big 'ol issue number one. It reads like a dream.

Part number dos for "Shed," covering the return of the demon inside Curts Connors, THE LIZARD! It reads like every other return the Lizard's made, but with one exception: the stylish scribblings from Chris Bachalo. He is for sure an acquired taste; I disliked it at first, saying he made characters look way younger than they ought to, but it works, especially in the half-jokey, half-serious tone that overtakes Peter Parker and Spidey stories. Here, Bachalo blows the Lizard up as a giant bipedal croc with arms. I think he overdoes some panels of Lizzy's face, but check this out: 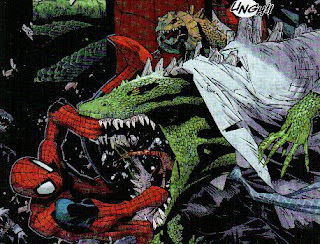 Yeah! That is one visceral, raw picture! I love it. I don't know if it was Zeb's idea, or Chris's, but they also introduce Lizzy's little iguana minions, "lil lizzies," who look totally menacing and adorable at the same time. Check it out, he's on top of the Lizard! Absolutely adorable. 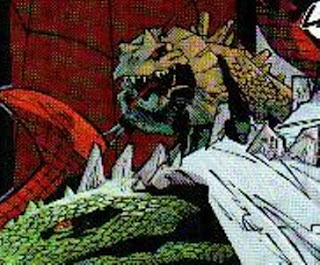 Anyways, near the end of the issue, I think the Lizard eats his son, Billy Connors, who's been a plot point and a vestige of the Lizard's humanity ever since. . . Stan's run on Spidey, uh, thirty years ago. It's pretty ambiguous, but they seem to imply it with a really vague two-page spread that zooms in on the Liard's scales, then on the debris flying in the street. I definitely find it hard to swallow, so we'll just have to wait and see. All in all, the issue as a whole felt rushed and read too quickly. It doesn't help that Emma Rios pencils in some scenes, making the issue feel disjointed, and that she'll be doing some of next ish too.

Not as strong an issue as part one, but I think the Lizard's teeth have hooked me on this story. Bachalo's art is worth it, so I'll be finishing the arc.
No comments:

Email ThisBlogThis!Share to TwitterShare to FacebookShare to Pinterest
tags: /cover to cover, Birds of Prey, spidey

A cow goes MOO, but what does a duck do?

Yep! Right on the nose!