Since y'all are probably tired of hearing about Ex Machina, I figured I'd mix it up and look at some other stuff. There are some books that deserve the "Absolute" treatment, as DC would put it, or the "Omnibus" treatment on Marvel's end. I myself have one fancy shmancy book in this style, and that's my Howard the Duck Omni, but I've put stuff up on the blog before, such as DC's Absolute Batman: The Long Halloween.

It really does deserve the Absolute treatment, but when it comes down to it, NO book deserves it more than Neil Gaiman's Sandman stuff. That's why we're gonna take a look at some moments in the edition, as we go all the way up to volume 4! Join me! 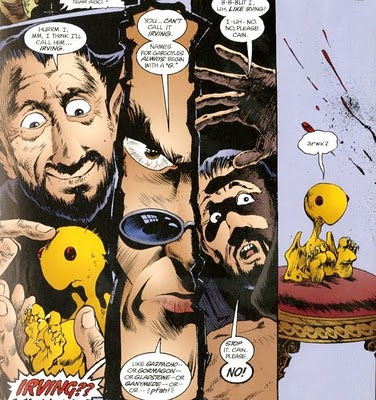 #2: This is the debut of probably the most adorable recurring character ever. Irving is later renamed Goldie in the issue and brought a lot of heartwarming moments to otherwise grim situations! 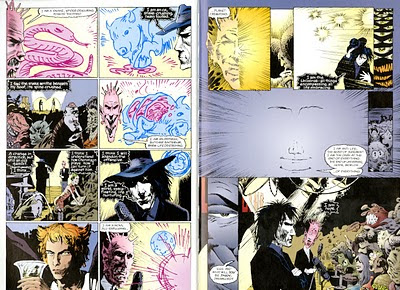 #4: In the Sandman's quest for his items of power, they bust out with a epic poetry slam OF HELL on you! The King of Dreams takes on a duke of Hell, Choronzon, in a battle of words in order to retake his helm. This would be only a hint of the imagination to come. 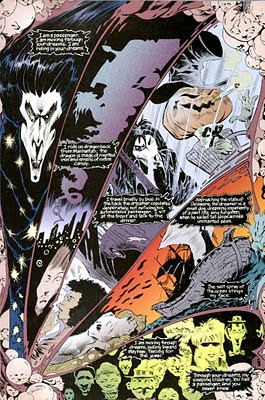 #5: Dr. Destiny breaks out of Arkham to claim the ruby that his dead mother passed on to him, from storage. Turns out, that ruby belongs to the Sandman! It was one of many items that the Sandman made to help him in his managing of the Realm of Dreams, and it has some of the Sandman's power in it. As Dr. Dee races to Mayhew storage with a hostage, Morpheus hops along by our dreams. We had a passenger and we never knew it. 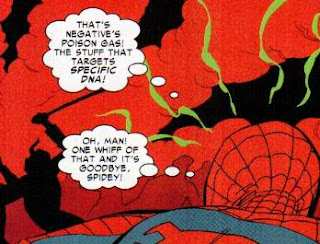 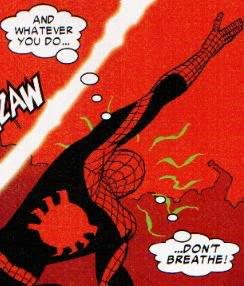 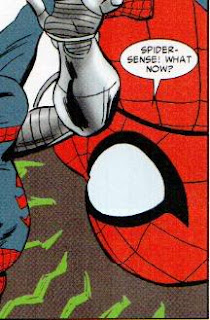 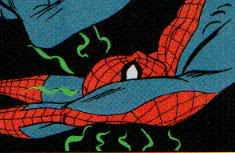 All from the same issue, can you believe it! Amazing Spidey #620.

Email ThisBlogThis!Share to TwitterShare to FacebookShare to Pinterest
tags: spidey

I've never done this before, but I'll be reviewing TWO trades today. Twice the action! Twice the drama! Twice the romance!

You can pay me in food.

WHAT THEY'RE ABOUT: BKV keeps on pumping out different arcs one by one! In the first one, Mayor Hundred must face the greatest challenge of his life -- jury duty, while a knock-off called "Automaton" tries to fill in the void he left when he was the Great Machine. Then, we explore his history as he meets his baby boomer mom. In the next volume, America declares war on Iraq, and Mayor Hundred has to deal with his own staff participating in protests! Thereafter, we explore a special flashback story to learn more about the Great Machine's archnemesis!

WHAT I LIKED: BKV plays with the stories and mixes fantasy and reality excellently. It's such a unique and candid take on the life of a mayor who happened to be a superhero some odd years ago. Wanna see a mayor give a speech on gay marriage to the public in one page, and then totally use his powers to trace a phone call the next? Then BAM, you're covered! 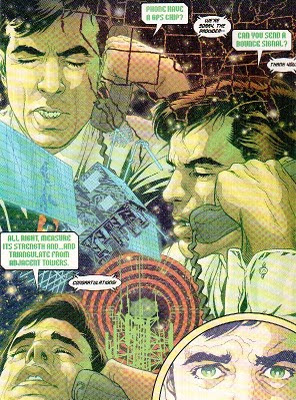 WHAT I DIDN'T LIKE: I think these two trades were really solid, but some people might think that it's cheesy that the Great Machine's archnemesis basically talks to animals. I think it's pretty inspired, because, when you're a superhero who relies on technology and machinery, the opposite of that would either be Poison Ivy, or a dude who can talk to animals! He even brings up animal rights too! 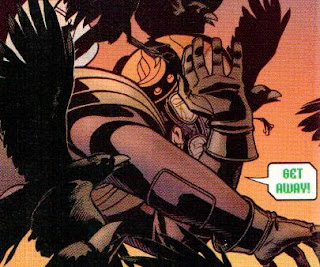 EXTRAS?: None, for either of them.

FINAL THOUGHTS: Ex Machina is a solid series grounded in reality, drawing off of national news and politics, but freshening things up with superheroics. If you're looking for a title that's fresher than spandex superheroes, it's right here.
No comments:

Love is in the air!

Happy Valentine's Day everybody!
No comments:

probably the most crotch references I've made in a single post

Hey don't you just hate it when a guy makes a blog and neglects it for a week? Boy, whattabum!

This is the end of the "Mysterioso" three-part-er, bringing back Mysterio and throwing in Mr. Negative and New York gang wars. Slott really plays up Mysterio here as a slapstick guy who really loves putting on a show until he takes it too far. In fact, he isn't really the threat this time around so much as Mr. Negative is. 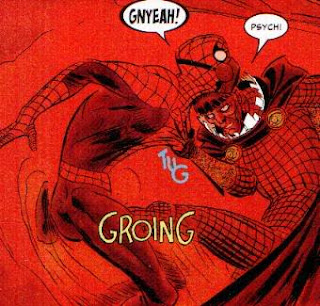 The art is as great as ever, with creative panelling and sound effects. This issue is heavy on the action, and the arc overall was a great way to bring back Mysterio. Between Mr. Negative performing highly invasive surfery on Hammerhead or a genius sequence of Peter taking a big gulp of air before Mr. Negative's Devil's Breath gas hits him, my favorite part is probably Spidey's crotch vibrating.

I'll give the issue TWO out of FIVE foam-finger freddies, but I think the three issues together deserve ONE. The middle issue was the best in terms of the affection for past stories, and the last ish dragged them down by getting a back-up artist.

A poor blogger's ploy to the FCBD winds

Do you know what year it is? Apparently, FCBD doesn't. Like, any other friendly neighborhood blogger, I go to FCBD's site and look for their new '10 banner, except all it has is their '09 banner!

This is pretty ridiculous guys. Even the link says "FCBD10_banner," yet the image promotes "May 2, 2009." That is just incompetent web design. Here is a copy of the vehement e-mail I sent: 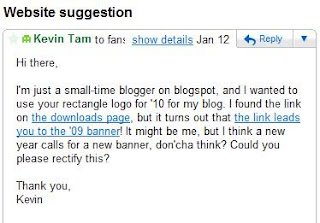 Are you catching this, FCBD? I AM CALLIN' YOU OUT. YOU BETTER OWN UP TO YOURSELVES, OR I WILL KEEP PESTERING YOU with. . . . strongly worded e-mails.
No comments:

sketches on the back of my physics homework:

Sometimes it's nice to remember that I am not made of money, and actually need food. This week is one of those times, as there are a few titles I could be getting, but choosing not to.
In lieu of actual material, please see these awful facsimiles of Tony Harris's art that I've tried to recreate. I apologize in advance. 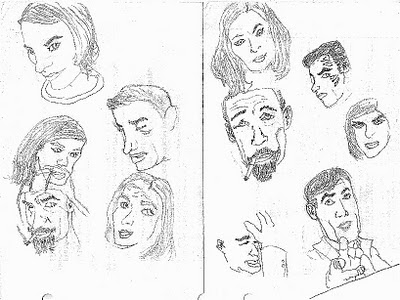 These were actually done in pencil, not pen. I just made the filter on my scanner way too sharp.
To be honest with you, I actually dig some of those. Particularly the ones on the top left and bottom left corner. It's fun to draw pretty girls and wild facial hair, although maybe not at the same time.
This is what happens when kids have too much time to themselves, people. You have been warned!
3 comments:

In hot anticipation of the convention season, ItsJustSomeRandomGuy of youtube fame has made a couple videos promoting C2E2, the new Chicago Comic and Entertainment Expo! Check 'em out:

To see more videos, check out his channel, but for now, I suggest you stick around for a while as we take a gander at

WHAT IT'S ABOUT: Gay marriage and alien graffiti start mucking up NYC Mayor Mitchell Hundred's office! See the first volume here. The second volume is named "Tag," because numerous tags show up in the city that bear a strong resemblance to the artifact that gave the Mayor his powers.

WHAT I LIKED: I love how the Mayor officiates gay marriage in the trade, since it's done in a humorous and personal yet serious and professional way. Top-notch, BKV. Now that he's established a real-world setting, he can run amuck with the kinda stuff that we read about in the newspaper.

I also love that another assassination attempt is taken on the Mayor, this time with an old-school bow and arrow. It's too much!

WHAT I DIDN'T LIKE: The trade ends up being a murder mystery that delves into a few characters of Mitch's past. I don't really like it, because it ends up being really contrived, and unbelievable, especially in the tone that BKV's established. I came on the trade really strong, but finished really weakly, I'm sorry to say. 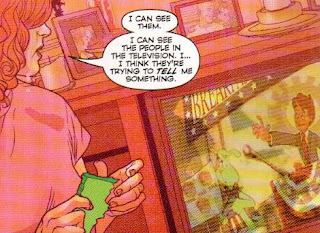 EXTRAS?: A few sketches from Tony Harris, and an introduction from the Wachowski Bros. Nothing really noteworthy.

FINAL THOUGHTS: I really wish the trade ended better, 'cause if it did, I'd be able to praise it. Solid dialogue, solid plotting, solid art. It's just that the murderer reveal mucks it all up, and makes everything else tougher to chew.

I'm giving it THREE Foam-Finger Freddies out of FIVE.