On Monday I talked about the Batman: The Black Glove hardcover. If you missed it, go ahead and check it out. Grant Morrison worked with Tony Daniel, Richard Clark and J.H. Williams III on pencils for the various stories, and I had an overall positive experience with it. Tony Daniel's managed to nail his very own title (the New 52's Detective Comics) in both word and pencil duties, and J.H. Williams III is tearing it up on Batwoman.

I want to talk a bit more about the latter's contribution to The Black Glove. Specifically, I have three specific two-page spreads of J.H. Williams III to show you today.

1. Batman and Robin fly to the island of Mister Mayhew 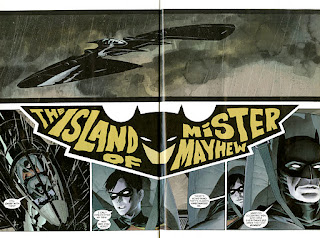 These are the 2nd and 3rd pages to his first issue, #667, and it's a great establishing shot. A fun design that pumps you up for an awesome story!


2. The Legionary is murdered on Mr. Mayhew's island 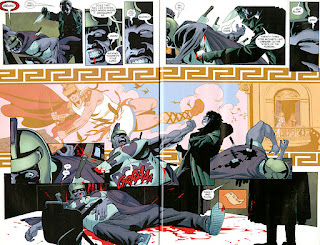 I think this was still in issue 667. One of the members of the Club of International Heroes, gets stabbed to death by the mystery murderer. The gold, grecian frame runs from the left of one page to the right of the second, telling you to read all of the top row before you move on. When you do move on, you see that intense panel of his eye flaring up, and a final lash out at his attacker! The painting of a virile soldier behind him evokes his glory days, his life as a hero, before he finally collapses to the floor in a pool of his own blood. It's a gruesome sequence, but it was told beautifully. Comic books are a synthesis of pictures and words, and these pictures tell a thousand words.

3. Robin and Squire escape a death trap, while Batman watches? 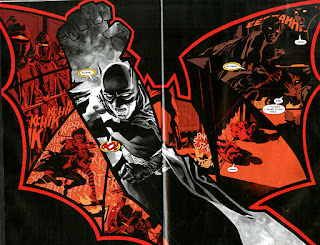 Some pictures can do a better job than words but, in this case, I think it's crippled the story. When your eyes take a first scan of it, it looks incredible -- it's a fuckin' bat with a fist tearing up through it! -- but I had a difficult time reading through it. The claustrophobic panels make it hard to see what's happening, when the set seems to be an important part of the sequence. The knight statues are shooting at Robin and Squire, by the way, who duck under something to escape. When the gray panel goes through, is Batman there? Is he telling Robin to "GO!"? Where is he in the set? This probably sold lightning fast, as original art, but I think it detracted from the storytelling.

Anyways, those are my opinions on some specific pages. J.H. Williams  is really doing some exciting stuff with comic books, and the industry is all the better for his work. If you have any opinions or have been loving his work on Batwoman, let me know.