Trades for today: Battle for the Cowl, Young Justice and Atomic Robo

Anybody interested in Tony Daniel's current run might enjoy his work on the old-52 Batman-verse. He had quite a run with the Grant Morrison before Bruce Wayne's death in Final Crisis. Then he got this three-issue miniseries to tell about the crime war in Gotham that fell out of Batman's death, and Gotham City's need for a new Batman.

Nightwing and "The Network," a ragtag crew of Oracle and others assembled to quell the mob wars in Gotham, try to discover the identity of a man who's taken on the Bat-mantle, a man who's much more cruel and violent than Bruce. In the final issue, Nightwing realizes that he's the best non-crazy person to don the cape and cowl, and that leads into a year or so of Dick-Grayson-as-Batman stories. There are explosions. There are punches to the face. There are many, many cameos from random people. It's a lot of sound and fury, and I'm sure there's a story somewhere in all those explosions, but I'd rather not take the time to look at it again. It doesn't challenge the reader, and it doesn't need to in order to be successful.

DC's teen superheroes get into some hijinx together in this charming trade paperback. The first few issues establish Impulse as the "id," acting on his first thoughts, with Superboy as the "ego," having a rigid sense of morality and Robin as the "superego." They meet the busy supervillainess, "Mighty Endowed," and find a sentient 4th World super car as a pet. Later, they team up with the girls Wonder Girl, Arrowette and Secret in order to break up a prison for teenage super-people.

It's a fun, energetic story that sucked me in from issue one. The writers have a delightful use of puns and double entendres. 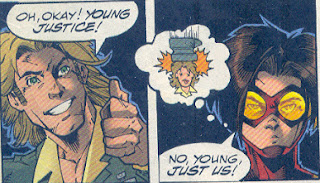 Robo returns in this fourth volume with his unique brand of dry humor and action science! There is no overall storyarc to this volume, telling instead four different one-shots, dealing with science power rangers in Japan, an attack from the Vampire Dimension, the ghost of Thomas Edison, and my favorite, the deadly debut of Dr. Dinosaur. 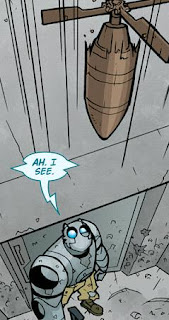 The price of $2.99 for the fourth volume is hot hot sexy, and fans of Robo would enjoy this. Non-fans can consult volumes 1 and 3 to cure their affliction.