Cover to Cover: Superman/Batman #'s 44-49, "The Search for Kryptonite"


Superman/Batman #44-49
"The Search for Kryptonite"
by Michael Green, Mike Johnson and Shane Davis

Sometimes I'll read through a trade paperback and, in my reading, I realize that the creative team put so much effort as to make each issue its own self-contained story, while contributing to the overall story. I'll stop in the middle and I'll say, "Dang. I should've picked this up in serials."

"The Search for Kryptonite" is one of those stories. After getting buffeted by Kryptonite shards from a movie set, Superman realizes that it's way too easy to get ahold of Kryptonite on Earth. He asks Batman to help him scour the globe for the ore, and Batman agrees! 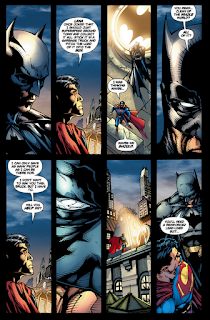 It turns out there's a lot more Kryptonite on Earth than they expected, and they find a HUGE fragment in the sea, lorded over by a young Aquaman. He argues that the sea is no one's spoils and that he's tired of the surface world doing what they please with it. It really gets to the politics of Superman: What gives him the right to remove his one weakness on Earth? What gives him the right to plunder the entire planet of one resource? 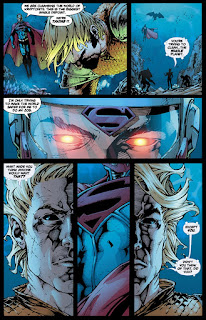 The next issue (46) features silver Kryptonite, found in a bar for magicians, which has. . . strange effects on Superman. 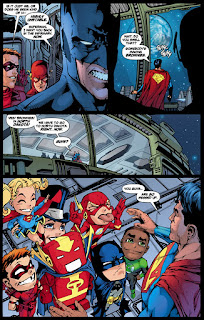 It's also a meditation on science vs. magic, skepticism vs. illogic, represented by Batman's dialogues with Zatanna. The two end up going to a remote island in order to retrieve the silver K's counterpart and bring Superman back to reality. The natives there tell them that a human must retrieve it and so we have shirtless Batman entering the mouth of a volcano to get a rock for his friend. 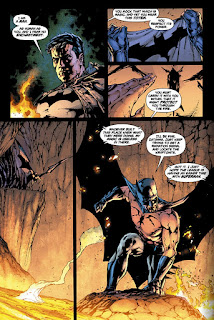 The search continues when they find that Lexcorp itself is pioneering Kryptonite-powered technology. Superman and Batman investigate a research facility in Kansas that's harvesting the ore, and are attacked by a government-sanctioned strike team designed specifically to take down Superman. 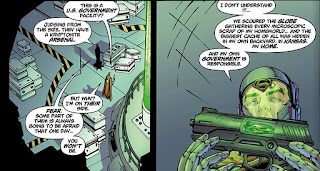 It explores the nature between the American government and its Superman, an altogether realistic take that I haven't found anywhere else in the DC canon. The writing is very thoughtful and makes up for the whelming art from Davis. This issue shows a brilliant panel from Superman though:

The fifth issue (48) introduces a Kryptonite-powered Doomsday. You heard me, a Kryptonite-powered Doomsday. Superman and he brawl it out in Kansas, but it's not just a fight-fest. The writing takes you into Superman's head, the memories of his childhood in Smallville. There's some incredible narration about names -- the memories we have of our names, and the feelings attached to them. We find out that the Doomsday was an American boy who wanted to serve his country, and Batman brings an end to the fight: 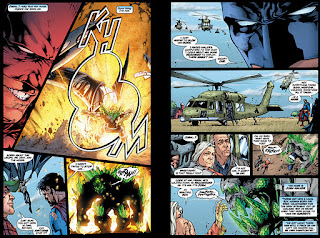 The way the Doomsday struggles to say "Mom" and "Dad" is heartbreaking. The end of the issue depicts one last page on names. It's brilliant. The writing manages to capture the parallel thought processes between Superman and Batman, that Loeb established in the first arcs, but it surpasses any story that Loeb has written. 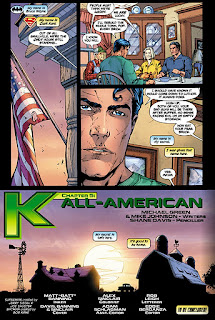 The final issue has Superman confront the C.E.O. of Lexcorp, Lana Lang, his childhood friend. It depicts her moral dilemma in handing over her mining locations to Superman -- because if she does, millions will be out of a job. She refuses Superman and vaporizes all Kryptonite on Earth, creating an atmosphere that makes the planet uninhabitable for all Super-people and dogs! 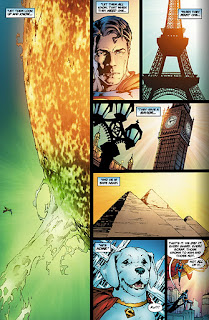 The issue is taken care of by the Toyman, and Superman ends up throwing the rest of the Kryptonite into the Sun -- except for one piece, which Superman entrusts to Batman. This makes for a brilliant ending: 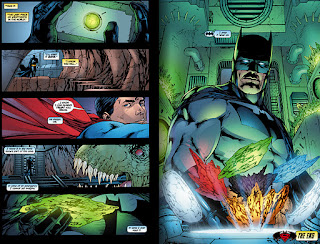 Batman has his own depository of Kryptonite, as well as every single color of K there's ever been! In the six issues, Superman's been betrayed by his government, his childhood friend and even other superheroes. For all the betrayal, he still places his faith in the world and in his friend. Unfortunately, Batman fails to return the same faith -- because he can't! If anything should go wrong with Superman, someone has to be ready, and of course it'd be Batman. It's a tragic reality that he has to face in this superhero world. I found the arc to be overall brilliant, and it comes highly recommended -- no other story legitimizes the Superman/Batman title better than this.

Tune in next Friday for our last look at the title.