The blurb goes, "There is no government, no mail delivery,
no cable TV. . . In a world ruled by the dead, we are forced to finally begin living," and it's 100% right. When Rick Grimes wakes up from a coma, he doesn't reach for his cell phone. He seeks a nurse, and he seeks his family. When he finds his family in a camp of survivors, the drama comes from their relationships: Rick argues with his friend on whether or not to move the camp closer to the city, and his wife finds unease in teaching their 2nd-grade son how to use a gun.

The Walking Dead is a human drama that happens to have zombies, and it is a survival soap opera. It pairs up peoples' instincts to live against the death of the world that surrounds them. It tries to assert life over death -- and it fails. No boy should have to shoot his daddy's friend because they were arguing. No group should have to leave a member in the woods because he got bitten by an undead.

If you like that kind of drama, you'll love Walking Dead. If you don't, you should still like it because it's flat-out well-written. I'm really curious as to how the series reads in single issues vs. trade paperbacks vs. compendiums. There's also that TV show on AMC which provides a whole-new experience!

If you're in the market for this, I recommend the compendium, collecting 48 issues for $35 on Amazon. That's less than a dollar an issue! Outstanding.

Hey here's a creative team you don't see very often! Cooke pinpoints a very specific spot in Superman's super-career, after his origin but before he learns all his powers. This gives us a rare glimpse into a vulnerable, frightened Superman. In here Supes saves a village from a volcano without knowing his invulnerability to its lava. Trapped in the thing, he loses his breath and ingests a bunch of lava. 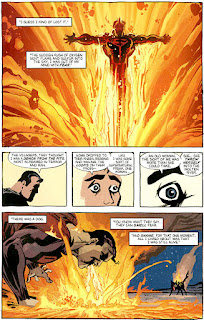 At the same time we have this giant Kryptonite fragment -- narrating its life and journey to Superman, because there's some weird Kryptonite dude living there. That's fine with me. This is a comic after all! But, for all its attempts to excite the mythos, I wasn't particularly impressed. Highlights include Superman creating "Clarkbots" to deal with his secret identity, and Superman's pet polar bear. You could do worse than Superman: Kryptonite, but you could also do better.

Oh snap! It's a third trade (kind of). ComiXology had a sale
on Marvels Project and I bit the 8 bucks for the 8 issues. The eight issues. . . they're like eight pieces of eight different puzzles. They tie in a bunch of characters, Nick Fury, Red Hargrove, Abraham Erskine and other German researches, a New York Superhero along with other 40s-era superheroes, all at the cost of the story.

It doesn't really have any focus but, I think we can consider issues 4-8 an "Invaders origins" story that explains how the Invaders came to be. I think Brubaker was tasked with something like, "Hey man, put all these Timely characters together!" and Brubaker did. He just didn't really give them a tight storyline to follow.

Issue 7 is positively, without a doubt, unequivocally, my favorite.

It depicts the sheer joy of kicking a Nazi in the face. 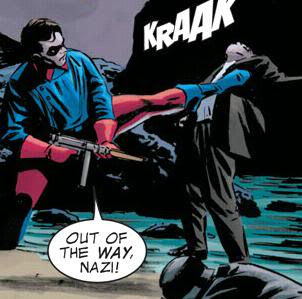 "Out of the way Nazi!" Immortal words from Bucky Barnes!