Hiya guys I hope your weekend was swell. Did you find any nice Black Friday deals? I online shopped mostly for friends and family, but I didn't care for any deals. Today I have Hellboy volume 1 for you as well as a video on digital comics.

One of the opening dedications is to Jack Kirby, and you can really tell. A lot of the muscles are drawn with that Kirby-esque flair, and there are Kirby dots in the usual places. The idea behind the comic book is that Hellboy is one part of a group of paranormal researchers in the BPRD (Bureau for Paranormal Research and Defense). The main story revolves around a haunted house and a former Nazi scientist who seeks to open the gates of Hell and summon a demon.

Of course, they stop him, but there seems to be an unnecessarily think amount of backstory that gets in the way. As I was reading it on my device, it became more of a chore having to get through each panel than fun. It seemed to be about Rasputin the Nazi occult dude as much as it was about Hellboy, and I think that was a mistake -- Rasputin talks for an amount of panel time that doesn't really contribute to the plot. What I want to see more of is this gritty, tough-as-nails Hellboy. 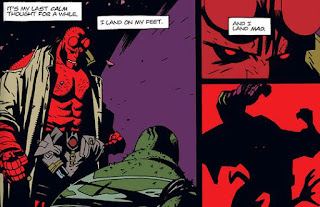 Included with the trade are two short stories and some pin-ups: I think the short stories convey Mignola's vision much better than the main story, which gets bogged down in details and names and odd terms. Hellboy is a demon who faces down weird, supernatural stuff. He solves his problems by punching them. 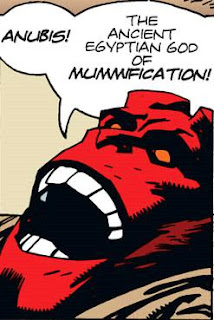 I usually get my Monday trades from the library, and no local library is complete without a Hellboy trade, but I actually bought this one from comiXology, which sells it at a phenomenal $2.99. It seems to be the only volume available there, as Dark Horse have moved everything to its own app?

You can also find the first issue for free, if you want just a nibble.

Usually I'll have two trades up for you, but not today. Today I have a video on the comiXology app for my device, the Kindle Fire!

The times, they are a-changin'.
If you too have been reading digital, let us know! What do you think?