Batwoman: Elegy collects Batwoman's starting takeover of Detective Comics, from #'s 854-860. And it's only kind of a hoot. Greg Rucka carries over Batwoman's story from DC's year-long 52 epic. If you didn't catch it, I highly recommend it, but here's Batwoman's part: the crime cult in Gotham attempts to fulfill a prophecy in the Crime Bible by murdering Batwoman. They fail, and their leader dies, and a new lady takes over in Elegy. What follows is Batwoman's struggle with this new leader, who speaks only in Lewis Carroll quotes and is ridiculously cryptic. It was really hard for me to take Batwoman as a main character until the last few issues, which detail her life as a military brat, following her parents wherever they're stationed. On the art side, J.H. Williams is freakin' brilliant you guys. The layouts alone are worth a look and distinguish Batwoman from her caped comrades. The latter issues somewhat redeem the main story, but the main story is mediocre at best.

Usagi Yojimbo Book 1: The Ronin collects ten stories of Usagi Yojimbo, the masterless rabbit samurai! And it is certainly a hoot. Usagi wanders across Japan amidst political intrigue, treacherous bandits with a code to help the people he runs into. My two favorites are "Horse Thief," where Usagi chases off a bandit raid, finding a free horse left behind. When he goes into a village, the magistrate claims that Usagi was one of the bandits who stole his horse, so Usagi takes off, giving the horse to a poor farmer who needs to tow his crops. As it turns out, the magistrate stole the horse from the farmer to begin with! making a satisfying karmic loop. Another of my favorites is "Blind Swords-Pig," in which Usagi meets an talented swords-pig who senses his opponents through smell. Short-form stories need to rely on lots of color in supporting characters, and Stan Sakai has that in spades. Looking forward to vol. 2.

American Vampire contains the first five issues of the Vertigo series, from Scott Snyder, Rafael Albuquerque and Stephen King. The stories detail the rise of both the American film industry and the American vampire in 1920s Los Angeles. These vampires are different from the burn-in-the-sun, Bram Stoker vampires, and they're hungrier too. Rafa draws the heck out of every page, and he's an excellent storyteller. Check it out for Rafael Albuquerque alone. I just one gripe: the collection is issue-by-issue, and the singles came out with a main story and a side story. They really should've chunked the main story together, followed by the side story. If I wanted to read it like the singles, I would've bought them as singles!
The first collected edition of

Today's post is reblogged from our sister site, airhikec001.livejournal.com. This has been post-dated to coincide with the post date of the original, which was August 16th, 2011. - Kevin, January 31st, 2012

So yeah. You can probably say I was a little hyped up about Captain America: The First Avenger.
No comments:

I've been binge-reading ever since I got my library dues out of the way, and chezkevin's got a whole new menu! We've got three trade paperbacks for you today! Read 'em and weep! 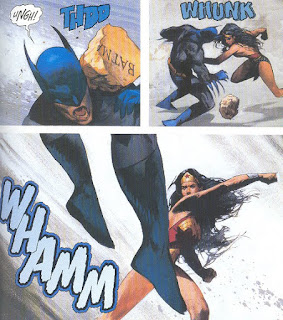 I found this gem from 2002 nestled away in the comics section of my local library. The entire thing is written, drawn, colored by Christopher Moeller. It's more a Wonder Woman story than a JLA one, as she visits the Oracle of Delphi, who foretells that the JLA will fight the last dragon on Earth, Drakul Karfang Serpentis Voldemortem, and will perish in order to defeat it. What follows is Wonder Woman taking down the entire JLA so that she can be a "league of one," and sacrifice herself against Drakul Karfang Ekans Kobra. It's lushly painted, paced well enough and certainly a Wonder Woman story with flair. The story is passable, but the style is irresistible. She even turns into a mermaid!

Remember that time Orson Scott Card decided to do a Marvel comic? This one is his first volume of
Ultimate Iron Man, and it's crummy with extra crum sauce. It's literally the origin of Ultimate Tony Stark, from the day he was born to the day those mean dudes in boarding school stuck him in a furnace to burn. The problem with the five issues is that they're not focused. Why devote an issue to Zebediah Stane's douchey-ness, to bring it up 2 issues later? Why send Tony to boarding school when he'll be in nerd school in 10 pages? The details are too scattered, especially when you only have 5 issues - 110 pages to tell them. The ending isn't even a real ending, somehow leading into Ultimate Iron Man 2: Electric Boogaloo. I love the Ultimates -- I have their first two hardcovers -- but I really find it hard to accept this as part of it.

Ultimate Spider-Man: Clone Saga collects Brian Bendis and Mark Bagley's issues 97-105 of Ultimate Spider-Man. The two redo the much-maligned Clone Saga from the 616 universe, which spanned over 4 titles and 3 years. I've never read that one, but this one is a blast. Ultimate Peter Parker is witness to a spawn of clones, like the Scorpion clone, the Tarantula clone, as Nick Fury tries to contain the situation in a militarization of Midtown. The whole nine issues play out like a tight action thriller, increasing in plot twists and cliffhangers. Oh snap, is that Gwen? Oh snap, that dude's a clone! Oh snap, that clone's really ugly! Oh snap, is that Ben Parker! I thought he was dead! Oh snap here comes Nick Fury with his Spider Slayers! To be a spider-fan and watch as Peter's life unravels before him is amazing. If ever you've read Ultimate Spider-Man, don't miss this one.