It looks like we're going to skip June and get right into July's comics. It's been a rough time for me, and I'm going to be moving soon, so you're going to have to settle for this.

Besides the comics in this list, I also got Batman #11 and The Flash #11. I didn't find the panels too remarkable in either, so I've omitted them. 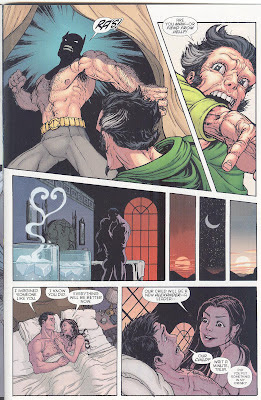 Dig that second panel! He is literally seeing bats. That last panel delivers a good joke in the otherwise serious issue. It's something of a biography of Talia al Ghul, and it made me interested enough to get a copy of Batman: Birth of the Demon. This was just in time for The Dark Knight Rises, which was fairly al Ghul-centric.

This issue came out in June, but the July issue was delayed for August, and this page was good enough that I thought I'd show you it. 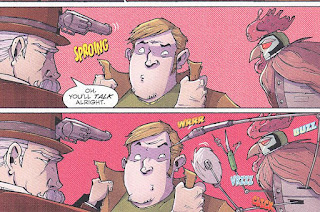 Chew also skips the month of July for a Poyo one-shot. And it's worth it! Poyo escapes the clutches of Satan, in Hell by straight up taking them down. And that's just the prologue. Women want to be with him, men want to be him. Poyo.

The Goon engages in a hot rod race with a family for the right to deliver booze in a prohibition-era town. Powell delivers some great vintage humor in this edition.

As soon as I saw the preview I knew I wanted to pick this up. I love the confidence in Murphy's lines. It's really great to look at.

This panel takes a rib at corporate America, trying to engineer a "designer baby" in the way of Jesus' clone. 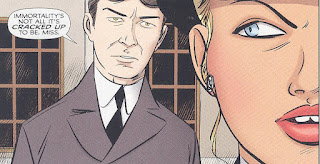 If most comics took on the pace of this one, most comics would be far too slow. But, I think I get what they're doing here. It's a whodunnit that reveals information slowly over time. I'm pretty sure this story could be told in six, but I'm not a comic book writer =/.

In this panel, Inspector Suttle speaks with the murder victim's daughter, who's a "throat suffragist," a woman who argues for the rights for unmarried women to also receive "the cure," ie, becoming a vampire. It adds another wrinkle to the world of infested Victorian England.