This is an excellent story that happens to use DC's greatest characters.  It's an Elsewords tale that tells about what might happen, if Superman landed in Soviet Russia as a child, instead of in Kansas. The "farm-boy" mentality remains, and being a communist doesn't turn Superman heartless as older depictions would have you believe. In the first issue, he even saves Metropolis from a plummeting Sputnik (engineered by American genius Lex Luthor to malfunction). Superman is an American idea, but Mark Millar manages to capture the idea of Superman and distill the America out of it. 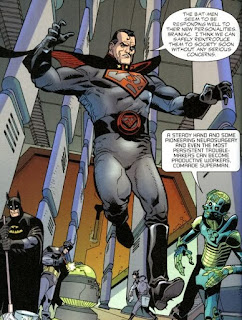 When Stalin dies, the people urge Superman to take over, and so he becomes President Superman. By the second issue, he's having to deal with the terrorist Batman, and his ally Wonder Woman, all while building his socialist utopia. The change over time of Superman's character comes off as organic and inevitable -- President Superman naturally swings the entire world to socialism -- except for America. It raises some interesting questions about Superman in the real world -- of course he would have the key to creating the best society. Does he have the right to impose that society on the world? 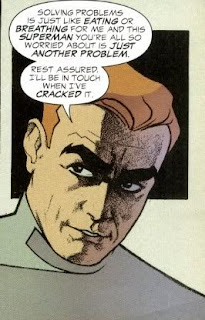 The plotting is so tight, and the pace of the comic book moves so well. Not only is this the history of a Socialist Superman, it's a history of the clash of politics, and the endeavor of the human spirit. After building up so many allies, such as America's Green Lantern (from a ring found in Area 51), or Superman's conversion of the megalomaniac Brainac, there's a dramatic confrontation at the White House, and Mr. President Luthor deposes Comrade Superman. It's an amazing moment when Superman realizes that Lex planned for his death years ago -- and then accepts it. One more thing about the ending: 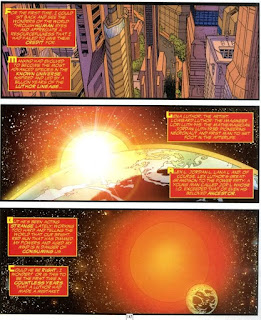 Did you read the scan? Without a Superman to interfere with his life, Lex Luthor improves the world, extending the life expectancy and eradicating all human diseases. He leaves a legacy that lives as long as the Sun -- long enough for it to turn red. In the next pages,"Jor-L" rockets his son "Kal-L" to eventually land on a cornfield in Kansas! It's amazing to think that this universe is the same universe that created our universe's Superman. This is one of the strengths of Superman and DC's characters -- they're so malleable that they can have their own universes and their own stories, but if you want them to, they can interact with the original universes. Well done, Mark Millar.

Red Son is an excellent story that revels in a twist on DC's greatest heroes. Highly recommended.

The Unknown: The Devil Made Flesh
by Mark Waid and Minck Oosterveer
collecting the 4-issue miniseries
(free on comixology, when I got it. They charge you now)

Catherine Allingham is at it again, and this time she takes her wits to a supposed haunted cemetery in Rome with a new partner! She finds out that, due to the incoming noise from the newly-built airport, the air is vibrating at the resonant frequency with the human eyeball, and that's why everyone is reporting hallucinations! And that's just the first issue.

That's what I love about The Unknown. There's this adamance that everything can be explained through reason and logic. Catherine represents this logical force that desires for knowledge: to know the unknown, and she's drawn to the weirdest cases. The newest, weirdest case comes from the quiet town of Mountain Oak, host to a string of bizarre murders in which the victims write out a message in their own blood, moments after death.

That's the second mystery in this volume. The first is why Catherine Allingham is still alive, a year after her brain tumor would have destroyed her. Both get solved by the end of volume, and I found it very clever the way they handled Catherine's brain tumor. She shuns medical science, because they don't guarantee that her mind will be 100% intact, so she embraces her six months to live, in the prime of her mental acumen. But, because she touched the door to the afterlife in the first volume, she's immortal! And the brain tumor will continue to grow and destroy her mind. That shit is tragic, guys. By the end of the volume, we solve the case of Mountain Oak, and there's a great hook that calls back to the first volume. Catherine Allingham continues to be a compelling character in comics, and I would love a third outing. 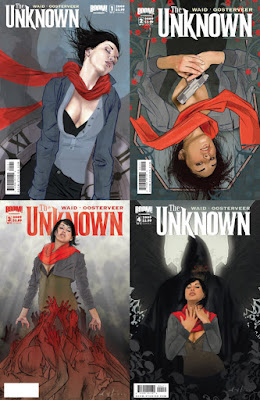 Extra props go to Erik Jones, who did the covers for the series. Instead of featuring the trade cover, I've put the four covers of his together, above. Those are beautiful, the way they move and emphasize the character.

NEXT WEEK: The Flash of Two Worlds and Y: The Last Man Vol. 5: Ring of Truth!