January's come and gone, so I've put together a list of my favorite moments from this month's comic books. Which ones were your favorite? 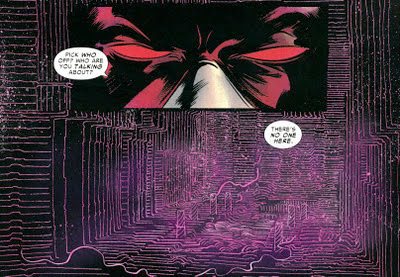 When I reviewed this issue, I didn't have much opportunity in my rant to talk about the radarsense, so I thought I'd bring it up here. Radarsense is a non-visual idea, so I think it's a great opportunity for the artists to be creative and do some new stuff. So far, we've seen Paolo Rivera's radarsense, Marcos Martin's, and now here's Emma Rios's. It looks generally the same as Paolo Rivera's.

Look at the way Black Cat's legs are wrapped around hornhead. The sexual tension is crazy. I love Kano's depiction of the feet here, for Daredevil. 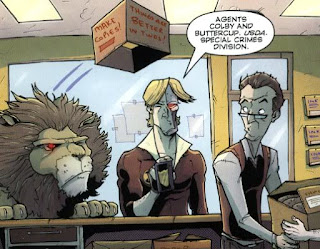 In the Chew-niverse, all USDA agents have an animal back-up, and Buttercup happens to be Colby's partner. Check out his paws on the counter, it's a wonderful detail. 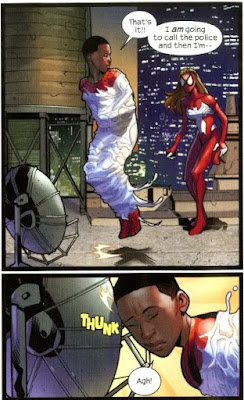 Poor Miles! Just wait until he gets his own webshooters, then he can make Gobby or Dock Ock hobble to their doom. 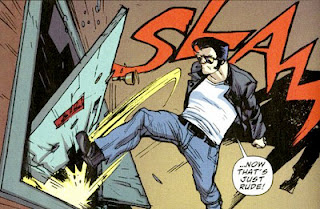 This may have been the one instance of a hand-drawn sound-effect. It's a bit sloppy, and the perspective is really wild. The panel doesn't seem as polished as the rest of the issue, but it stood out to me.


The Flash #5
by Francis Manapul and Brian Buccellato 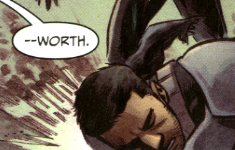 Just a little sound-effect on the very first page of the issue. Again, I love it when they're hand-drawn, and I think this was the only one in the issue. In fact, it's all the way tucked in the left-hand bottom corner of the page, so I wonder if anyone would even notice it. I love these small details: it shows that the creators really care about the craft. 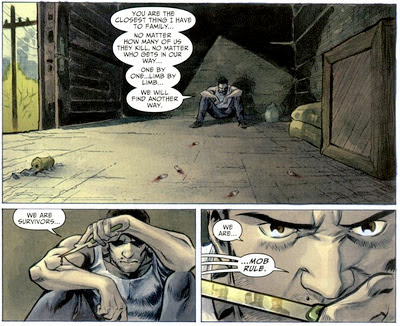 Holy crap, do you guys see this? This sequence captures the drama and turmoil in Manuel's head. Look at that first panel, look at all those fingers there. Manny grows clones from every severed appendage. The clones expire after a while, so he kidnapped Dr. Elias to fix the genetic flaw in them -- the Flash interfered with the experiment and he lost every single one of his clones. Every finger on the floor in that panel is a symbol of his frustration and anger with the Flash.

Look at that last panel! You can see it in his eyes, and in the reflection in his knife. Manny's going to tear up the Flash next time he sees him. This is some excellent drama.

This is an excellent way to frame the shot. You don't need to see Steve Rogers' hair -- just the stern look on his face, and the gun in yours. Steve Rogers wants information and he wants it now. 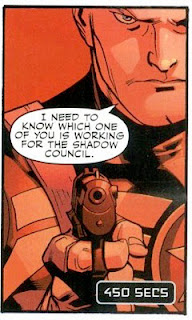