During the holiday season last year, ComiXology had a sale on several Avengers/X-Men titles. I purchased the whole run of Joss Whedon and John Cassady's Astonishing X-Men, some Chris Bachalo/Zeb Wells stuff on Amazing Spider-Man, and this one issue of Amazing Spider-Man, #577, that featured a team-up between the Punisher and Spider-Man. 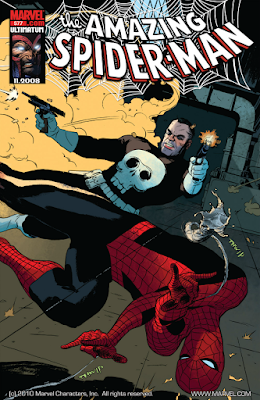 In this case, that force of evil is Moses Magnum, a South African mutant who's selling Mutant Growth Hormone laced with Gamma, on the black market. The Punisher gets involved because he hates crime, and Spidey gets involved to kind of police him! That is, he tags along to make sure Frank doesn't kill anybody. This single issue is very strong, not because of the plot, but because the plot allows us to do a character study on both Frank Castle and Peter Parker.

Even though they're both Marvel protagonists, they serve as foils to each other. Frank represents this force of destruction, and Peter is the attempt to hold back that force. You get a clear sense of who they are and what they want from life. Paolo draws this intensity on Frank in every panel: his brow is always furrowed, and you can really feel the hate in this guy! 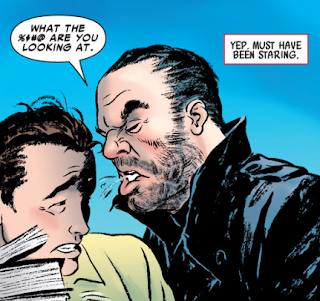 Check that shit out. The dude literally spits in Peter Parker's face for looking at him wrong. Look at his brow too. It's constantly touching his nose, that's how low it gets. 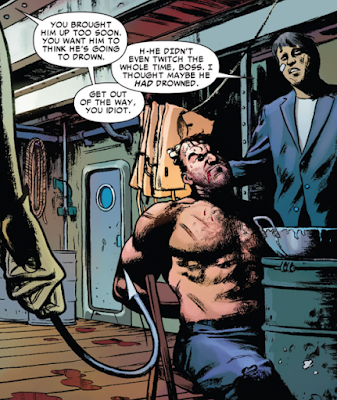 Here's another panel about Frank. He takes whatever Moses dishes out, and he does it with a scowl. This guy does not give in. Also, dig that chest hair.

So Paolo Rivera and Zeb Wells get Frank Castle. That much is clear. Here's some great Spider-Man stuff of Rivera's: 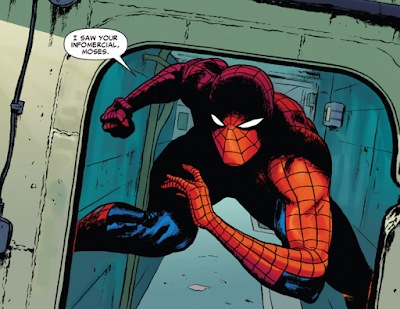 Paolo Rivera gets it! Spidey's visual dynamics are HUGE. He can swing. He can crawl. He can jump. Dig the shadows too, good pencilwork in there. 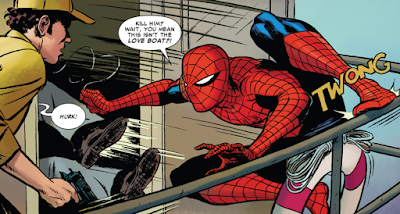 Which is to say, Zeb Wells is no slouch either! He has this knack for telling timeless stories -- that is, he doesn't seek to shake up the status quo, and tells stories that are good for today, as well as four years from now. His work on Spectacular Spider-Man, with Paul Jenkins is a good example if you're looking for more.

If you're looking for a plot summary, I don't apologize for providing one. When super heroes team up, the conclusion is foregone, so the strength of the story lies in the characters, and these guys nailed it. It's no wonder that Zeb's doing Avenging now, and I'd love to see Rivera do some more Spidey. One of my favorite recent-ish issues of Amazing Spider-Man.