Serials for 2-15: Ultimate Comics Spider-Man, Thief of Thieves and more

Today I'm picking up Peter Panzerfaust and Daredevil #9. Since I'm going to chew on them for a while, here are the serials for today:

Check that cover! There are some images that just grab you and never let go. When I saw this cover, I knew I had to find out more, and when I read the preview, I knew I wanted to check out the whole issue. It's these incremental steps of curiosity that really paid off for me, and they might pay off for you too.

I love the way the pages are set up. The panels are nearly all wide-view panels, and the colors and pencils cIontribute to this slick, noir-ish tone of the heist comic. Each page is its own self-contained moment, or slice of the story, and I honestly feel that each page could be serialized, like in a Dick Tracy newspaper strip. It's very interesting to read -- they tell a surprising amount of story in the 4 panels per page set-up, and it works for them.

A few complaints: There are obvious moments where Martinbrough takes some shortcuts, ie, reusing the same panel three times in a row, or drawing squiggly lines for people in the background. Comic books are visual, and comic book panels let us relive each panel of background and detail, clear as day. Own it. Take advantage of it.

My favorite parts: The carjacking scene is brilliant. We learn the necessary characters, and we get some handy facts about stealing cars. There's an average cliffhanger on the 20th page, but the 21st treats us to this letter from Robert Kirkman. It's about his hopes for comic books, and his determination that someday, comic books will be a staple of entertainment as much as television sets are. It's a wonderful, optimistic goal for comic books. I would have scans for you, but I've lent my copy to a friend. Scans will be up by the time of my monthly "best of" lists.

Books like Thief of Thieves expand the medium into new areas, and if it isn't the future of the industry, it ought to be.

It's the earths-shaking debut of Chris Samnee! I don't know about you guys, but I was pretty hyped up for this change in pencillers. It's insane how much this guy packs in a page, as well as its respective panels. His storytelling and emotions are just as strong as Pichelli's, with a completely different style. The cartoon-ish tone works for the most part, especially for the dynamic motions that Miles makes as Spider-Man, in apprehending a group of robbers. It falters a litle in the noir-ish scenes of Uncle Aaron, who's making a trip to Mexico City for his payment after robbing from Oscorp.

Looking back at it, I'm a bit surprised that that it took so many pages to show this sequence of information: "Uncle Aaron shows up in Mexico City, gets threatened by the Scorpion to eventually get his payment, then gets arrested." The pages seem to be more about the immediate feel, the nuances in the way someone walks, than about telling a longer story. It reads like the first ten minutes of a half-hour TV show.

If you noticed, a scan from the issue is the current banner on this blog. Here's another scan that I particularly enjoyed, of Miles throwing his unique brand of justice at the world:

Oh Miles. You've got a long way to go.

The Goon #37
by Eric Powell

Count on the Goon to juggle so many things -- tragedy, supernatural voodoo, union politics and taco stands -- and make it work. The issue centers on the Pentagram girdle factory in the city, and the horrible conditions for its workers. Some pages are devoted to why a fire arises there -- and each page is necessary to show how horrible this factory and its manager are, how terrible the workers have it there and how inevitable the fire is. No page is wasted.

In the aftermath the survivors resolve to form a ladies tailor union and ask for the Goon's help, who's more than willing. The manager goes to Mr. Corpus, who asks for "three drops of blood and a stool sample. Semen will work too." He goes on to make a "de-monic go-rilla" to break up the riots formed from the union, and the Goon goes to town on him! Only The Goon goes from tragedy to occult action from page to page.

The very last page is a killer, literally and figuratively that evokes the justice of EC Comics. Powell provides a letter to the readers at the end, explaining the historical background behind the issue, and I actually learned something from this comic book about union history and politics. Count on The Goon to add all these things: unions, supernatural priests, girdle fires, and de-monic go-rillas, and learn you something good too. 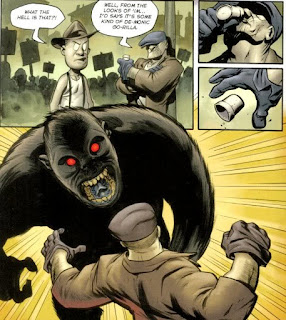