There was a war -- and evil won! Darkseid struck Batman with the Omega Effect, hurtling him through the beginning of space and time! Now it's up to Bruce Wayne to fight his way back home! 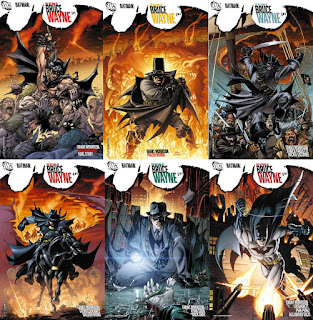 Batman: The Return of Bruce Wayne #1
by Grant Morrison and Chris Sprouse

Of these six issues, the first is the strongest. It's an oversized issue that throws Bruce Wayne in a neanderthalic era. Due to the Omega Effect, his memory isn't completely with him, and when he tries communicating, the words come out as jumbled to the tribe he meets. The tribe holds a man called "man" whose son is called "boy:" here, everyone is boiled down to their essential identities, a reference to Bruce's need to find his own.

When the neighboring tribe attacks this tribe, Man gets killed, and Bruce Wayne is kidnapped, to be eaten for the next day. It's in this moment of crisis that Bruce discovers it. There are no words, but we know. We know when Bruce takes the carcass of a giant bat and wears it. It's this triumphant moment that tells us what Bruce is: he is a survivor, and he is a savior. With the help of his grappling hook, Bruce escapes and saves Boy. The two of them escape the tribe by jumping off a waterfall. 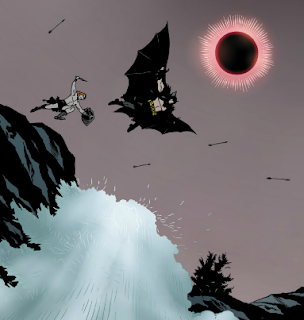 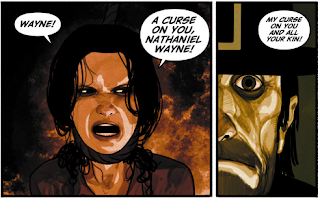 When the witch is being burned at the stake, she utters one last curse: on the village leader's lineage, and on Gotham itself! This is directly parallel to Vandal Savage's promise, and just as enduring.


Batman: The Return of Bruce Wayne #3
by Grant Morrison and Yanick Paquette

Bruce Wayne is thrown forwards in time again. He wakes up in a shipwreck as Blackbeard's hostage; the legendary pirate is convinced that he's the fabled Black Pirate (he isn't). Blackbeard forces Bruce to lead him to the cave of the Miagani, the "Bat people." 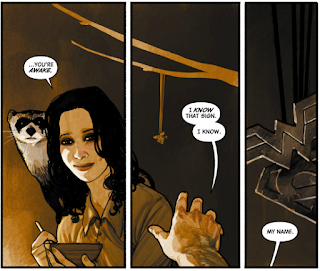 The theme of this issue is fear: fear and superstition. Blackbeard urges his crew to set the tips of his hair on fire, "to scare off any ghost or injun" while in the cave of the Miagani. This provides a direct contrast to Bruce who, when taking them through a hall of bat droppings, tells the men to burn out their torches and hold their breathes, for fear of the methane and explosion. Batman is a force of logic, but he has no qualms about using someone's superstitions against them (see above).

That'll be it for me today! Who would think that talking about Batman would have tired me out? Come back next week for the conclusion of my reading of Batman: The Return of Bruce Wayne. The latter half trails off into incomprehensibility, but I'll try to think it out for you. For America.

Email ThisBlogThis!Share to TwitterShare to FacebookShare to Pinterest
tags: /cover to cover, batman

Hi there, awesome site. I thought the topics you posted on were very interesting. I tried to add your RSS to my feed reader and it a few. take a look at it, hopefully I can add you and follow.

Batman is my favourite comic character in cartoon figures. The story is very nice. Thanks for sharing.

it's great character in cartoon. I love it

I start with the fact that their only marketing tactic they use is free shipping.One of the most popular Mobile accessories manufacturers out there that offers the best mobile cases in a variety of designs such as hybrid.best mobile cases