The Amazing Spider-Man #677
"Devil and the Details," part 1
by Mark Waid, Emma Rios and J. Rod

Oh man check those credits out. Javier Rodriguez's taken the nom de guerre of J. Rod. Spectacular! It's like the ol' days when Stanley Martin Lieber shortened his own name to Stan Lee. If I remember Javi's name right, he's done a lot of work with Marcos Martin. . . some quick googling confirms my suspicions. J. Rod, it sounds like a rock star! I love it. 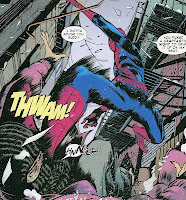 Besides J. Rod's colors, Emma Rios is on pencils and inks, and it's a perfect fir for Spider-Man. Spidey's motions are dynamic and kinetic, just like they should be. It reminds me of Max Fiumara from his Rhino arc with Joe Kelly. Spider-Man is jumping, swinging and wall-crawling like no other. The moves that Emma gives Spidey are exciting, and there's a great sequence where Daredevil and Spidey are racing down the Chrysler Building. 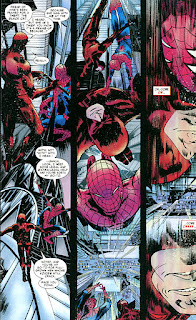 I can't say the same for the Spidey writing. In an attempt to sound witty, his dialogue comes off as wordy and not related to much of anything. It sounds like verbal vomit:


Being WHAT? MOI? DUMPED?

Ha! I don't know what you're talking about! That's WACKTALK! Who would dump. . .


Because we're not out of the CROSSHAIRS yet, magoo!

It takes more than a LIGHT SHOW to set off the warning buzz in my NOGGIN!

Is there anybody to whom this would actually sound like Peter Parker? Is there any magoo out there to whom this wouldn't sound like wacktalk? Maybe, maybe it's that person's Peter Parker. It doesn't sound like my Peter Parker. Another thing that came off as wrong to me: after a rejection from the Black Cat, he puts a Spider-tracer on her costume, which she discovers after her shower! Maybe he's doing it for her safety, because some police force actually barges in to arrest her later, but the way it's presented, Spidey is a skeevy dude who decided to track a girl to find out the address of her apartment. Oh god I didn't want to type that.

The final nail is in the coffin when Spidey barges in on Matt Murdock, gives away his secret identity in front of the DA. He literally hops onto a lamppost as Matt is walking with her and hassles them. It's this social insensitivity that's supposed to pass for youthfulness, maybe naivete, and it fails. The moral of this story seems to be, "Spidey is a skeevy douchebag. Read about his pal Daredevil instead." 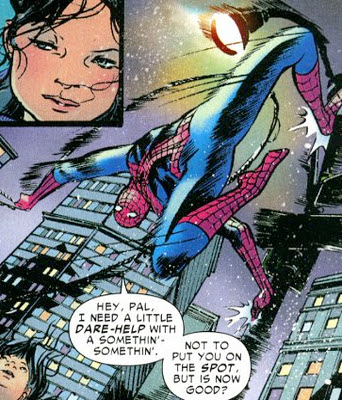 I'm almost done griping. The issue is 20 story pages (with 1 recap page, 1 letters page making 22) for $3.99. I haven't picked up Amazing Spidey since "Shed," and I'm glad I won't be picking up more in the future. The truth is, I would like to pick up this title and I'd like to enjoy it. I love comic books, and I hate to be so negative about this. Spider-Man is my favorite character, and he's the reason I love comic books so much. I thought the crossover with Daredevil would rope me back in, and it hasn't succeeded. It's only reminded me that the title's like reading a mirror-universe Spider-Man.

The art's nice -- incredible even, and I know the writing can put out quality stuff. If only it were these same creators, 5 years ago.

It's like the Avengers, but they're -shh- Secret. The tag line is, "Run the mission. Don't get seen. Save the world," and it's still just as appropriate as in issue #17. In issue #20, the Shadow Council's killed Steve Rogers, Sharon Carter and James Rhodes (referred to as "zero point"). It's Natasha Romanoff's job to go back in time, save the three, and change history, without having the appearance of changed it. The issue is a cerebral experience, and the reader has to use every single panel of information in order to understand the story. The beginning and end made sense to me, but I'm not entirely clear on the middle. She time-hops 40 years back to convince a Dr. Khronus to construct a time machine, then time hops 5 years back (from zero point) to manufacture a weapon that imitates the state of death, from a Dr. Evans. It's a genius comic-book idea. 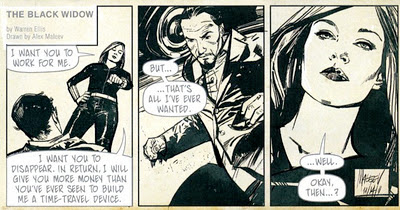 There's Warren Ellis's patented dry wit, and Maleev provides hypnotic pencils and inks. I'm serious about that last part: it looks incredibly nice, but there are a few lines in panels, enough to notice that they're just not as consistent with the rest of the lines. I found myself doing double-takes between panels and noticing some objects that had suspiciously more detail than others. It'd be interesting to have a look at how Maleev does his work. 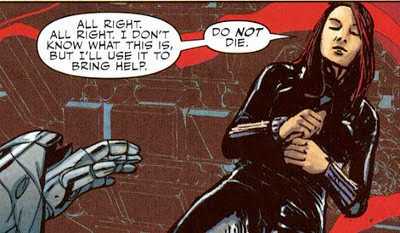 Anyways: a solid entry to the Secret Avengers. Worth at least 2 re-reads.