By the All-seeing Eye of Agamotto! What sick, twisted parallel dimension have I landed on?

. . . oh wait, it's just an update to the chezkevin user interface. I've added a twitter feed to the sidebar on the left, completely changed the color scheme, and there's now a "recent posts" widget on the bottom of every page. As always, if you have any suggestions, call me, beep me, if you wanna reach me.

It's an all-new installment of the all-new Spider-Man, and although there were some bumps, this issue retains the excitement of the first issue. While we learned about Miles' world: his family, his school and his dad, in the previous issues, Miles learns more about the world around him now. Specifically, S.H.I.E.L.D. takes him into custody, and Nick Fury has a talk with him, before Electro breaks free and wreaks his unique brand of havoc.

With Miles' defeat of Electro, he seems to be "initiated" into the cadre of Ultimate Marvel superheroes, and he finally gets his red and black Spidey tights. Despite my track record, I have little complaints against this issue, because it does move the plot forward. Sara Pichelli provides maybe one or two pages of finishes, while Messina picks up the slack. Messina's inks are a bit Frank Cho-esque, and retain the style that Pichelli's established -- it also helps that the same colorist, Justin Ponsor, does every page. I have high expectations for the next arc and the incoming artist, Chris Samnee.

Aw yeah Chew! Only these guys, only Layman could take a dark situation like Tony Chu's kidnapping and find the humor in it. Tony's force-fed the corpses of long-dead baseball stars, and not only is it repulsive at times, and tragic at times, it's hilarious at times. Only Chew could balance these different tones all at once. We leave the issue with Tony stuck in his predicament, and his friends still don't know where he his. One of them, former cop partner John Colby takes up the rest of the issue. 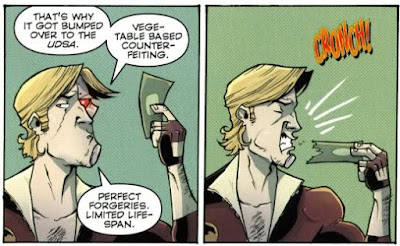 He's in the USDA now, and he uses the issue to solve the case of the counterfeit vegetable currency. All in one issue. Not only is Chew able to balance these different tones, it balances the ongoing plots with the immediate plot. It's nothing short of brilliant.

Chew is always a pleasure to pick up. Try the first issue, for free, at comiXology. You might like it as much as I do.


This concludes the two-part crossover with Spider-Man, originally begun in Amazing Spider-Man #677. I had my fair share of bile for the first part, but this one escapes my virtual vitriol mainly due to the focus on Daredevil and Black Cat, and not Spider-Man. In particular, it focuses on them flirting and making out. Together the two of them break into Terra-One corporate HQ to re-steal a prototype wi-fi holoprojector that was originally stolen from Peter Parker's workplace. Hot and heavy making out ensues afterwards. 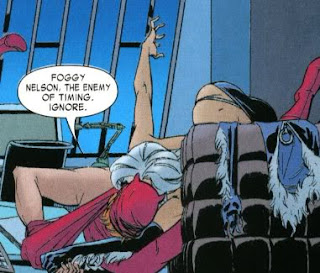 Despite his tangle with Spider-Man, Daredevil's title remains a must-read.