The Goblin King (aka, the Green Goblin, aka, gobby, aka Norman Osborn) discovers the Superior Spider-Man's true identity! And what he does next you WON'T see coming!

I sure didn't. Every issue is a roller-coaster through New York City. When Otto refuses to become the Goblin's "second-in-command," the two of them wage a war with NYC as the battleground. It's such a great character moment from Otto, because I honestly didn't know how Otto would react. And the way he did explained so much about him. He's adopted his new identity as Spider-Man in the truest sense by challenging his greatest enemy, the Green Goblin. And he does it so arrogantly:


NEVER! You underestimate me, Osborn!

I WAS Doctor Octopus. Now I am something FAR GREATER!

I AM SPIDER-MAN! I WILL free my city from your grip! And this shall be MY FINEST HOUR!

It's Otto's affirmation of his self, now that he is Spider-Man. He truly believes in it, and he truly believes in himself. His assertion of "something far greater" is a call-back to that prelude story to Superior, "Dying Wish." When the dying Dr. Octopus promised to do something great. . . who knew that it would be as the Superior Spider-Man? Who knew that he would dramatically reduce crime, help his Aunt May walk without a cane and let Flash walk again after the amputation of his legs, start a new company, get a PhD, and find a new love? Otto's world was threatened with death, and now he's filled it with life. It took a heinous act against Peter Parker to do it, but he's lived up to the legacy of Peter; in a way, it's an all-new Spider-Man story for a different world. Otto was Peter, and Peter served as Uncle Ben, bestowing on him the lesson of great power and great responsibility.

Gobby puts that lesson at risk through numerous trials. He blows up the homes that Otto formerly occupied, unleashes the Spider-Slayers created by Alchemax and J. Jonah Jameson, and he creates death scenarios for each civilian that Spider-Man has rescued, including his Professor from ESU, and yes, his girlfriend.

It's after a close call for a little girl, where Otto hesitates to save her, that ghost-Peter takes over and gives up his advantage to save the girl. In a way, Peter redeems Otto for his hesitation, and in that moment Otto realizes that he's not the right Spider-Man for this crisis. For love, Otto gives up his identity, his very self, to return Peter back to his body. 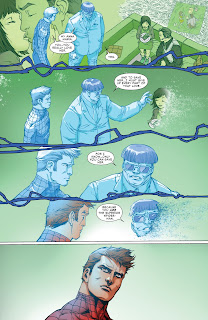 The story concludes how you'd expect it to. But it's in the way you get there that's interesting. If you've been following my read-alongs up to here, I encourage you to pick up the trade and read it for yourself.

A special note: this is the conclusion, but not the end. As a comic book, there has to be a next issue (continued in Amazing!), and while there's a satisfying conclusion, there are numerous hints to a future storyline. Liz Allan and her son, Normie, part of a Goblin conspiracy? And what of Anna Maria, now that the Peter she loved. . . is dead? 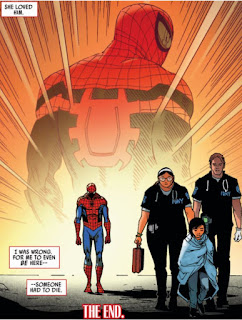 As a medium, the comic book is unique in that it's serial. Some comics end, like Fables or The Sandman. But super-comics are different. We're reading about the same Peter Parker that's been slinging webs since 1963! Superior was a nice diversion, and while it stands alone as its own story, there's always another story to tell. It seems that Slott always has ideas to share, so while he's got 'em, I'll read 'em.

This being the Superior conclusion, there's huge, widescreen spreads with an emphasis on action. It's great! Here's a two-page spread where Peter's infiltrated Otto's mind, in an attempt to get out of the "Mindscape." 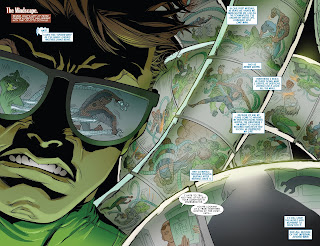 It's a trippy sequence where Peter must relive key moments in Otto's life and literally empathize with Otto.

Here's a wicked two-page spread, where the Goblin comes through on his promise to destroy the Superior Spider-Man's -- and Otto's -- legacy. 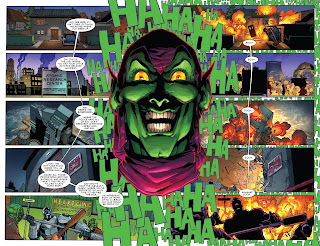 Some meta-commentary, when Peter-as-Spider-Man asks Spider-Man 2099 for help in fighting Gobby:

An Amazing reboot followed Superior, in 2014! Read about it in Amazing Spider-Man Volume 1: The Parker Luck.