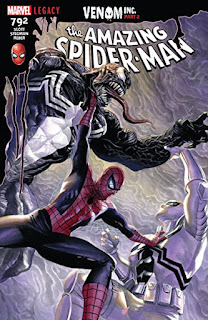 Dan Slott takes Spider-Man to new places, and sometimes it's a little . . . weird. Flash, as the new "Anti-Venom," strips Eddie Brock of the symbiote, and contains it for safekeeping. Apparently, with Flash, it's like a pet now, so you see Flash cuddling with it in weird ways. 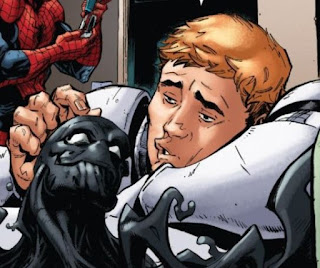 Yeah. The other weird part is Spider-Man's spoken dialogue. There's a lot of parts that just sound strange coming out of Spider-Man's mouth. He comes off as a hyperactive teenager, which Bendis did in a much better way, in Ultimate Spider-Man. It's hard to tell whether these oddities are meant to be humorous, or whether they're a serious evolution for the characters. The cognitive dissonance just makes for a confusing issue

A weaker issue that leads to a confrontation between Spider-Man and Anti-Venom, and Venom-Black Cat.

This issue is an extended chase scene, with the full force of the NYPD chasing Daredevil across the rooftops and the streets of New York. There's a nice surprise at the end with how Daredevil gets out, and a killer cliffhanger. It's a job offer for Matt Murdock that comes out of nowhere, and his response comes out of nowhere as well: he goes all in on the job offer from Kingpin. See, that's why we call him the Man Without Fear -- he doesn't hesitate to know the unknown, and to jump without looking. That's all I need to know, to know that Charles Soule understands Matt Murdock.

It's an exciting place for Matt that makes me excited to see where it goes next!

Another thing I noticed about this, but when you have the comic in your actual hands, it gets real easy to admire the penmanship. Just look at this zipline. The panel cuts it off near the top, but it's crazy to think that it's just a single line that can make you imagine depth and length. It's great. 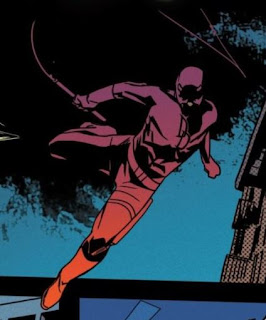 There's a full page in the first half with Daredevil slinging around NYC, and it's great fun just to follow the lines from his cables. Occasionally there are phone-it-in panels that re-use other panels, but overall good fun. 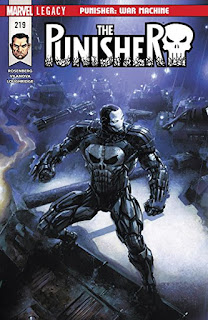 The Punisher #219
by Matthew Rosenberg and Guiu Vilanova

I was surprised to find out just how funny this book is. There's a wry sense of humor that comes from Frank's interaction with the War Machine's AI. They're both the straight men, with Frank's no-nonsense approach to, eh, murdering bad people, yet still it works. Check out this scene where Frank tries to understand why his machine gun failed to operate: 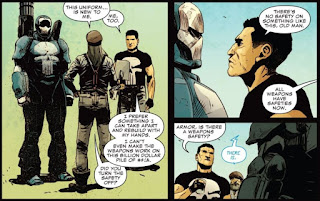 Frank's operated a plethora of weapons during his time in Vietnam, and surely in his war on crime. You'd think he could operate one that can take voice commands, so it's pretty funny to see that his weapon can talk back now, and tell them when he's using it wrong.

The frame of the story is an old man's farm that's about to be stolen by General Petrov, the bad guy that means to instate military rule over Chernaya, using ill-gotten weapons from S.H.I.E.L.D. His soldiers approach the old man to forcefully take his farm, when Frank butts in to save him. There's at least 3 redonk murders here that are certainly not for the faint of heart.

It's a great microscopic view of the macroscopic story. The old man is an allergy of Frank. He served in multiple wars, and outlived both his wife and children, but the farm allowed him to pretend, to get away from all the fighting. The tragedy of course is that Frank could never pretend. When his armor tells him that there are no remaining threats, and that the conflict is over, Frank gives a chilling "Don't tell me when the conflict is over," and sends a missile to blow up the guys that are retreating. This is a comic that can balance the light and the dark, the funniness from Frank's situation along with the grimness.

Easily the best issue for me this week, a great reflection of Frank's character through allegory (the old man) and foil (the War Machine AI). 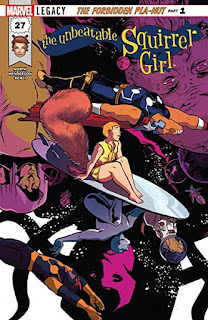 The Unbeatable Squirrel Girl #27
by Ryan North and Erica Henderson

A hilarious issue despite all of the infodump provided. Squirrels from the planet Chitt-crrt have accidentally kidnapped Nancy Whitehead, Squirrel Girl's college roommate and Tippy Toe, Squirrel Girl's pet squirrel, in order to discover how SG stopped Galactus from devouring Planet Earth. It's a joke that gets slightly hammered over the head, and then they're distraught when they find out that SG simply -- befriended Galactus! There's this aura of positivity around Doreen Green that lets her do that, and some might even call that a superpower!

There's a bro-ey depiction of the Silver Surfer here, which is, well, different to see, and then SG finds the Sorcerer Supreme (Loki Laufeyson?!) to try to find her friends. It's old-school Marvel team-up in a brand new world.