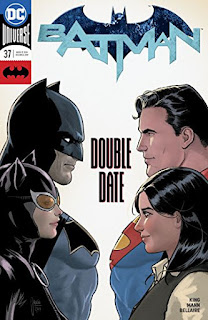 Tom King concludes his two-part slice-of-life story on how Batman breaks the engagement news to Superman and Lois Lane. In this one, they go on a double date, but with a twist: it's superhero night at the carnival in Smallville, so the two pairs must cross-dress. . . that is, Bruce dresses up like Superman, and Lois dresses up like Catwoman and so forth. 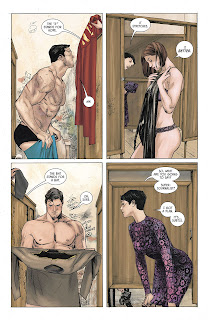 What, you were thinking of Batman in a catsuit? If only we were so lucky!

He grounds the superheroes in an uncanny way. Where their caped identities are by far the dominant egos of their lives, Tom King humanizes them in a way that makes them relatable. It's like following the lives of your favorite royal celebrity. If they ate toast, you'd want to know where they got their toast from. 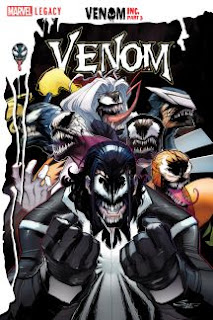 Parts 1 and 2 didn't make for much of a story. Part 3 gives you at least a look at how Eddie Brock feels now that his symbiote is severed from him. In the weirdest way, Eddie Brock is the person to ground the story, where Spider-Man and the others are supporting characters. I don't collect Venom regularly, but that seems appropriate in a Venom comic, but not necessarily a Spider-Man story.

Again the plot moves forward, but with little story to make it mean much.