We meet Spider-Man 2099 in this volume! Well, we meet him again, for anyone familiar with Miguel O'Hara, the Spider-Man of 2099. Major changes happen in ishes 17-19, namely the acquisition by Allan Chemicals, of Horizon Labs, with a rebrand as "Alchemax." It's a frightening step toward the future, into the hover-cars and holograms of 2099, but one that makes logical sense. I don't think I'll be alive to see an actual Spider-Man 2099, but it's nice how Slott incorporates these threads of Spider-Man together.

I think this storyarc will probably jazz up long-time fans of Spidey 2099, but for me, it was nothing more than a standard entry in the books of the Superior Spider-Man. There's a crucial moment for Otto-as-Spidey, when the people at Horizon Labs are counting on him to diffuse a time bomb with an equation that only Peter Parker knew -- but since Otto purged Peter Parker's mind from his, he's unable to deduce the equation. There's a great sequence of him as Peter, in classic moments of Spider-Man history like the time he lifted debris over his head in Amazing #33 or Gwen Stacy's death in Amazing #122. For all he's experienced through Peter's memories, he still fails to deduce the equation:

Issue 20 tells the story of Otto-as-Spidey's "first" encounter with the Black Cat. The interesting thing about this Superior Spider-Man is that, since he's flushed his mind of most of Peter's memories, a lot of things are a "first" for him. So, we get to see how he interacts with her: 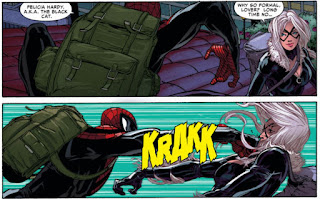 . . . it's not pretty! You see, for Otto, he's got a date with his *actual* girlfriend, Anna Maria. So to him, the Cat is just another crook (and former enemy of Otto Octavius) to deal with, so that he can have dinner with his girlfriend on time. 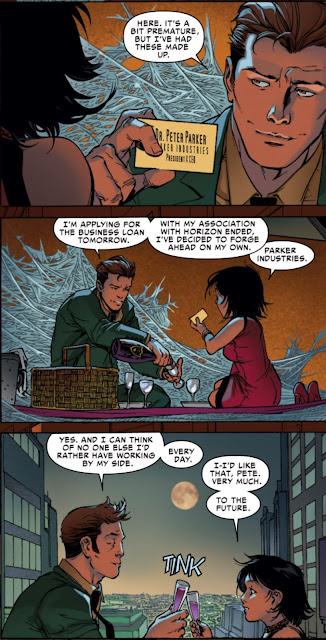 The plot moves in substantial ways in this single issue, and that's not all -- Otto-as-Spidey presents his thesis for his MD, and the board accuses him of plagiarizing the work of the late Dr. Otto Octavius! What a unique dilemma that could only happen in this kind of story. Where Peter ran into his own issues -- drug addiction from his friend Harry Osborn, medications for his Aunt May -- Otto runs into his own -- threats to his medical degree and his own romantic life. It's uniquely a Spider-Man story, and uniquely a "Superior" Spider-Man story at that.

The last issue wraps up some of the smaller subplots in a significant way, that could only be told in the suddenly Superior style of Dan Slott. It's another strong trade paperback from him and friends, so pick it up for yourself and see!

In a clever callback to the very first issue of Superior, Carlie Cooper, police detective, discovers the truth about what happened with Spider-Man and Dr. Octavius in Columbus Circle. The page directly mirrors the format on the first page of the first issue. Here they are, side-by-side: 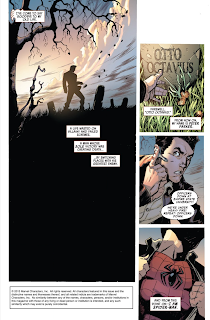 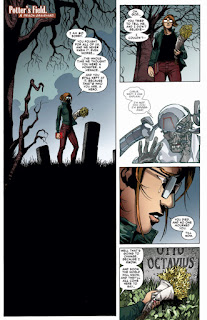 The truth begins to unravel -- how much longer can Otto keep his lie? Tune in next time to find out!