Comic book readers are a strange bunch. We seek novelty every month, yet we also expect familiarity. There's a comfort in knowing that your favorite comic will always come in another 4 weeks. It's nostalgic to think about the days in college when I could easily walk to my comic shop every Wednesday and pick up my pull list. But at the same time, we need novelty. We need new things to happen every time we pick up an issue, or else it becomes repetitive and we pick it up out of habit. I've been in this trap time and time again. I've had to donate hundreds of old comic books just because I picked them up out of habit, out of seeking novelty but not finding comfort or joy in them.

This dual tension means comic book writers have to walk a fine line between novelty and familiarity. I'm on the very last paperback for Superior Spider-Man, and let me tell you, nobody does it like Dan Slott. He does it so well. If you were unaware, there were a few years where Peter Parker and Otto Octavius -- Dr. Octopus -- swapped minds. Otto swapped Peter's mind into Otto's dying body, and got to reap the rewards of a young, healthy, Peter Parker body. But, he also gained Peter's memories and the lesson of great power and great responsibility. So, Otto vowed to become Spider-Man, but not just any Spider-Man, a Spider-Man superior to his predecessor. It kicked off a brilliant storyline of a new Spider-Man with a different perspective.

Read my take on the first issue here: http://chezkevin.blogspot.com/2017/10/superior-spider-man-1-peter-parker-and.html. Today we go through the next four issues.

That first page gets me each time. Four panels, simple, succinct and gets you up to speed. Issue 1 has everything you need to know about Superior Spider-Man. I could read that page every time I pick up Superior Spider-Man, it's almost like an opening credits scene in a cartoon.

Each issue is both familiar and novel. They show you every aspect of Spider-Man and Peter Parker's life: stopping crime, seeing his family, doting on Aunt May, stopping a villain, seeing Mary Jane. And then they twist the dial because it's not actually Peter Parker under that mask. It's Otto Octavius's brain inside that face behind the mask! It's both comical and terrifying to watch him court Mary Jane, as we would expect Peter Parker to: 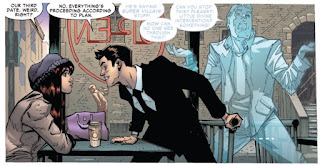 But then here's the twist. Otto does something that Peter would never do. After saving Mary from (yet another) supervillain attack, he tells her:

I promised to keep you safe. But our relationship is the greatest trap of all. And the only way to FREE you--is to move on.

In a way, it's a metaphor for Peter Parker. He never could learn to move on, so devoted was he to Mary Jane. As a reader, it tugged at our heartstrings to see the two of them together. After Gwen died, Mary was the one who didn't give up on Peter. She was there for him, and they were there for each other. But Otto is different. Since he has Peter's memories, I suspect that he loves her all the same, but he expresses it in a different way. He does the hard thing, and, for her sake, he lets go of their romantic relationship. Superior offers this platform for us, as readers, to see things that we never thought we'd see -- it's utterly brilliant.

Another thing that Otto-as-Peter offers us: mad scientist Peter Parker.

Since he has access to a groundbreaking lab at Horizon, Otto-as-Peter creates a revised version of Otto's Octo-bots, first introduced in Amazing #600. And again, it's both comical and terrifying! Can you believe this is all in the second issue? There are so many new ideas per issue here, it's astonishing.

Issue 3 is -- I'll say it again -- brilliant. There's a two-page sequence where, now that Jonah is Mayor, he thinks he can call Spider-Man at his whim, so he sets up a "Spider-signal," a beacon in the light, to summon Spider-Man whenever he wants. Otto coolly sees it, and destroys it, implying that it was a test by Jonah on whether or not he could let his enemies know where he is -- and he passed it. Check it out on comiXology. 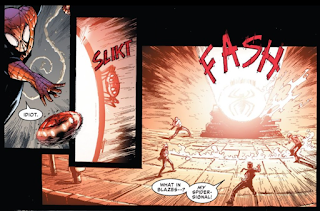 
A giant BEACON in the sky, announcing to ALL my enemies where they can find me. Only an idiot would put that into effect. And Mayor J. Jonah Jameson is NO IDIOT.

So clearly it was a test. And I passed.

The scene is both parody and character statement at the same time -- we all know the "idiot" that Spider-Man is referring to, and only Otto would be arrogant enough to think he knows what's best for everyone. He gives Jonah an encrypted phone that the two of them can communicate on, and they go about their business.

The main villain in this issue is the original Vulture, Adrian Toomes. In a way, everything old is new again, since it isn't your typical hero-meets-villain, hero-beats-villain story. Otto-as-Spidey feels a kinship with Adrian, as founding members of the Sinister Six, and he tries to convince Adrian to turn away from his life of crime. Unfortunately, Adrian doesn't believe it, and it results in a violent fight that destroys the Spider-signal and burns Adrian to unconsciousness. We also get a glimpse into Otto's past: when the Vulture sics his children minions on Spider-Man, he unknowingly beats one away, to learn that he beat a child, much like his dad beat Otto as a child. It's a moment of sympathy we feel for Otto -- but just a moment. 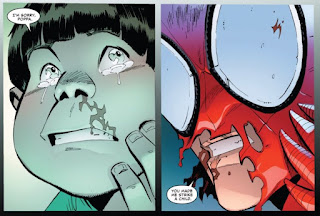 Spider-Man's characterization continues in issue 4 -- with his Spider-bots, he's now quantifiably superior to Peter-as-Spider-Man, apprehending four times as many criminals and preventing the theft of an additional twelve million dollars in property. Wow! To boot, he routes a building fire to the fire department, much to ghost Peter's dismay -- only to find out that he ditched it to attend Aunt May's physical therapy session.

Not only does he prevent more crime, but he spends his personal life better. When he realizes that Peter never completed his doctorate, he then re-enrolls himself so he's even helping Peter's life! Geez!

Anyways, the villain of Issue 4 is Massacre -- the man who had a piece of shrapnel lodged in his brain, causing him to feel no emotion. Massacre is kind of like Abbatoir of the Batman series, he's really there to kill people, another hurdle for the super-hero to jump over. This flows into Issue 5, where we do see Otto-as-Spidey jump the hurdle -- by murdering him.

Another important plot point: Otto incorporated face-recognition into his Spider-Bots. That was how he located Massacre so easily in the thick of New York City, and now, he can use his Spider-Bots to locate anyone he needs to! We'll see for ourselves whether that's a good thing or not. 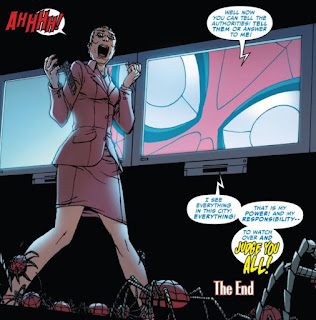 In a way, it's a perversion of the Spider-Man that we know. How can we like this Spider-Man here, when his means are so ruthless? It's kind of like the feeling we would have for the Punisher -- Otto-as-Spidey doesn't take it out on anyone who doesn't "deserve" it, and in a twisted way, we like to see people get their comeuppance. At the same time, it's refreshing to read about this Spider-Man. He does things that Peter Parker would never do, and so it's novel to us. Same old people, kind of, but all-new stories.

Volume 1 sets up everything you need to know about Spider-Man. We meet the new love interest. We meet the Spider-Bots. We see the new Spider-Man's methods. We even meet the Green Goblin, for one page. Now that there's a "Superior" Spider-Man, he wants to take up the challenge and, again, destroy his old foe. Amidst all the setup is this great characterization of a different Spider-Man. It's all familiar, but with a twist that keeps you guessing, the stuff of great super-comics.

BONUS PANELS:
Otto-as-Peter patrols the city, with his web app! 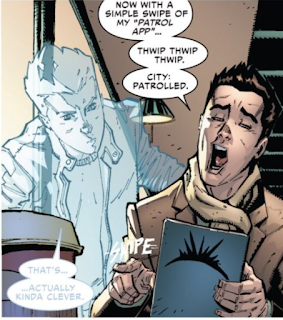 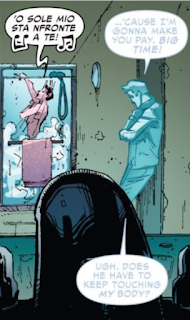