Before Planet Hulk, the Planet -- of Sport!

A savage alien planet. A corrupt emperor, pitting gladiators slaves against one another to the death. . . today we're talking about the comic book story that was a part of the hit movie Thor: Ragnarok this year. . . The Flash, in "The Planet of Sport"!

What, you thought it was Planet Hulk?

"The Planet of Sport" has a publication year of 1947, a whopping 59 years before Planet Hulk. Don't get me wrong, I consider Planet Hulk a brilliant take on the Hulk, for the way it infuses pathos into the life of the Hulk and adds a compelling supporting cast. But if Marvel made it better, you can bet your bottom dollar that DC made it first. So here he is, in All-Flash #31, "The Planet of Sport." 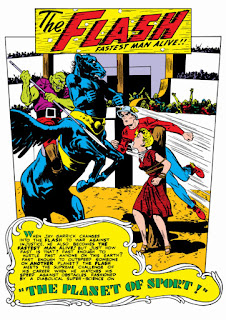 Jay Garrick and Joan Williams are entertaining a couple of Olympic champions at the Keystone City Zoo, when something sweeps them away to Strobos -- The Planet of Sport! The emperor there, Jaxos, kidnapped them to put the Olympians through some sport. . . to the death!

There's a Sasquatch-esque wrestler with sticky fur, and an alien fencer with four arms. As you might expect, the Flash dispatches them with ease, using the friction of his speed to shave the wrestler, and his super-speed to outfence the fencer. Emperor Jaxos uses a neat "stroboscopic viewer" to see the Flash in action:

It's solid Golden-Age comics, with a dirth of imagination that visual fiction hadn't seen yet. In a later trial, Emperor Jaxos kidnaps Joan and forces Jay to race for her life -- of course, the race is rigged, and right before he can cross the finish line, the Flash gets trapped in a glass bottle. It's a hoot how he gets out. 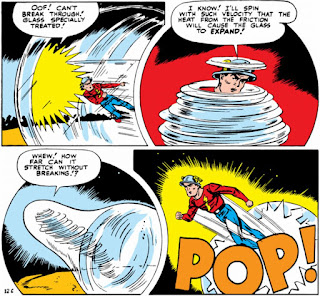 In the final trial, Jay has to fight Emperor Jaxos himself, and -- holy $^!*, he blows up the Emperor's head. 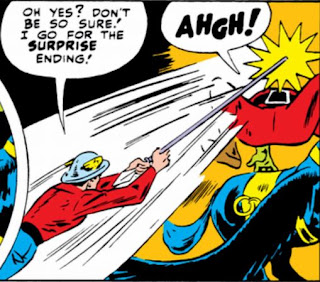 Nah, just kidding. He knocks him out, frees the slaves of Strobos, and they send him back to Earth. One and done!

When you read enough comics, they all start to blend together. Planet Hulk follows a similar storyline, although the ending is much more tragic. I guess in the Golden Age, it was different then. You could just end on a happy note, then.

You can read "The Planet of Sport" -- and more -- in the DC publication, The Flash: A Celebration of 75 Years.

Email ThisBlogThis!Share to TwitterShare to FacebookShare to Pinterest
tags: .DC, The Flash