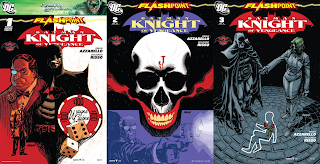 It's always interesting to see how these new timelines/Elseworlds allow for different versions of your favorite heroes. For example, Red Son gave us Batmankoff, while Bloodstorm gave us Vampire Batman. In the Flashpoint rendition of Batman, Bruce Wayne was murdered in Crime Alley, and his father Thomas became Batman. And he's much more murder-y than the Batman we know. His assistant, interestingly enough, is Oswald Cobblepot, Selina Kyle is the paraplegic Oracle, and worst of all, Martha Wayne -- Bruce's mom -- became the Joker. 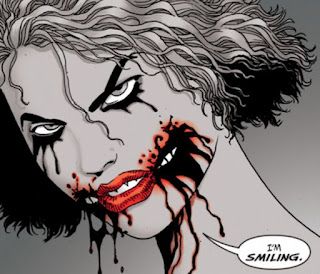 It's serendipitous how everyone has a role. Since it was only three issues, there isn't much time to dig too deep into their backstories. But issue 3 has all the meat, fleshing out the history between Thomas and Martha. Bruce's death drove a wedge in their marriage, and Thomas thought that he could drive it out by murdering Joe Chill. When he does though, it's the final nail in the coffin for Martha's sanity, setting them both on a course to become nemeses. Thomas couldn't believe what Martha had become, and likewise for Martha. It's only when Thomas tells her that there could be a life where they died instead of Bruce, that Martha sobers up. There's a glimmer of light in her eyes, but then. . . 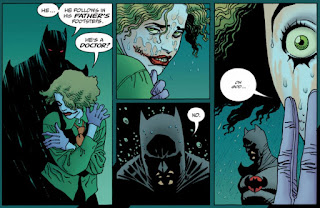 Thomas tries, in the nicest way, to convey to Martha that their Bruce would be OK in this timeline. But when Martha learns what he actually means, it horrifies her. For her, to become Batman is a loss in and of itself. To her, regardless of the timeline, their happiness is forfeit, and that drives her crazy. As long as the Batman is involved, it's an inescapable tragedy. That's the key understanding that Azzarello has of Batman here. He's a tragic character, no matter the timeline and we realize that in horror with Martha.

Wonder Woman has to save Zola's baby, but to do that, she has to find her first. Last time, Hermes kidnapped the baby, and now Wondy enlists the aid of her brethren -- not the Greek Gods, but the recent children like her, a girl who was born in Palestine in the 1900s' with the power of the wind, or a homeless man who can see the world through the eyes of flies, and more. Like the Greek Gods in the last 12 issues, it's fun getting to discover who these people are, but occasionally I lost my direction in the book. It's not clear why Hermes kidnapped the baby, and the whirlwind of characters, including Orion of the New Gods, gets to be a hindrance this time, when you're trying to make sense of the story.

There's a subplot with the "First born," the first child that was ever born to Zeus. It seems to be a riff off of Zeus's story: how Zeus would overthrow his father, Cronos, the same legend was told of Zeus's son, the "First Born." So Zeus sentenced him to death, but Hera loved the child and couldn't bear to kill him, so she hid him somewhere in the Arctic. They even date it for you: 7,000 years in the past. This subplot seems to have a resolution when Cronos and Poseidon have a battle in the ocean, but it's not really clear what their whole deal is. I presume they'll bring it up in a later volume, but it makes volume 3 seem scattered.

Issue 0 is also in this paperback, which shows a flashback to 13-year-old Diana and how she first started training with the God of War, Ares. It's a great character piece that speaks to the adventuring spirit in Diana, as well as her way of fighting with compassion. Guest starring the Minotaur!

What a great visual story in one page, of Wonder Woman defending her sister from a storm of weapons. 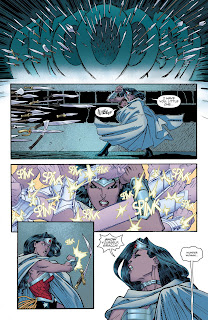