Happy Wednesday! ComiXology is having a nifty sale for the Holidays, and they're pimping it out at their blog. There are some indie books, 201 Batman singles and many selections from Marvel's side including Captain America and some Brand New Day Spider-Man. I know I'm going to get the Zeb Wells/Chris Bachalo three-parter from Brand New Day Spider-Man.


Not only has Layman mastered the serial format, he's added his own touch to it. Issue 22 is part 2 of "Major League Chew," and it's a goodie. It doesn't follow directly from part 1, and it doesn't have to. Instead, we see Tony Chu's daughter, Olive, kidnapped by the rogue FDA agent Mason Savoy. Then, the issue goes back to Chu getting beaten down by golf clubbers. Layman is playing with the format and the reader in a way that's clear and unique. 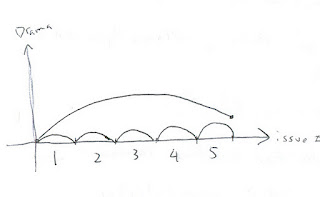 I've drawn a little diagram here. Under each number, there's one little arc, and above it is a larger arc. With any given issue, the reader has one small, self-contained story, but it's not until they read each issue together that they have the larger story. Also, the bigger arc ends on a higher point than it began -- this is because we know more about the characters than we did at the beginning: their stories mean more to us now.

The ability to juggle two different types of stories, this is one of the strengths of the serial format! Some comic books only accomplish one or the other. Chew accomplishes both. In this issue Olive, Savoy and his FDA partner Caesar take down the curious case of the black-hearted barista and the lethal lattes. 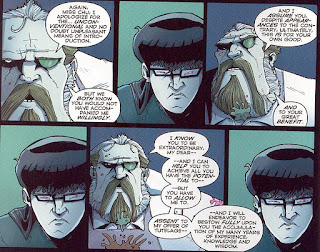 Here's a few panels from page two of the issue. Look at the three different panels of Olive. They're different! Guillory could have easily photoshopped the same picture of Olive, three times, but he doesn't. The discipline of this guy is staggering. He doesn't take any shortcuts to the storytelling, and Layman is giving him a great story to draw. That's why this book has won an Eisner, and that's why it's my new favorite comic book. I can't wait for #23.

Issue 4 concludes the first storyarc of Ultimate Comics The Ultimates, and it doesn't end very well. Thor returns to "The Dome" to avenge his fallen home Asgard on "The People," and fails. Then he goes to Nick Fury to say that they should just leave "The People" alone with their new European conquests. Yes: after this open act of global hostility, Nick Fury is supposed to leave these people alone with their spoils, and beside the out-of-nowhere character reveal that I don't care about, that's how the issue ends. It opened with a bang and closed with a whimper. 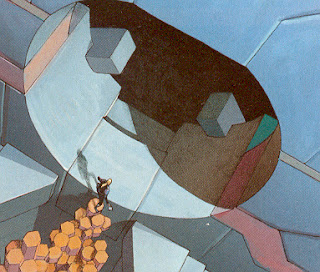 Sure, Esad Ribic is killing it on the pencils. The angle and the width of that panel are a great example of his storytelling. He excels at bringing Hickman's sci-fi high concepts to life, but it's disappointing to pay 3.99 for this comic book issue and accept issue 4 as a story.

I'm sorry Ultimate Comics the Ultimates. You're real pretty, but you're just not worth the money. (. . .did I just dump a hooker?)