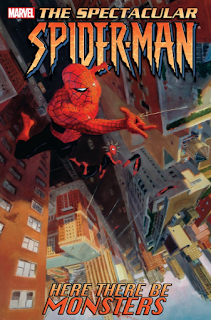 by Paul Jenkins, Damion Scott, and Paolo Rivera
collects Issues 11-14 of the 2003 series

This is actually my second reading of this TPB. I bought it at a convention for dirt cheap, and then bought it digitally, also for dirt cheap. Issues 11-13 is a Lizard story titled "The Lizard's Tale," while 14 is a standalone story with paints by an early Paolo Rivera. Man, check out that cover. So creative. So energetic.

I guess it took my two readings for me to "get" the story of "The Lizard's Tale." I didn't like the art much then, and I still don't favor it now. It's far too manga-influenced and exaggerated for what I now understand is -- get ready for it -- a crime noir take on the Lizard.

This story's got it all from the genre: a man on the edge, an ineffective hero, a hard-boiled cop. And most importantly: an unreliable narrative. Curt Connors comes to Peter in a plea for help and faltering attempts to hold the Lizard persona at bay. He can't get over the death of his wife, and it's doing a number on his psyche and his son Billy. But you're never quite sure who's in control: the Lizard or Curt, and Curt's account of a mysterious explosion at a rival's laboratory doesn't exactly ring true to Peter. The transition from Issue 11 to 12 will make you double-take, and it's a clever use of an unreliable narrative. 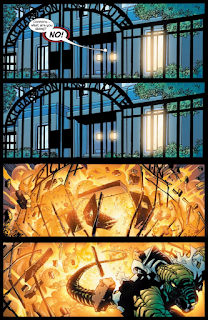 SPOILER: Peter finds out that Curt was in control the whole time, and using the persona of the Lizard to enact his deeds of revenge, to feed his inner id and need for rage. It's a nasty retcon that throws an otherwise tragic character under the bus -- and while some might disagree with it, I think it's genius. I believe it, and it's relatable. Everybody has this reptile brain that tells them ugly things, but we live in a civil society, and we want to keep that civil society. When Curt makes this reveal, he's telling us that it was him all along, a very human answer to a typically superhuman comic book. His transformation into the scaled monster was merely a reflection of the ugliness inside him. It's only when his son innocently calls for him that he snaps out of it, and willingly turns himself into the police. In fact, Spider-Man had nothing to do with bringing Curt to justice, and he's a bystander to Curt's downward spiral.

Sometimes that's how life is. It just happens and you can't do anything about it. No amount of punching or wisecracking will solve your problem, and even when you win, you lose. This was a twist for the Lizard that came out of nowhere -- and it could have used a different artist to match the tone. The colors should have been more muted, and the anatomy should have been more realistic. That said, I still thoroughly enjoyed this story for its deceptive take on an old character.

Issue 14 is an untitled one-shot from the perspective of Joey, a New Yorker who has cerebral palsy. His parents let him outside so he can watch the city, and as it turns out, he's one of Spider-Man's biggest fans. It's a pensive slice-of-life kind of story that Paul Jenkins does a good job with, telling us about his life and the sacrifices his family makes for him to help him. While he can watch Spider-Man zip around the city, there's a monster watching him -- Morbius, the Living Vampire! 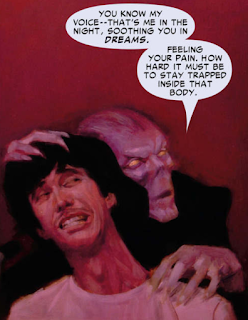 Spider-Man's been tracking Morbius down, and when the two meet on the rooftop, a brawl ensues -- and Joey has a front-row seat to it.

Predictably, Spider-Man wins, ending the action of the issue, but then Spidey does something unpredictable. He unmasks before Joey so he can see his face. 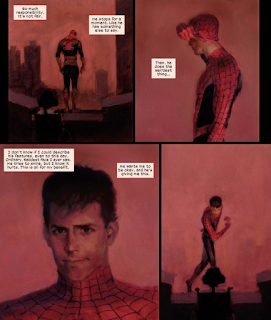 There's a lot in that moment to take in. When Peter puts on his best smile, Joey sees the man behind the mask, and he learns that there's a sadness behind that. It's so much that Joey even says he feels sorry for Spider-Man. This is the kind of point that Jenkins tends to get back to. For all his high-flying adventures, it sucks to be Spider-Man. And when Joey finds out, so do we.

Damion Scott draws the hell out of this page. I love the second panel there of the lizard. at the same time that you see Spider-Man falling down, he's crawling down. You have to re-orient yourself from Panel 1 to Panel 2, which makes for a fun read. 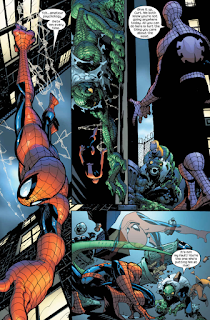