Injustice: Gods Among Us Year One 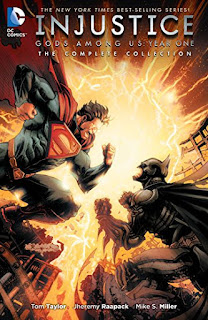 So, this title came out as a video game tie-in. I dabbled in the game myself, watched a few videos, but never bought it to play. I was more interested in the story, so I finally sat down with the Year One digital trade paperback, and binge-read the first year.

It's an interesting experience, just on a meta-level. The digital chapters are told in 1/2 pages, so that you can easily scroll through them. Basically 90% of all my comic reading is on my convertible laptop now, so it was unique, almost tailored for the landscape orientation of the laptop.

Take, for example, these two 1/2 pages. There's a natural break in between each page, that allows us to pause between Harley getting gassed, and Harley waking up. It's a useful storytelling device that allows the creators some more control over how we read the comic book, for example, because I've certainly had situations where my eyes wandered ahead on the same page, and inadvertently spoiled the page for me! 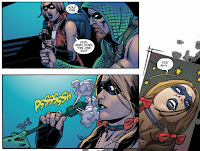 If you haven't heard of Injustice: Gods Among Us, here's a recap: Joker concocted a mix of the Scarecrow's fear toxin with Kryptonite and engineered a situation where Superman hallucinated that Lois (and their unborn child) was Doomsday, and so Superman murdered his wife, and the whole city of Metropolis, in the mistake. It caused him to mistrust the entire planet and so he took a hard line on the planet's woes, overthrowing dictators and whisking super-villains away to an unnamed area. Batman takes caution against all of this, and would prefer that super-heroes leave politics to humanity, and so he forms his own band of heroes as a resistance. 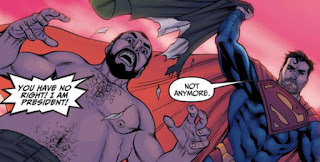 It's kind of like Marvel's Civil War, but with the Justice League, on a slower burn and much more believable. You could see yourself rooting for and against either side, because they both aren't awful people, but they're doing more and more awful things to get what they want. It's a Justice League story that wraps around the entire DC Universe, and Tom Taylor employs that to the fullest, creating combinations that you don't see normally, like when the Martian Manhunter shapeshifts inside Wonder Woman's body to threaten to cut off the oxygen to her brain (oh snap!). Or when Harley Quinn holds a psychotherapy session with th' Main Man, Lobo. This is a great story not because of these shocking events that occur to these characters we'd otherwise never expect. It's a great story because we believe in the characters and how they shape the events around them. Annual #1 is a brilliant character piece on Harley Quinn, and how she can be her own character now that the Joker is gone. 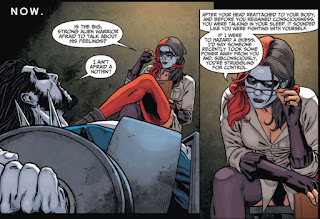 Injustice: Gods Among Us is an exciting blend of familiarity and novelty, and an example of what you can do when you give your whole toys -- your whole universe of toys -- to some talented people to play with.