WARNING: MATURE THEMES AND LANGUAGE AHEAD. TRIGGER WARNINGS FOR ABUSE
Wow...I started this series over 3 years ago! And it took me today to conclude it. There are two stories in this final collection of the 2001 series. The first is a flashback "origin" sequence of sorts, that retcons Jessica back to a high schooler in the same year as Peter Parker in Midtown High. If you can imagine, she was even nerdier than Peter was, and just about to ask him out to a date, when he got bit by the spider. Fair enough. I'm going to try to be spoiler-free, but Jessica gains her superpowers through a traumatic event, and so you see those first few moments of Jessica's discovery as well. 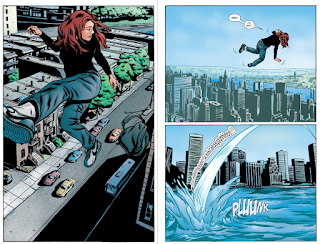 You could say it's really cheap how they use that moment to fill out the page, but that's part of the strengths of the art team. This moment, blown up, gives emotional weight to this significant part of her life. Bendis is so good at these moments.
The second story comes back to the present day, when the Purple Man, Kilgrave is in the maximum security supervillain prison, The Raft. A group of people reach out to Jessica's company Alias Investigations, to attempt to reach closure on what the Purple Man did to them or their loved ones. While Kilgrave has already confessed to enough of his crimes for a lifetime of prison, there were several other crimes that he never admitted to, whether it was because there were no more witnesses or he just wanted to hold that truth over the survivors. This second story is very much about confronting your history, as Jessica explains to Luke Cage what exactly happened to her when the Purple Man took control of her body and her life. She lived for eight months of trauma and abuse and was completely powerless to do it. 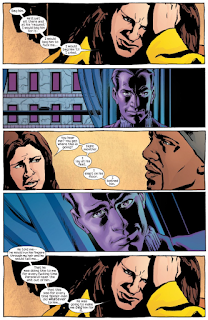 When the Raft gets a massive breakout, including the Purple Man, Jessica gets the confrontation (that she never asked for) against the man who held her hostage. With the help from a psychic trigger placed by Jean Grey, she finds closure and puts the Purple Man away, as quickly as he got out.
While Jessica was hooking up with Scott Lang, Ant-Man, she discovers that she's pregnant with Luke Cage's child. By the time the whole action is over, there's a heartfelt page where Luke expresses his emotions for her, and the two of them decide to go it together. A very human story about trauma, concludes with a very human story about love. Can't complain there. 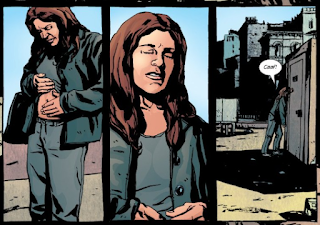 Alias birthed a breakout character and concludes with a big cliffhanger to be followed up in The Pulse. My library has the complete 300-page collection, so I'll be reading that too.
Here's my read-through of the 2001 Alias:
Volume 1
Volume 2
Volume 3
Volume 4
Follow chezkevin on rss | twitter