Hey party people. For those of you who missed it, Marvel shipped out previews for their Ultimate Spider-Man Premiere comic this week (this is the comic adaptation of the upcoming cartoon on Disney XD this Sunday). This is the full first issue: if your shop didn't get ahold of this, you can still obtain a free digital copy from comiXology (mine didn't). The link is here. 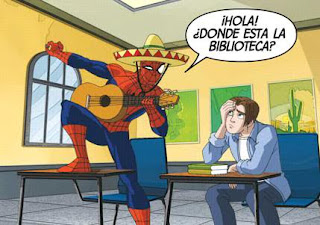 There's no credit for the art, so I'm assuming it's all screencaps from the first episode. Even so, it all works together, and I chuckled at a lot of the site gags in the comic. I don't have cable, and I don't intend on watching cable, but I hope this cartoon takes off.

Now for this month's highlights! 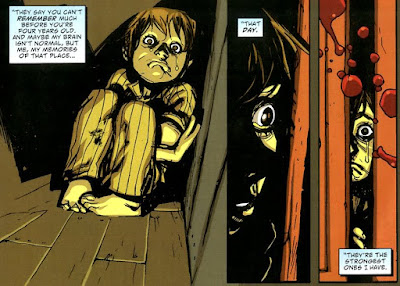 This is a good horror moment that continues to explain Travis Kidd's hatred of vampires. Put within the context of the comic (a high-octane fight between Travis and Skinner, the American Vampire), it's out-of-place and muddles the comic's tone. 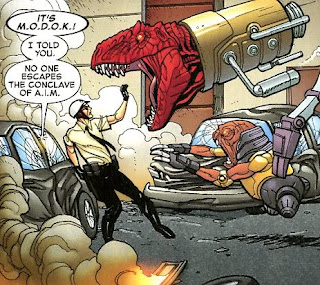 Is there nothing more terrifying than a dinosaur's head on a rocket? Is America -- nay, the world, ready for rocket rex? 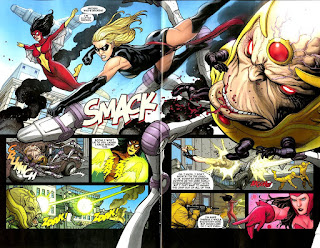 Check out the way M.O.D.O.K.'s legs frame the page. That huge leg in the middle tells you to read the left panels, before moving onto the right. Do you see that hint of a leg in the lower right corner? The white background of the webpage obscures it, but when you're holding it in real-life, it mimics the crease of the page, inviting you to turn it. Holy shit, Frank, that's amazing. It's a perfect visual story on these two pages.


Daredevil #10
by Mark Waid and Paolo Rivera
I think Daredevil was phenomenal this month. I'm a little miffed that the Buy Pile doesn't agree with me, but, I genuinely feel that every page is worth showing to you. Since copyright laws, here are two clips about mortality: 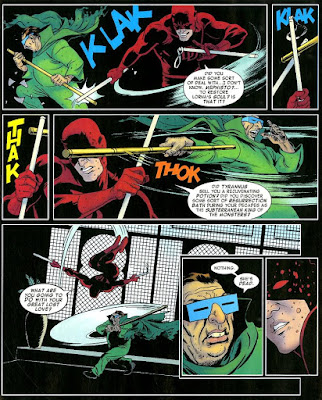 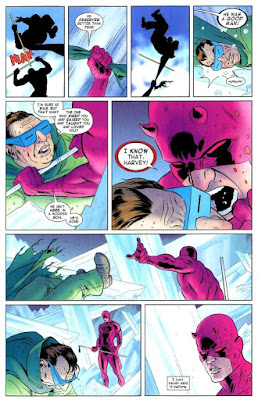 Really heavy stuff. Matt's escape scene from the giant cave monster is detailed in the previews as well: the full three pages are nothing short of brilliant, visually and word-ually. Check it out for yourself.


The Flash #7
by Francis Manapul and Brian Buccellato 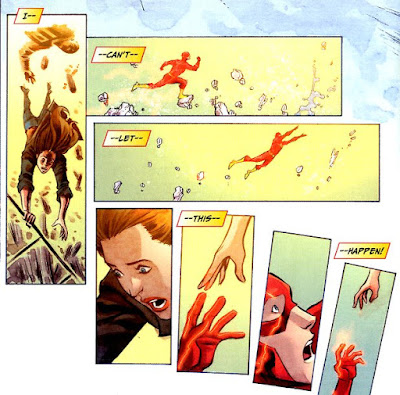 The Flash seems to be fighting an uphill battle, since every time he uses his powers, he runs the risk of opening up a wormhole, which Iris West finds herself in. And, everyone in Central City blames him for the power blackout. The Flash is getting an unusual amount of bad PR, so here's to hoping that it gets better.

After the conclusion of Capt. Cold's storyline, there's about 6 or so pages of checking in on random people, from Gorilla Grodd to Director Singh and Patty Spivot. It's the weakest part of the issue. What the creative team needs to do is, to focus on a story and tell it. Organize your thoughts. 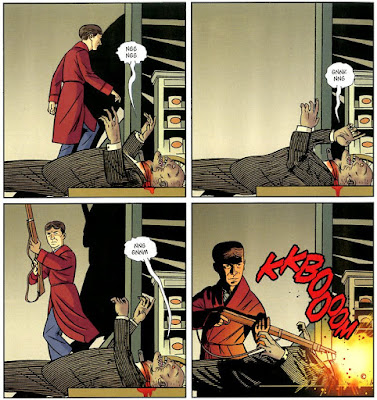 When it comes to zombies, you're going to be killing a lot of them, so the more creative the better. Here's one example from the (six-page!) preview for The New Deadwardians. I liked it enough to pick up the issue, and I think you should give it a try too.

What follows are the highlights for a few comics, that I haven't gotten around to talking about yet. I'll get to them next week if I haven't collapsed in a pile of my own mucus (I'm sick by the way).

The Secret History of D.B. Cooper #1
by Brian Churilla 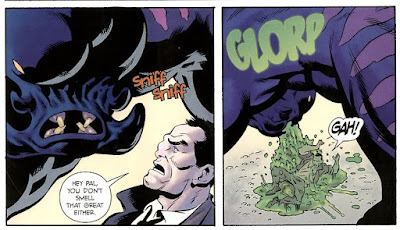 I dig that this was 22 story pages, with no ads. I dig that this is coming from the work of one guy. I dig the secret-agent-that-assassinates-monsters-in-the-dreamworld-and-kills-their-people-counterpart-in-reality vibe. What I don't dig is that this was $3.99, without much to justify it. I picked this up on Don MacPherson's recommendation, but I won't continue it, unless in collected edition down the road.


Thief of Thieves #2
by Kirkman, Martinbrough and Spencer 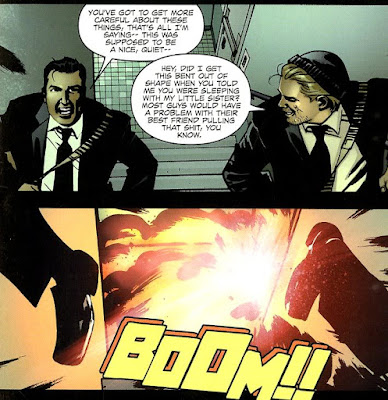 A very flashback-heavy issue, with a killer final page. Redmond isn't a complete character to me yet, but he's getting there, and I'm interested in reading more. Tell me a story guys. 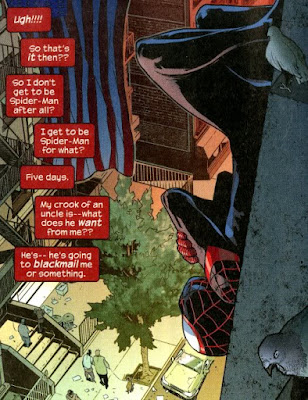 What a great pose! Spider-Man's been around for 40+ years, I've been reading him for about 10, and let me tell you that I've never seen a panel like this. Keep it coming.