Azzarello and Risso made a name for themselves in Vertigo's 100 Bullets, but Broken City is their first foray into the superhero genre.

And it's a doozy. Azzarello accomplishes this wonderful noir, gritty dialogue, complemented by Risso's high-powered pencils. Batman explores the whereabouts of a missing man, and tears apart Gotham City to do it. Along the way, he suffers these terrible visions of his parents' murder, and struggles against the current to bring justice to a broken city. The six issues push the genre forward, they push the medium forward and they push the characters forward. Get your hands on this if you can.

That's really all I have to say about it. I'd like to spend the rest of our time together showing you a few excerpts from the comic book. Here's some internal narration from Batman, in the middle of an empty warehouse as he meets the Japantown mobsters Fat Man and Little Boy:

--er than I realized.

No. BEFORE I realized.

"FAST" was TOO SLOW a word to describe the way SHE moved. . . 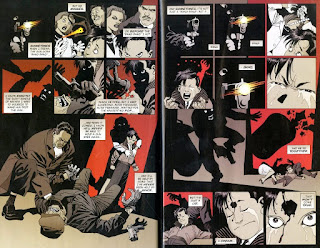 The visual storytelling is superb. I'm so glad I borrowed it from my library. Here's Batman confronting Killer Croc, who's been re-imagined as a cannibalistic mobster: 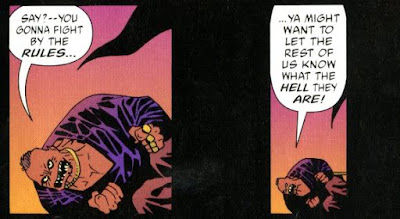 Don't you just love the dialogue? I do. These guys know how to tell a comic book story. Here's some more narration from Batman, as he roughs up Fat Man and Little Boy:


I could have been GENTLE.

I could have gone EASY.

I could have tried to REASON.

And, one last BONUS SCAN, of Batman using a stripper pole to kick Killer Croc in the gut: 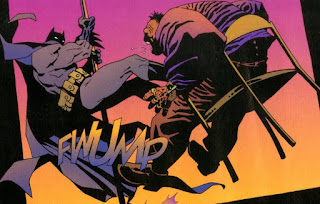 If you're interested in reading more scans without my commentary, here's a direct link to the first scan I took. Just press "Next" and you'll be able to read through them all.

If comic books have a tendency to deal with the absurd, then Impossible Man deals with the beyond absurd. Impossible Man is an alien who, from time to time pops up to muck around with the affairs of the Marvel Universe. In an attempt to cure his boredom, he hangs around the superheroes like an uninvited child on "Bring Your Kid to Work Day." This trade paperback collects his stories, from his first appearance in Fantastic Four #11 in 1963 to the 90s Summer Spectaculars. 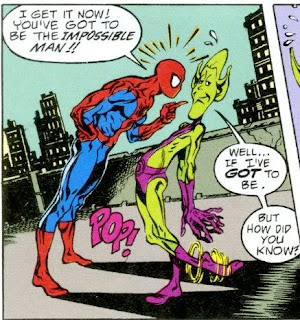 Each story is an interesting diversion that will entertain the reader for the moment, but there isn't much substance to them. Imp Man occupies one character's comic book, for one issue, and by the end of it he flies off to bother someone else. The issues are nice to look at, due to the visual gags, but there isn't much more to take away from it. For the well-read comic book reader, this doesn't deserve to be more than a footnote.