I'm going through the archive and re-presenting some old posts that never saw much attention. It's been four years, so I think it's safe to say that you, my current readership, have not laid eyes on them. Today I'm looking at a unique character find from 2008: Misfit, from the Birds of Prey title. I think it's fun, and I hope you will too. This post was originally presented on July 9, 2008, and the link can be found here. New content will be up Wednesday and Friday, and another classic will be presented on Thursday.

Before you leave, don't forget to partake in this week's blogiversary giveaway: I'm giving away paperback copy of Grant Morrison and Dave McKean's Arkham Asylum. Click here for the deets!

You know the drill: new comics on Wednesday, so I of course planned on getting my new comics today.

I was hoping to get them after running an errand at my cousins', but then I got caught spending some quality time with them.

Before I knew it, it was six PM, and my comic shop was closed! Dammit!

I am so sorry guys. I feel like crap, so, wallowing in my self-pity that I actually missed a new comics day, I took a bus to the nearest cliff, and contemplated how long I'd have to spend in an oven to -- oh wait! 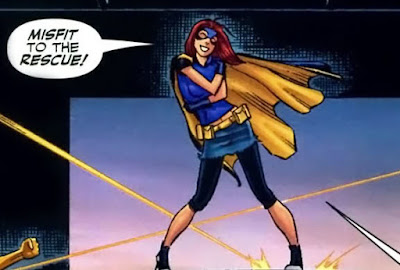 Misfit originally thought she could be Batgirl. . .

But that brought up bad connotations for Barbara. . .

Sorry again about the lateness, guys, and feel free to thank Misfit for saving the day! I know I will.
I'll get new comics tomorrow, so that's when they'll get on the blog.

Email ThisBlogThis!Share to TwitterShare to FacebookShare to Pinterest
tags: Birds of Prey