blogiversary recap + the next two weeks

Sharp readers will notice that I was supposed to announce the winner of the giveaway from last week's offering of Arkham Asylum. Nobody participated. I put a fair amount of effort into getting that post out there, but the results are less than ideal. I was originally planning on continuing these giveaways for the month, but I don't have the energy to promote all that again, yet. I'll try again later.

I had my last final this morning, and I had a big phone interview. Suffice to say, I'm a little exhausted, and I'm going to spend spring break next week, visiting my sister in New York. If you guys know of cool things in New York that I should do, do recommend them in the comments. 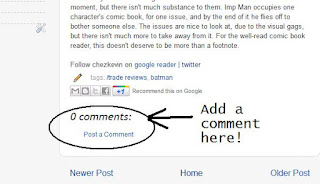 Over the next two weeks, this blog will be on a scheduled break and there will be empty space here in between. I hope to use the time to recharge my batteries and come back in April to talk more with you, the well-read chezkevinisto/ista, on those most comic of books, comic books. In the meantime, here's where else you can find me on the internet.

Photobucket: My username on this thing is airhikec001, and it's the main place I keep my scans for this blog. There's also a slideshow on the left bar of this blog, of my numerous uploads. I'm at 2,137 images, as of this writing, which occupies 2.5 GB of the 10 GB limit. I have several images on my Picasa Web Album from Google as well, but I prefer Photobucket, because it's easier to sift through every photo. 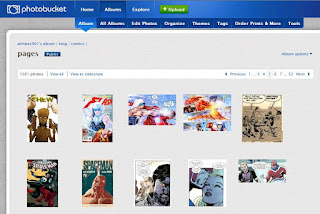 Quick readers will note that I post scans in the "pages" album, sometimes a week before actually blogging about them. This is a good way to tell the future, and see what I'm going to blog about! In fact, I have a page-worth of scans from Comic Book Comics and Mega Man that I'm not going to talk about until at least a week. Uploads on this site will be sparse going forward into the next two weeks.

Twitter: My username on this thing is chezkevintam. chezkevin was actually taken, which was a little disappointing. 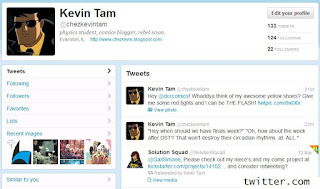 I talk about my life, which is surprisingly about more than comic books. If you too have a twitter, let me know! Let's follow each other!

Swap.com: I've realized that I don't need several of the comic books in my possession, and, even worse, I don't care for some of them. So I've put them up on swap.com to try to trade them in for other items. ifanboy.com actually referred me to this website in one of their superior op-ed articles, and I'm hoping to get some good comic book mileage out of this. If you have a few comic books you don't care for, consider using this website. 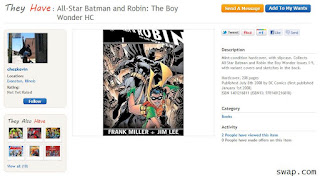 I also have a mapmyrun.com, because I'm an occasional jogger, as well as a facebook. If you look hard enough, you can find the Kevin Tam that's me. I also keep a livejournal, which is an archive of my blogging experience from high school. So, in summary:
Follow chezkevin on rss | twitter