Comic books and Tumblr: Four blogs I look at that you might want to look at

The blog is a perfect place for comic books. The medium lends itself to strong, emotional opinions in its fans, and blogs are good places to lay down a rant, or hype up a new title you're excited about. Comic book fans tend to be few and far in between, so the internet tends to be a better place to talk about the armpit webbing on Spider-Man, than your next-door neighbor. In fact, the tagline of a particular blog, "Too Busy Thinking About My Comics," states that the blog is to leave the super-hero detritus online, so it doesn't interfere with real life.

When you come down to it, the blog is a great place to talk about comic books, but with the vastness of the internet, there are a few other venues that have opened up the comic book dialogue. I'm talking about the photo blogger called Tumblr. Since those things are oriented around images, they're the ideal place to discuss comic books, a visual medium. Today I'm going to offer four comic book tumblrs for your viewing pleasure.

The blogger of remembered heroes is a writer, who convinces her friend Jojo to draw super heroes and other assorted characters from memory. It's a joyful look at how super heroes have become part of a common consciousness, because sometimes Jojo doesn't remember the character, or she spices up a classic design, and she draws Aquaman with a shark-hand. 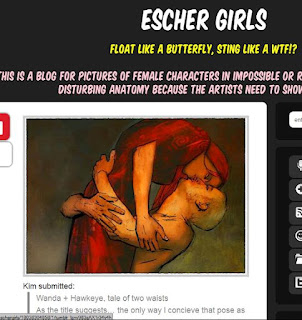 Eschergirls presents daily photos of misrepresentations of the female form in comic books. It's an incredibly common occurrence, so you know they'll never run out of material. This is one thing that's so common about comic books, that you don't really find in other media: crazy dedicated fans that point out its numerous flaws. You don't really get these kinds of fans for, say, Law & Order or something (do you? I'm just throwing out a television example. And by the way, Criminal Intent > SVU). 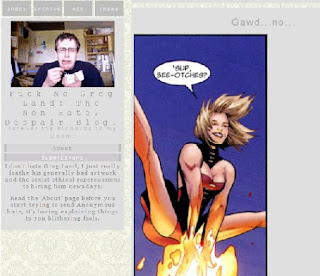 Keeping with the representation of the female form, there's an actual tumblr dedicated to Greg Land. It's amazing how much Bad Things get discussed in comic books. People have ranted on about the bad things they found in a comic book they read, and so have I. At the heart of fuck-no-greg-land lies a devout X-Men fan who genuinely keeps up the blog to improve the state of comic books. Good luck, blogger-person. 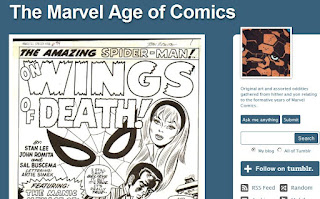 This tumblr's title refers to the Marvel Age of Comics, a very optimistic time when comic books were still a new, uncharted medium to explore. It regularly posts original art from this era, and it's very fun to look at all of them. I like to guess at the artist before I look at the credits, because they're usually one of three choices: Ditko, Kirby or Romita Sr. Good fun!

So I don't have a tumblr myself, although I could, because I've uploaded so many images to my photobucket account (2k+!). This good ol' blog will do it for me.