Not years, sillypants! 500 posts! This post is my 500th, and that calls for some celebration: I'm giving stuff away! This week, and every week in March I'll be announcing a comic book trade paperback/hardcover for a giveaway. They'll all be in mint condition and contain a little doodle/note from me. This week's comic book for giveaway is: 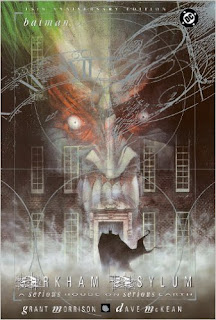 Arkham Asylum is a chilling look at what happens when the insane inmates take it over. Dave McKean provides paints to Morrison's script, as Batman winds his way through to save everyone. This series went on to inspire the video games for PS3 and XBOX360. This is the 15th anniversary edition paperback, which also reproduces Morrison's annotated script.

HOW YOU CAN WIN: Leave a comment on this blog, on this very entry, with your name and e-mail address. I am going to have to discriminate in that only participants with a US address can enter. That's it. I'm going to provide the shipping myself, and I just don't have the dough for international addresses.

WARNING ON ENTERING YOU E-MAIL: Don't write it in the comments like GeneralZod@kryptomail.com. Phishers will phish you. Instead, write it like:

WHEN THE CONTEST ENDS: The giveaway will be announced on Tuesday morning, and it will always end on Sunday 11:59PM Central time. I will use the Monday to pick a winner, and I'll announce that winner on the following Tuesday, with the new week's giveaway. This means that you will have roughly 6 days to enter for the giveaway, so please check the blog weekly so you don't miss out. Again, make sure to leave a comment with your e-mail, and good luck!

Email ThisBlogThis!Share to TwitterShare to FacebookShare to Pinterest
tags: batman, things that are impossible