Issues 1-5: A Norman Osborn story that establishes Jessica's new status quo: she accepts a job at the Daily Bugle working for J. Jonah Jameson, under the new title of "The Pulse," a superhero-centric offshot. She's a creative consultant, which seems to be just as ambiguous as Jonah wants it to be. It ends the way you'd expect a Green Goblin story to end -- but with some big implications like Ben Urich knowing Spider-Man's identity.

It's all underscored with Jessica's pregnancy -- a pregnancy that's threatened during a Green Goblin attack, and something they go back to consistently. Below is a great page, but it's a little annoying how young Bagley makes the characters look. In this dream, Jessica looks just as young as her daughter. You can hardly tell who is who! 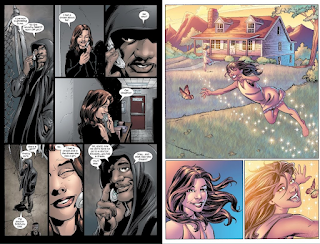 Issues 6-8,10: A 4-part spy-esque drama. Somebody blows up Luke Cage's apartment, and then later his apartment. There's mentions of Nick Fury's Secret War way back when, but it's so hampered by this expected prior knowledge that the secrecy comes off as obnoxious. Just look at this page of talking at Jessica. You don't even need to read the text itself; it's just all infodump. 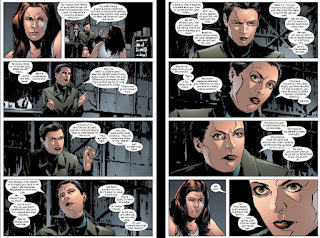 It really just sounded like Bendis wanted to tie up a loose end from that storyline. The artist changes to reflect the darker mood, but a lot of his faces are a little rough around the edges.
Issues 11-14: Jessica Jones delivers her child -- and Ben Urich investigates a strange case of Daredevil-related robberies! These two stories happen concurrently and they're easily the best storyarc of the series. Jessica meets with Susan Storm to talk about children, and her friend Carol, before her water breaks and she has to take her baby in for delivery, 3 months early. 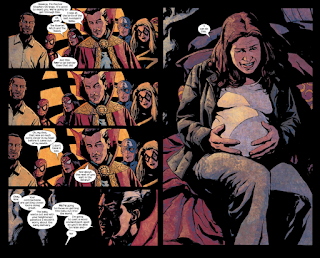 The D-man arc is exactly what I love about Bendis's storytelling. He has this way of taking old Marvel lore and gives it a new, gritty take. D-Man was originally a member of the Avengers -- the real ones, not the West Coast ones -- and the last they left him, he had decided to be a superhero for the homeless, choosing to live among them. Urich looks for D-Man to find the truth behind a string of robberies, and it reveals a surprisingly mature look into mental health. 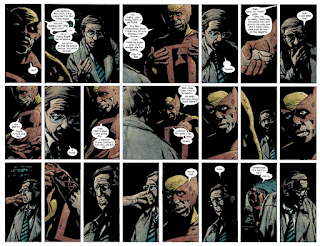 New Avengers Annual #1: The Adaptoid crashes Jessica and Luke's wedding! The undercurrent remains of Bendis cleaning up his plot with secret Nick Fury stuff, but this one is still an enjoyable superhero romp with gorgeous art from Coipel. Eagle-eyed readers will catch Stan Lee as the minister who marries Luke and Jessica.
There's something to be said about creator-owned characters, and Jessica is about as creator-owned as you can get in Marvel Comics. Bendis developed her from scratch and has integrated her into the Marvel Universe. She gets to grow, have a child, and gain a lifelong spouse. Certainly a rarity to have in mainstream comics these days.
Follow chezkevin on rss | twitter